It's certainly not a "pretty" photo. In fact, the dirty snow being caught in the blade of the snowplow is rather "ugly", no? But I like the contrast between the bright bits of color – the neon green in the upper right, the orange 'wands' on the plow blade, the signs on the fence (left of center) – and the overall whiteness and greenness of the shot. 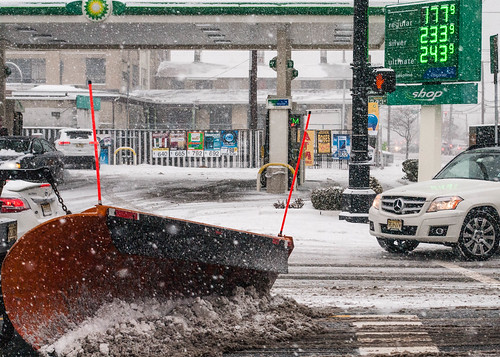 I like the composition, the plow coming in from the left, the car turning in from the right, the roofline of the service station at the top, the rectilinearity of it all playing against the angle of the blade.

And I like the visibility of the falling snow across the picture place. There are some flakes that must be fairly close to the lens, they're so large in the picture; you can see these particularly well against the blade. And there's a noticeable contrast between those large up-close flakes and smaller ones. They're in a satisfying range of sizes. They permeate the 2D surface of the photo as they permeated the 3D volume of the scene. Without that I might not find this photo so interesting.