Rahsaan Roland Kirk is one of my favorite musicians. I first heard him on his album, Rip, Rig, and Panic, probably in the summer of 1966 or perhaps that fall. I heard him live three times, once in Baltimore in 1969, once a couple years later (but before I went to Buffalo in 1973) and then finally in 1977, in Buffalo. This is about the first time I saw/heard him live. It's from my book, Beethoven's Anvil: Music in Mind and Culture (Basic 2001, pp 4-6). 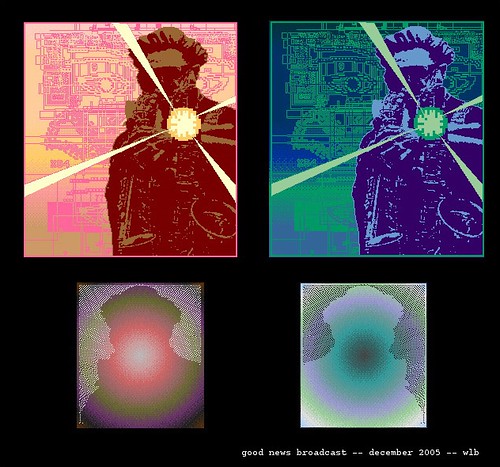 Sadness and tenderness are certainly not the only emotions elicited by musical performance. Joy and exaltation demand our attention as well. Rahsaan Roland Kirk was the most reliably joyful performer I have ever seen. I first saw him at the Morgan State Jazz Festival in 1969. It was outdoors, and at night. Bright searchlights beamed onto the stage. As Rahsaan walked onto the stage the light splintered from his black vinyl jump suit and from the complex textures created by the mantle of musical instruments Rahsaan wore like liturgical vestments. He began by rapping to the audience as he walked onto the stage, “They can keep us off the radio, but they can’t keep us outa’ the air!” He then took his band into the first number, “Volunteered Slavery,” a raunchy blues proclaiming that “If you want to know what it is to be free/ you gotta’ spend all day in bed with me.” Rahsaan did not have much of a singing voice, but he delivered the lyrics with force and vigor. He then took up his tenor saxophone and began to conjure a solo up out of the ground.

Rahsaan was a skilled and muscular saxophonist able to perform in a variety of styles from 30’s swing to 60’s freak-out. On this occasion he played straight-ahead all-out blues that achived lift-off.[ ] Rahsaan was playing a multiphonic riff on three horns at once and then simplified it to playing just the tenor sax, while his side men were riffing away. Rahsaan settled on one note and held it as the riffing grew louder. The drum figures became more complex, the piano riffing more insistant and, above all, Vernon Martin let loose a mighty thunder on the bass. As the thunder crested Rashaan began playing the concluding riff from the Beatles’ tune “Hey Jude” on his tenor sax. The musical thickness cleared away, Dick Griffen switched his trombone riff, and the audience let out a gasp. We rose to our feet with some standing on their seats. People were clapping in time to the music and swaying back and forth, together. Rahsaan had us and we were pleased to have him.

Who orchestrated this activity? In one sense the question has an easy answer: Whoever organized the 1969 Morgan State Jazz Festival. But that isn’t quite the question I’m asking. In a different sense, Rahsaan and his musicians orchestrated their performance. How did they do it? Part of the answer is traditional and banal: they practiced. Through that practice they’ve developed routines, signals, and an intuitive sense among each of them of how each of the others shapes, moves and reacts to musical flow. For all its rhetoric of spontaneity,jazz is a highly rehearsed music. The sequence of events in “Volunteered Slavery” might have been fully scripted before Rahsaan first played it with the group, though I doubt it. On the other hand, it may simply have happened that way in performance or rehearsal and worked so well that they made it their standard performance. The routine may reflect a self-organizing process typical of such musical collaboration. In either case, the performance rests on hours upon hours of rehearsal and practice by these musicians, individually and as a group.

Whatever happened among the musicians accounts for only part of the event’s orchestration, the part that happened on stage. Who organized the audience so that they knew when to gasp and rise to their feet? No one. That’s the most interesting component of this orchestration.

Of course there are conventions one follows as a member of a concert audience. You sit in your seat; you don’t talk during the performance; you applaud after a solo—this was a jazz concert, and applause after solos has been the convention for decades. And you applaud at the end of a number.

There were no conventions regarding gasping. As for clapping to the music, and standing, there certainly were people in the audience for whom those were conventional responses, as this behavior is common in churches that favor enthusiastic song from the choir and parishioners. But this was not such a church; it was a jazz festival. Beyond that, there are no conventions governing standing on one’s seat. That just happened in the enthusiasm of the moment. What I find so interesting is that so many people got enthusiastic at the same time, a time that made musical sense. People rose to their feet and then to their chairs at a point in the music where there was a major shift in the energy.

Such behavior needs to be explained—something we’ll think about later in this book. For now I would like simply to note that the distinguished historian William H. McNeill has argued in his book, Keeping Together in Time, that coordinated rhythmical activity is fundamental to life in society. By dancing together to music, by marching together in military drill, we bond with one another and become a group. In McNeill’s view human society would not be possible without such activity. Music and dance are not mere luxuries consuming resources. They are every bit as fundamental to our life as hunting or childrearing, but fundamental in a different way.