Friday Fotos: Back to basics, a graffiti primer [#EmergentVentures]

Graffiti is a cross between art and extreme sport.
– Susan Farrell, Art Crimes

It all started with the tag, or hand-style. A few quick strokes and you’re up. Then on to the next one. And before you know it you’re all over town.

Here’s a tag I spotted on December 28, 2007, on a freight train rolling through Jersey City on the River Line: 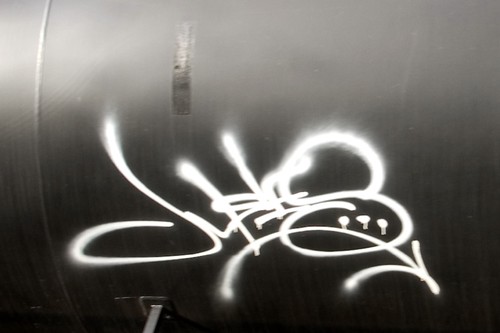 So quick! So elegant! Less than a dozen strokes.

Then we have the throwie or throw-up. It’s a bit more complicated than a tag and so takes more time to execute, a few minutes or so – and remember, in this game, time is critical as you’re always looking over your shoulder for the p-o-l-i-c-e.

This one is by SOMER. I took the photo on November 22, 2006, somewhere in downtown Jersey City, though I forget just where. Notice the strokes in the fills. This was quickly done. 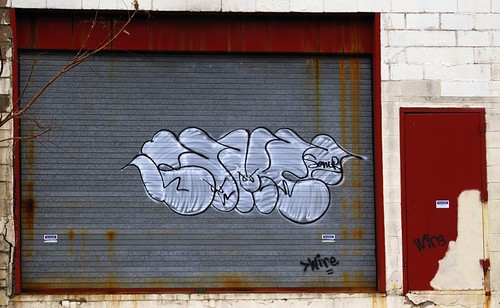 Though this is not a particularly elegant throwie, I chose it because Somer took part in a graffiti battle that unfolded in Jersey City in late 2006 and into 2007. Writers would go over one another’s tags, throwies and pieces. Somer lost. You can find a partial photographic record of this battle here, https://flic.kr/s/aHsiPU7cVa.

Now we come to a piece, short for “masterpiece”, the large and often quite elaborate works conceived originally to cover much or all of the side of a subway car. This is an early RIME (aka Jersey Joe), again in downtown Jersey City, somewhere a bit north of 14th Street (the building in the background is indicative) on a wall that no longer exists. I took the photograph on November 26, 2006. Judging from the “’02” at the upper left, I’m guessing this went up in 2002. 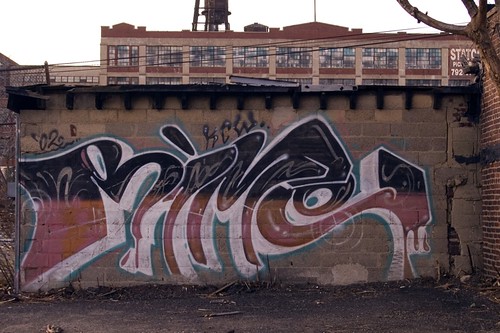 Next we see something a little different. The mummy below is what’s known as a character, a representation of some human, animal, or other animate creature. Characters started appearing in graffiti in the early days (1970s) and were often cartoon characters. One famous writer was known by the name of the cartoon character that appeared often in his work, Dondi. This is by Faro. I took the photo on June 6, 2010 in Hoboken, NJ (on the northern border of Jersey City). 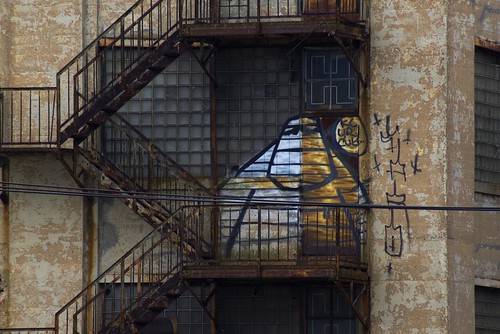 Finally, one of my all-time favorites (below). This is a piece where the writer’s name is inscribed inside a character. In this case the character is a triceratops. As for the name, you might not even realize that it’s a name if you didn’t know that, with graffiti, it’s (almost) always about the name. FWIW when I took that photo I was so new to graffiti that I didn’t realize I was looking at a name. And those names, as you might have gathered, are not birth-certificate names. They are nomes de guerre, taken for the purpose of getting up.

This name is an example of so-called wild style, where the letters are tricked out, distorted, sliced-diced-embellished and otherwise disguised so that only insiders can make it out. In this case the name is “Joe”, Japan Joe. I took the photo on October 25, 2006. I’ve been told, by someone who was there, that it was painted not too long before. 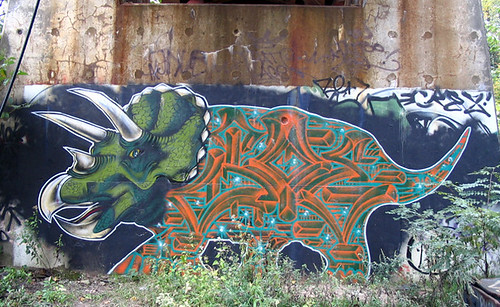 It’s a bit over seven feet high and eighteen feet wide. It’s painted on a stanchion supporting a single track railroad bridge for a line that’s now abandoned. Behind that stanchion, however, is a still active freight line. As it took a few hours for Japan Joe to paint this he no doubt saw and heard a freight train or two pass through. They are often quite long and so it might take a few minutes (5, 10?) or so to move through. This piece lasted until some time in early 2009 by which time the weather had eroded it to the point where other writers felt they could go over it without violating the (implicit) code.

This is in an area of Jersey City some locals know as Narnia because it’s more or less hidden, a bit mysterious, and green and leafy. It’s a magical anteroom to something even more mysterious and magical, the Erie Cut, aka the Bergen Arches. But that’s another story, though if you click on that link, you’ll find out quite a bit about the Arches.

What’s important now is that the place is hidden. You can’t see it from the street. That means that a writer can paint there without worrying about the p-o-l-i-c-e, though – word to the wise – I wouldn’t get too comfortable down there. Graffiti’s illegal; if you get caught you will pay a fine, perhaps go to jail. So either you do something quick – a tag or a throwie – and move on, or you find a secluded spot and paint your piece.

Of course, there is a third alternative. You can do a “permission” wall, even a commissioned wall. Here you’re working with the permission of the wall’s owner. In some cases you may even be paid, perhaps by the building owner, or maybe by, say, Red Bull, who is sponsoring an event or even the wall itself. Thus there is now a small group of elite writers who travel the globe getting paid for getting up.

Doing permission walls, though, is tricky, status-wise. Graffiti began as a game – and I use the term both in its ordinary sense, but also as a term of art in economic analysis – in which graffiti writers would signal their girlfriends and/or one another while at the same time evading the police. The more skill you display, the more status points you get. Visible virtuosity matters. You also get points for getting up in particularly difficult spots, difficult because access is physically challenging (some writers have been known to use mountain-climbing gear) or particularly exposed (to, you got it, the P-O-L-I-C-E). Exposure to danger earns you points. (And also gets the adrenaline pumping (I know).)

If you’re painting on a permission wall, you’re no longer in danger of getting arrested. Fewer points to you, even though you’ve got mad skills. Consequently those writers who are able to earn a nice living by doing commissions will also do illegals to maintain their street cred.