Olorun’s Botanica: A Little Note on Diversity in Jersey City 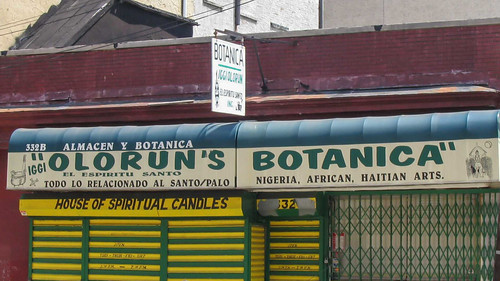 Sometime ago, 2004 in fact, I was walking around in downtown Jersey City and passed this little shop in a street off Newark Avenue. There were two windows. One had what appeared to be African artifacts, statues and masks as I recall. And the other had what appeared to be brightly colored plaster statues of Catholic Saints, reds and blues and greens, yellows, gold, dazzling. As you can see at the lower left, the store is only open four days a week in the afternoon and early evening, and not even that, I suspect, for I never managed to go by there with a camera when it was open. That photo’s all I’ve got.

“I know what this is,” said I to myself, “I know what this is”. It goes by various names depending on where it’s practiced: Santeria, Voudou, Palo, Abakuá, Candomblé, and Voodoo are some of the others. It’s a religion based on West African beliefs and practices and clothed in imagery taken from Roman Catholicism. Olorun’s Botanica is selling religious goods: incense, candles, herbs, medicinals, statuary, beads, charms, and so forth. And in Jersey City it makes sense, as the population is a quarter Hispanic, the Caribbean and Latin America.

Most of the signage is in Spanish, which I don’t understand, but “Nigeria, African, Haitian Arts” is clear enough. That plus what I saw in the window told me all I needed to know. And then we have, “House of Spiritual Candles”. I like that, the juxtaposition in the phrase, “house” with “spiritual candles,” “spiritual” with “candle”. It’s a house, were people live. But these people aren’t people, they are candles, spiritual candles, candles whose smoke and odor passes between the physical and spiritual realms, linking the two.

With that much, I don’t really need any Spanish to know more or less what’s going on. But still, I did a bit of Google Translate out of curiosity. “Botanica” I know, it’s (now) an English word. It’s a place that sells candles, incense, etc. “Olorun” surprised me, it came back as “god”, God’s Botanica. OK. “Almacen” = “Warehouse”, got it. I’d glossed “El Espiritu Santo” as something like “Spirits of the Saints”. But that’s not it. Google says, “The Holy Spirit”. OK.

What about “TODO LO RELACIONADO AL SANTO/PALO”? What’s that? I haven’t a clue. And notice that slash at the end. What’s that doing?

Here’s what Google said: “Everything Related to the Saint/Stick”. I follow everything but “stick”. What!? So I tried “Santo/Palo” and got “Holy/Stick”. Bingo! Now we’re talkin’. Incense! Still it seemed a bit strange. I tried “Palo” by itself and again got “stick”.

Bursera graveolens, known in Spanish as palo santo ("holy stick"), is a wild tree native to Mexico and the Yucatán Peninsula to Peru and Venezuela that inhabits the South American Gran Chaco region (northern Argentina, Paraguay, Bolivia and the Brazilian Mato Grosso). It is also found in Costa Rica, El Salvador, Guatemala, Honduras, Colombia, Ecuador, Peru[2] and on the Galápagos Islands. The tree belongs to the same family (Burseraceae) as frankincense and myrrh. It is widely used in folk medicine for stomach ache, as sudorific, and as liniment for rheumatism. Aged heartwood is rich in terpenes such as limonene and α-terpineol.

It’s a medicinal. So “Santo/Palo” is something like a holy medicine, sacred medicine, medicine that soothes body and soul.

And Olorun’s Botanica is not the only botanica in town. A couple blocks away you can get readings and advice, “Consulta Espiritual” – assuming it’s still there. As I said, these photos are from 2004. 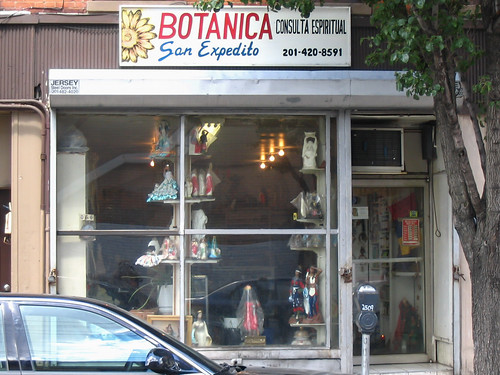 And then a couple of blocks from those shops, somewhere in between or above or below, I don’t know, but somewhere within the same general area of town, somewhere I spotted this: 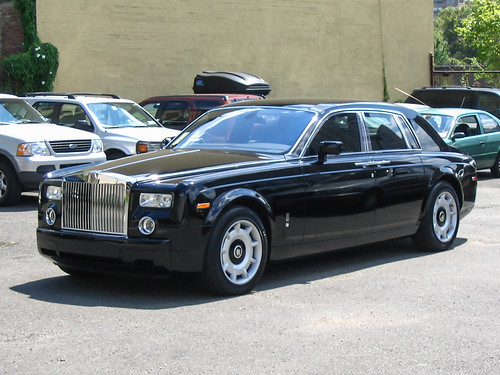 There's no winged-lady hood ornament, but if you look closely at the hubcaps you'll see a telltale “R”. Like I said, diversity in Jersey City. 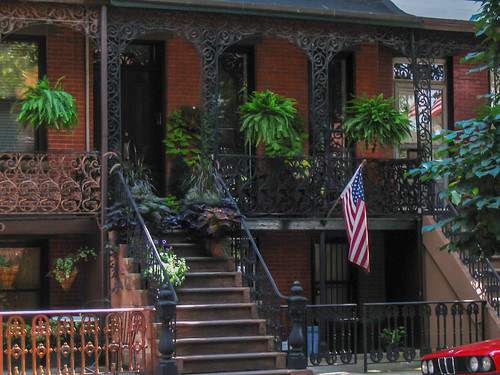 I know what you’re thinking, but no, that’s not the French Quarter in New Orleans. It’s in Hamilton Park, a few blocks from where I used to live.