Some New Savanna stats, top posts, and a mystery

Of course, I do keep track of stats here at New Savanna. This is a graph of all time views: 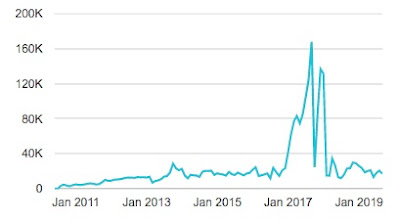 Notice GINORMOUS spike for (roughly) 2018. Of course I noticed the dramatic increase as it was happening, but I have no idea what was going on. People, bots, or both? I have no idea.

Meanwhile, my post on sex in Ninja Scroll not only remains the most popular post, but sometime in the last month or so I crossed up 100,000 views line to 101,137. It's one of the oldest posts on the blog, and that no doubt contributes to that total. But it think it's popularity is mostly because it's about a very popular anime and because it's about sex.

Then we have my post about "Pink Elephants on Parade", from Dumbo (73,690). Old, but not as old as the Kawajiri. Again, I think it's the subject.

Notice that it lags considerably behind the Kawajiri.


My third most popular post (at 14,794), which lags far behind the previous two (it's also much more recent), is a bit of a surprise. It's a post about Miyazaki's last feature, The Wind Rises. Anime, yes, and Miyazaki certainly is popular. But it's no 'flashy' in the way Ninja Scroll or "Pink Elephants" are.

What's equally interesting is that those three are the most popular posts day to day, week to week:

The next two posts are from the last couple weeks, as are the rest of the posts in the "Popular Posts" box (scroll down the middle or so on the right side of the blog). So we have three posts about animation, one Disney and two Japanese, as consistently being the most popular posts here, so that get read week after week.

Let's take a closer look. This is the top five for the last week: 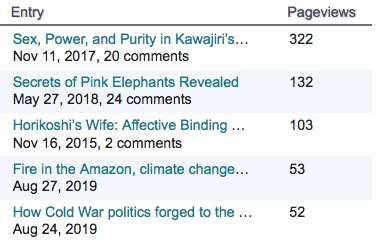 That's the same five as we saw previously. Here's the top five for today, as of 9:54 AM: 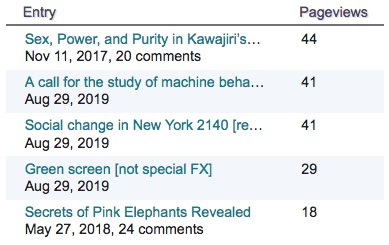 The Kawajiri remains at the top, but "Pink Elephants" has dropped to fifth, and the Miyazaki as disappeared. Finally, we have now, whatever that means, as of 9:54 AM: 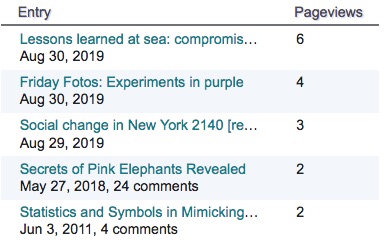 The Kawajiri has disappeared, but "Pink Elephants" is fourth. But notice that post from way long ago on June 3, 2011, Statistics and Symbols in Mimicking the Mind, what's that about? It's about computational linguistics and natural language processing. And, you know what, I looked at it earlier today, so that's probably my activity we're seeing there.