I recently posted a cybernetic analysis of Donald Trump’s presidency, Trumposaurus Rex @ 3QD – Toward a cybernetic interpretation. This is a relatively short (I hope) elaboration of that.

The idea is that, above all else, what Trump cares about his that he dominates the media, something he’s been able to do at least since he won the Republican nomination, if not before that. That’s what he cares about, how he appears in the media, cable news in particular, and that he’s driving the news cycle with his tweets, rallies, and whatever else he gets out there through press conferences, interviews, whatever.

What does that mean, concretely?

Controlling activity on the web

Let me digress to a quick look at my own very very modest media activity, primarily the papers I post at Academia.edu. Here’s some of the standard analytics available for users: 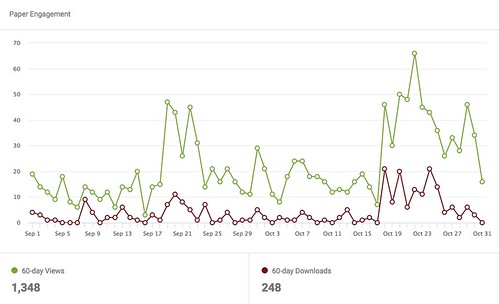 This depicts activity on my Academia.edu account over the last 60 days. The upper (green) line shows page views while the lower (brown) line shows downloads.

Notice that there are two dramatic increases in activity. One limited to about a week in the middle of September and the other starting in the middle of October and still going. Those are not accidents or flukes. I made those increases happen, consciously and deliberately. And I was able to do so precisely because I could examine those analytics and thus see the relationship between my activity, posting papers to the site as well as tweeting about them, and the response to that activity.

In the earlier case I’d posted a working paper about the Avita Ronell scandal. It had been dominating certain segments of the academic internet, blogs and Twitter in particular, and I had been contributing by writing my own posts. I gathered them into a single document and posted the to Academia. Now, this is something I do regularly (gather posts into a working paper ...), so there’s nothing unusual about that. But, knowing that this scandal was hot, at least in certain quarters, I figured I’d see a boost in interest in my Academia site. I was right, and I could see that it was that working paper that interested people.

That second increase is more complicated. I’d uploaded a relatively short piece with no particular expectations about its performance. I had it around and figured I’d upload it. But, for whatever reason, it generated a fair amount of action. So I uploaded another similar piece, and the action continued. I also uploaded a somewhat different short piece, with no particular expectations. But: Bingo! So, another short piece. Bingo! And a longer piece (like the first two shorts). OK, a little action.

What are the chances that I can keep it going? Off hand, not good. I just don’t have that much of what seems to be the right material to keep it going. No matter.

The point simply is that I was had a measure of control over what happened. Anyone who is active on the web has access to this kind of control. You make an action, see what happens, and adjust your strategy accordingly.

If you’re into that kind of thing. Which I am.

And so is Trump

But not specifically the web. Rather, all media: internet, broadcast TV, cable TV, newspapers and newsmagazines. He’s needy and greedy. He wants it all.

How’d he get it? He’s good news, by which I mean he does things that people will read about and will watch. And so he sells advertising dollars, which are particularly attractive to the (f)ailing MSM (mainstream media).

Why’s he such good news? Everyone has an opinion about that, but so what? The one thing most pundits seem to agree on is that he’s given a public voice to a large number of people who, rightly or wrongly, have felt neglected. The Base, Trump’s hardcore followers, who haven’t wavered in their support.

And they’re going the same thing I do when I look at my analytics and that Trump does when he watches cable news. They’re seeing themselves, their interests, and their actions reflected in the news. They cheer at the rallies and the media reports those rallies. The retweet Trump’s tweets and that keeps the ball rolling.

There’s a new game afoot, and so far Trump’s winning it.

What are we to do?

What to you mean WE, masked man?

The idea that Trump is stupid, which is popular in certain spheres, is dangerous and wrong. He may be reckless and narcissistic, but he’s not stupid. To be sure, he seems devoid of reflective analytic intelligence. But he knows how to work the news cycle. Call it animal cunning amplified by modern media. That’s what it is; stupid it is not.

On the use of web analytics to understand and even control action around you, see also my post, Getting a boost from Marginal Revolution, or into the weeds with stats [#EmergentVentures #WorldWideWall]