After I’d made my second post about Porky in Wackyland I figured that was enough, at least for now. To be sure, I’d noticed many things that didn’t make it in to either of my two posts, but that’s always the way these things are. You can’t get everything in, ever. The idea is to say what you need to say in order to make a coherent argument.
I’d set out to demonstrate that there was a coherent logic in this cartoon and that’s what I did. In my first post I argued that it had six sequences that differed from one another in their internal construction and action. In my second post I amended that analysis and argued for seven sequences.
But I couldn’t stop thinking about the film, and the thinking has been of the sort that demands written form. So here I am, starting a third post about Porky in Wackyland. I’m satisfied with the analysis into seven sequences, but I’d like to say a bit about one of those sequences, the fifth one, where Porky finally meets the do-do.
Through the faucet to the do-do
As this sequence opens Porky is passing a Wackylander wearing a sandwich board offering information about the do-do: 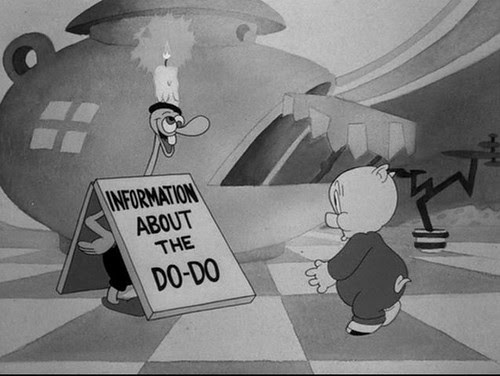 Porky asks where to find the do-do and he receives this response, which is not very helpful: 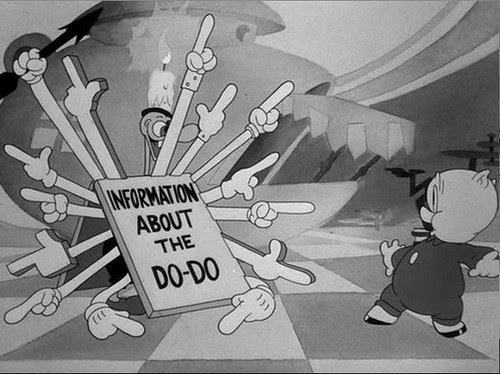 The vendor regroups, however, and makes Porky another offer: 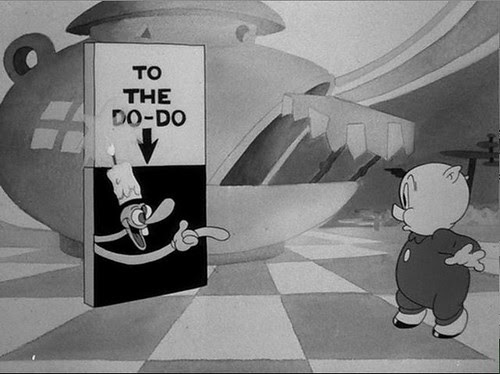 Notice that this frame depicts a situation that is physically impossible: Where’s the Wackylander? He’s not behind the sandwich board. He appears to be inside some space that opens through one half of the board. But that’s not consistent with other information in the image.
Read more »
6 comments: 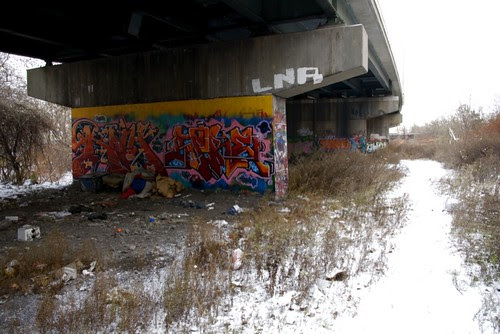 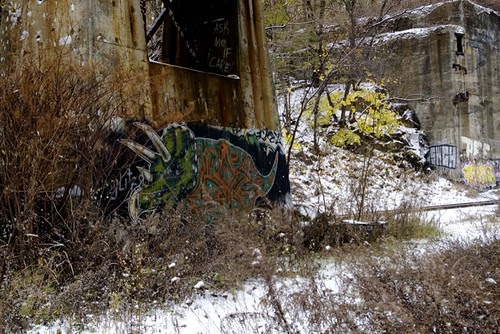 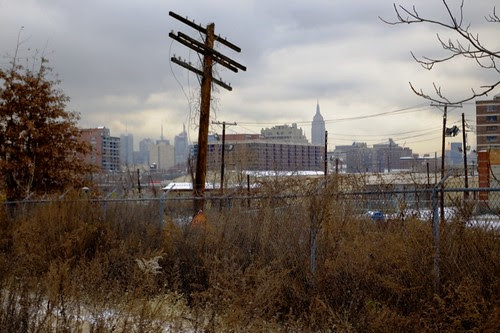 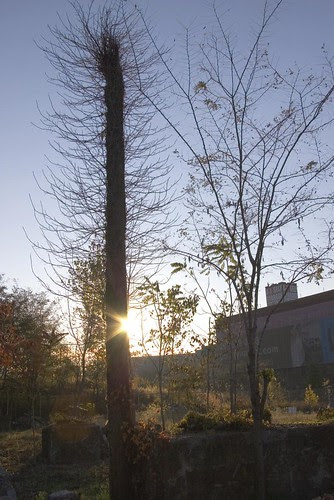 I continue to think about Porky in Wackyland and have decided to make another post about it. I missed something important in my earlier post and want to amend that analysis. There’s an extended gag involving a three-headed creature that comes in the middle of the cartoon. It deserves a close look.
Three Stooges in Wackyland
I’d argued that Wackyland has six major sequences:

I’m now inclined to think there are seven major sequences. There’s a segment at the end of the third sequence involving a Three Stooges gag that really needs to be separated out as an independent sequence. It’s musically distinct from what came before and takes place against a different background. That sequence runs about 28 seconds or so, from 3:35 to 4:03.
So the third sequence in the earlier analysis now becomes two sequences (3 & 4), for a total of seven:

Let’s start with sequence 3, which I’ve renamed “Flower-to-Flower: Wackyland on Parade.” As I indicated in the earlier post, it starts with this flower-character: 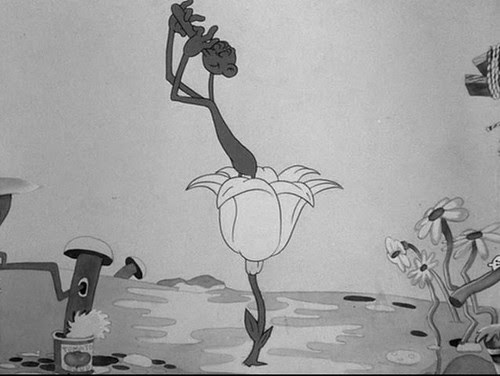 First the character is playing a pastoral melody through its nose; then it shifts to a drum solo as the music shifts gear to big-band jazz. Porky’s no longer on screen. For about a minute the action become very busy, wild music and lots of stuff on screen. There’s no central character or action to follow, but Porky reappears about halfway through the sequence as a peripheral character who reacts to what’s going on around him. He then disappears and the flower creature reappears, again playing a drum solo. The solo ends as the creature bashes himself in the head and ‘folds’ into the flower, which then withdraws into the ground: 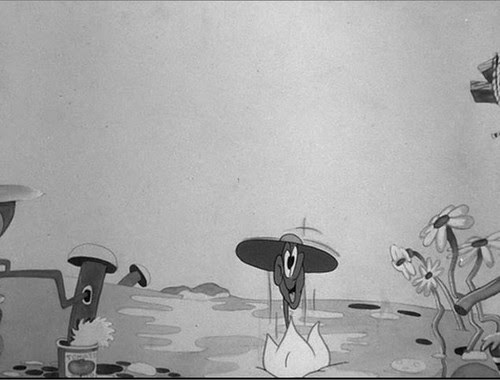 That’s the end of this sequence, which is clearly marked by the flower creature at the beginning and the end. There’s more happening in this sequence than one can parse in one viewing; it’s too complex and chaotic.
There’s an immediate segue, including slow moody music, to this: 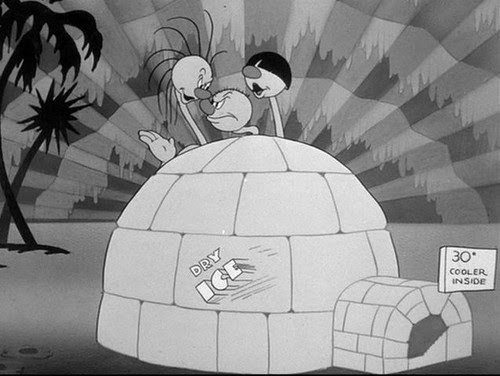 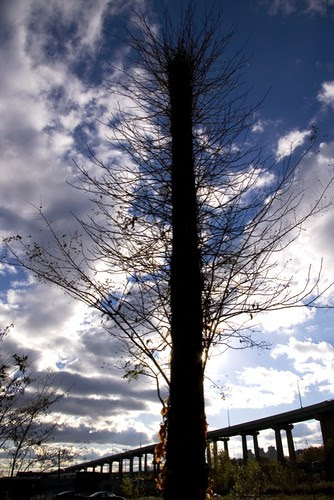 Throttled by the Military-Industrial Complex

Just before he left office in January of 1960, President Eisenhower famously warned against become inextricably bound to the "military-industrial complex." But, as James Ledbetter informs us on Blogginheads.tv, he was aware of the problem much earlier. Here's an excerpt from a speech he gave in 1953:

Every gun that is made, every warship launched, every rocket fired signifies, in the final sense, a theft from those who hunger and are not fed, those who are cold and are not clothed. This world in arms is not spending money alone.

It is spending the sweat of its laborers, the genius of its scientists, the hopes of its children.

The cost of one modern heavy bomber is this: a modern brick school in more than 30 cities.

It is two electric power plants, each serving a town of 60,000 population.

It is two fine, fully equipped hospitals. It is some 50 miles of concrete highway.

We pay for a single fighter plane with a half million bushels of wheat.

We pay for a single destroyer with new homes that could have housed more than 8,000 people.


Will ever escape the grasp of this terrible logic, which continues to impoverish us?
1 comment:

Porky in Wackyland is regarded as one of the finest cartoon shorts ever made. Directed by Bob Clampett for Warner Brothers, it was released in 1938 in black and white in the Looney Tunes series. Like many shorts, it has little plot to speak of. The story is straightforward: Porky Pig goes searching for the last of the do-do birds; finds him; but there’s a catch. The cartoon gets its dramatic interest from its gags, one after the other. In a sense, this whole cartoon is a gag, a gag called Wackyland.
The cartoon signals its waywardness just before the title sequence ends. A newsboy enters from the right, hawking a special edition about Porky’s expedition to find the do-do: 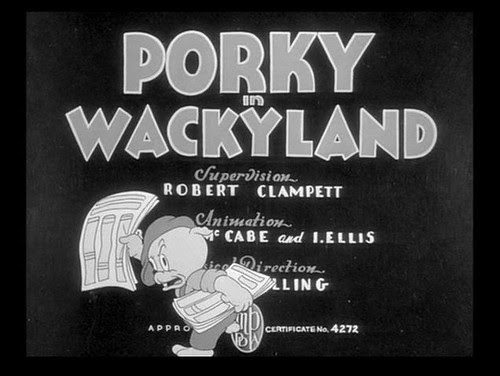 The intrusion of the cartoon proper into the title sequence puts us on notice that this is not going to be an ordinary gagfest. Yet, wacky though the film is, it is not without a simple dramatic order. The object of this post is to sketch that order.
* * * * *
The first task is to transport us from the newsboy in our world to Wackyland. The first move is simple; the newsboy holds the paper up so we can see it, full screen: 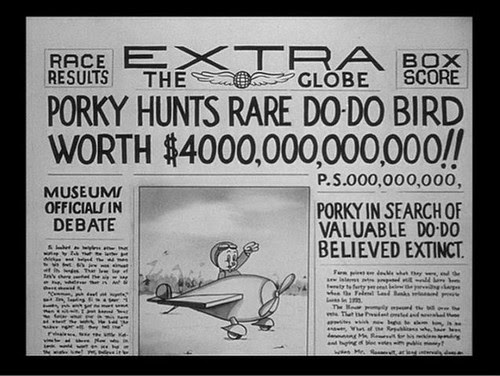 That front page is on the screen for 16 seconds before it fades to a shot of Porky in his plane in the air. That’s more than enough time to read the headlines, which are all that’s readable (at least on my DVD). Porky does a bit of flying, holds up a photo while telling us that, yes, this is the do-do, and then the camera zooms out so we can see the whole world. Porky’s plane flies a convoluted path toward Wackyland, which is in Africa. As the plane goes over Africa, we get a progressive gag. First it flies over a background in medium gray, which is labeled “Dark Africa” – at this point I suspect that many viewers will have anticipated what’s going to happen next. Then the plane’s over a darker area: “Darker Africa.” At this point one can feel pretty sure that Wackyland will be in an area of Africa that is black on the map and that is labeled “Darkest Africa.” And that’s what happens.
What doesn’t happen, however, is that Wackyland is populated with jungle flora and fauna and restless natives with bones through their noses and big kettles all ready for cooking missionaries. While such things were common enough in cartoons – think of the cartoons the Fleisher Brothers did with Cab Calloway and Louis Armstrong – Clampett doesn’t call on those clichés. The only significance of this “darkest Africa” is that it is remote, very remote.
Once we’re through that gag the camera zooms in on Porky and his plane and we see them land in an area that doesn’t seem particularly African or wacky. Look closely at the relationship between Porky and the plane: 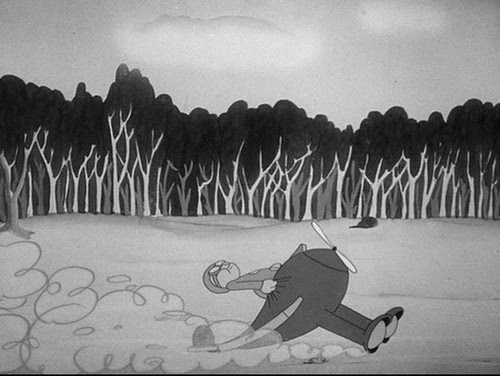 The plane is treated as an extension of Porky’s body, with the landing gear becoming an extension of his legs. That image, it seems to me, typifies the nature of the cartoon medium. The distinction between man, umm, err, pig and machine is all but obliterated; the machine itself has become animated and shares in the life of the pig.
Read more »
8 comments:

Ice on the Pond 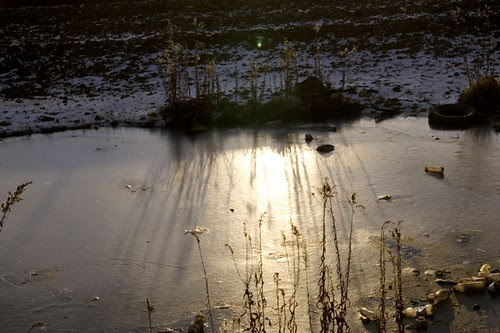 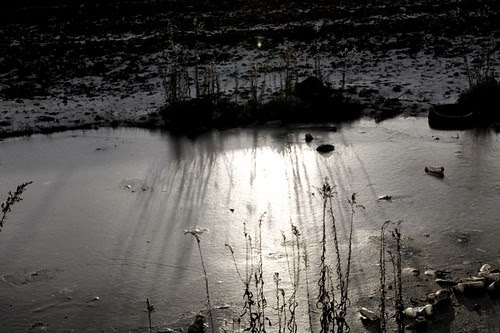 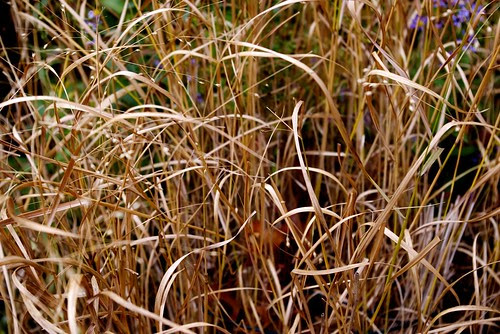