I'm bumping this post to the top of the queue for several reasons. First, current events have made it topical; it's about a film about rape. Second, it's one of the oldest posts on the blog. I originally posted  it in September, 2010; I started New Savanna in April 2010. Third it remains the most popular post here, with 73016 views as of now (6:22 AM on November 11, 2017). I've placed a downloadable PDF here:

This post is lightly revised from a set of notes I sent to Tim Perper in September of 2003. Perper is the scholar who introduced me to manga and anime. Yoshiaki Kawajiri’s Ninja Scroll is the first anime film I watched, on Tim’s recommendation. Hayao Miyazaki’s Spirited Away (and HERE) is the second. Again at Tim’s recommendation. Those of you familiar with anime know that those are VERY different films. And that’s what I was aiming for, maximum contrast. I have, for the most part, retained the informal style of the original note.

As you say, Tim, Ninja Scroll is a popcorn-muncher, rich with action, apparently poor in obvious deep meaning and significance. But no culture produces such complex and finely-crafted objects without packing them full of significance. And Scroll is oozing with it. Keeping in mind my general ignorance about Japanese culture, here’s what comes to mind.

Let’s start with the explicit – though certainly not pornographic – sex. It shows up relatively early in the film and, interestingly enough, in two back-to-back scenes. Surely we are meant to (subliminally) compare and contrast those scenes. So lets do that.

The contrast seems to be that between legitimate and illegitimate sex (that is, rape) between a powerful man and a woman he controls. Both men are large and hulking, but one is clothed in the robes of minor officialdom and has appropriately dressed hair while the other is semi-naked and bald. The two scenes, while both in dim night-time light, are depicted in different colors. 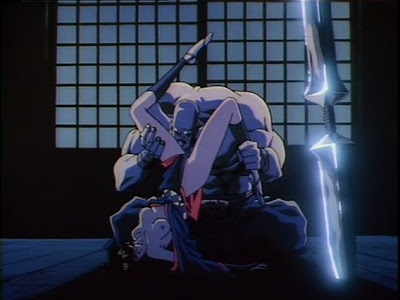 The (attempted) rape is in cool blues, greys, stark white and black while the other scene is in warm browns, tans, and brownish-yellows. Postures are different as well. In the official scene, the woman is on her hands and knees while the man is behind her “doggy” style. 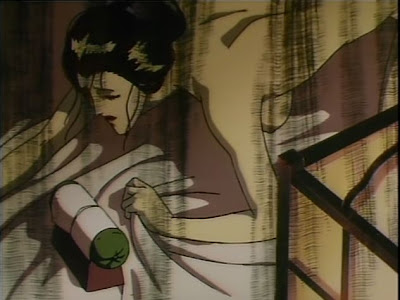 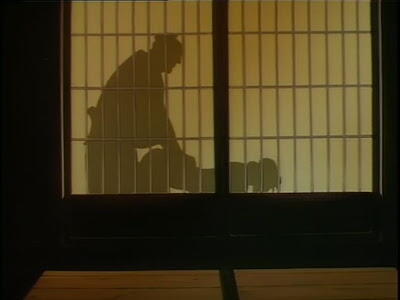 In the rape, the woman is almost upside down and the man moves her around like a piece of meat. Finally, the woman in the rape scene is silent while the other woman moans and cries out.

Notice that, beyond asserting that one scene depicts rape and the other legitimate sex, I haven’t said anything about the relationships between these people. The contrasts I’ve been talking about are all in the visual and auditory presentation of the scenes. This is by no means necessary to the social meanings, but this multi-layered patterning is how art is done.

Now, let’s consider those relationships. The woman being raped (first screen shot) is Kagero, the lone woman on a Ninja team of the Mochizuki clan. The rapist is Tessai, one of the eight Devils of Kimon, who are in league with the Dark Shogun to overthrow the legitimate government. Note that, when he gets angry, Tessai’s body becomes rock-like, making him an earth-man, just barely differentiated from the natural world. Kagero is the only survivor of the Ninja team sent to kill Tessai.

The man in the other sex scene is Kagero’s lord and master, Sakaki Hiyobu, who is the Chamberlain of the Mochizukis. You’ll recall that Kagero had to make a special plea to be sent out on this mission; normally, she served as food taster to the Chamberlain. The woman the Chamberlain is having sex with is unidentified.

The interesting thing about the Chamberlain’s sex scene, and the first thing about the movie to really capture my attention, was that the chamberlain moved easily and effectively between having an official conversation and copulating without ever withdrawing. As you’ll recall, this is the second of the two sex scenes. Kagero – who had been the woman in the first sex scene – has come back to report that she is the only surviving member of the ninja team. Kagero stays discretely at the doorway to the chamberlain’s room and gives her report while the chamberlain replies to her and thrusts away on his woman. 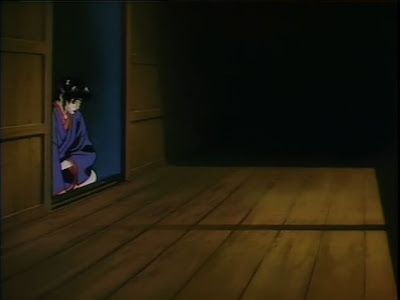 “What is going on,” I asked myself, “that we are being shown sex intercut with official government business?” What kind of sex is that? And, for that matter, what kind of government?

Whatever it is, this is not sex that involves a personal relationship between the parties. This sex act may be legitimate but, it certainly is not at the moral center of this movie. One can easily come up with arguments to the effect that this sex act is as much a rape as the other one – which I’ll get to shortly – but I don’t think the movie will sustain that reading. There is a legitimate social order in this world and that sex act is a part of the social order. But that social order is not the only thing in this world. There is also the world of the rōnin warrior Jubai, a samurai unattached to a lord.

And that brings us to the rape. As far as I can tell, the rape didn’t run the full course; there was sexual violation, but not intercourse. What stopped it, of course, was the arrival of our hero, Jubai. Just as Tessai was about to get really nasty with Kagero, Jubai appears in the room asking for directions. 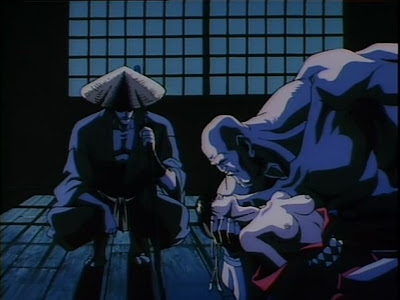 Tessai tells him to go away and Jubai, of course, refuses. A fight ensues and Kagero escapes with Jubai. It is then that she goes and reports to her master. Between these two sex scenes we have a lovely night-time conversation between Jubai and Kagero where fireflies mill about. Kagero walks off, stumbles and falls, and begins crying – about what? 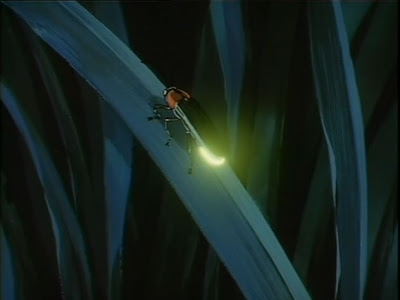 As she’s crying her vision lights on a single firefly and we see its luminescent organ turn off and on and then, WHAMO!, there’s a quick cut to the face and noises of the woman beneath the chamberlain. Of course, Kagero is as subject to the chamberlain as the woman he’s having sex with.

So, by this point in the film we’ve seen two very different versions of sex. First of all, they are visually different. But they are also different in their relationship to the social order. One takes place within that order, the other is outside that order. The film clearly rejects both. It’s taking its place somewhere outside that order.

What is there in this world outside of being raped by a man-mountain and having sex with a government official? There’s the relationship between Jubai and Kagero. Jubai is outside The System. But he gets drawn into the plot by a Tokugawa spy who poisons him. What’s the antidote to the poison? As the movie unfolds we learn that having sex with Kagero is the antidote. Her body is poisoned from all the things she’s eaten as official food taster. Her body will cure Jubai. But when she offers herself to him – freely, outside the bonds of either physical coercion or legitimate official privilege – he refuses. He isn’t interested in sex that is offered out of a sense of moral obligation, even if it means his life. 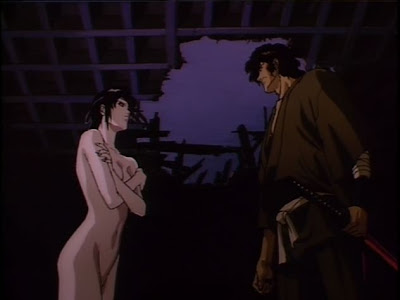 Think about that. While Tessai seemed to get some raw physical pleasure, it’s not clear to me that the Chamberlain was doing anything more than simply wielding power; after all, the act wasn’t compelling enough to preclude having an official conversation. And now Jubai gets an offer, and he turns it down. He’s obviously on a different moral planet from those other two men. And that, of course, is at the heart of the story.

It is only later in the movie, when Kagero is dying, that Jubai kisses her. And that, presumably, was enough to cure him. And thus he emerges alive at the end of the movie, and still free of The System. He alone saw Kagero as a woman, not as a ninja functionary, and that is why she fell in love with him and offered herself to him. Why did he refuse? That would have been a selfish act on his part; he respected Kagero too much to use her in that way, even if that’s what she wanted.

So, love conquers all. Except that Kagero is dead while Jubai remains alive.

There are, of course, many more scenes in the movie. And I certainly don’t want to attempt to deal with them all. But there is a thematic issue I’ve got to deal with – one which, I suspect, infuses all the scenes. That issue is purity and pollution – Mary Douglas’s territory (if you haven’t read Purity and Danger, you should; you’ll find it quite useful in dealing with this kind of material).

I’ve already mentioned that Kagero was officially a food taster. That she was looking for impurities. In consequence, she had herself become impure, which is what allowed her to cure Jubai. For Jubai had been coerced into the action by poison. A spy for the Tokugawa shogunate poisoned him and promised him the antidote only if he helped the spy against the Dark Shogun.

As the movie opens Shimoda village is hit with a plague, another form of impurity. It later turns out that it wasn’t plague at all, it was poison introduced into the well by minions of the Dark Shogun. What’s the Dark Shogun up to? He trying to overthrow the legitimate social order. As Mary Douglas will tell you, taboos, beliefs about pure and impure things, are ultimately about the social order.

So the Dark Shogun is up to no good. But what, specifically, are his minions doing at this village? They’re trying to secure a shipment of gold that had become grounded near the village. What’s the gold for? The Dark Shogun is going to send it to Spain in exchange for the latest weapons, which he’ll then use to defeat the legitimate government.

Now, to you and me, Spain is a moderately exotic nation in Southern Europe. To the Japanese, I suspect that Spain might as well be The West. So at one level Jubai has been drafted into an action intended to protect Japan from being further polluted by the West.

Back to those fireflies. They are fairly prominent in several scenes as I recall. And I will suggest that they stand in contrast to the wasps, which are used as weapons by one of the Dark Shogun’s henchmen. Wasps contain poison in stingers at the rear of their body. By contrast, fireflies emit light from the rear of their body. So even the insects have been recruited into this parable of purity and pollution in which love conquers all.

And so it goes, symbols within symbols. And all this within an action-adventure popcorn-muncher of a cartoon. Tricky stuff, these movies. 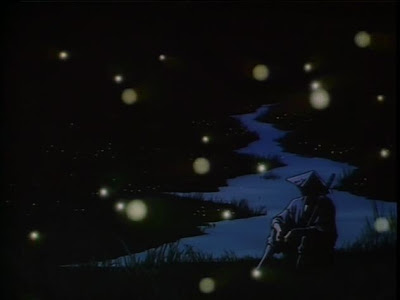