This is the second most-popular post on the blog. That, I assume, is because it's about an amazing and enigmatic bit of animation. Some day I'll return to it and take a deeper look. For now, I'm reposting it at the top of the blog. Enjoy.

“Pink Elephants on Parade,” from Walt Disney’s Dumbo, is one of the best known, and strangest, animated sequences that Disney, or any studio, has ever done (see clip below). It’s strange on two counts. In the first place, it doesn’t seem to advance the Dumbo story in any way. As the sequence begins Dumbo and Timothy Mouse are pleasantly drunk; when it ends they’re sleeping high in a tree. The sequence tells us nothing about how they got from one state to the other, nor does it tell us anything that’s otherwise going on in the movie. The movie is about elephants, the sequence is about elephants, pink ones; and that elephant connection seems to be all that links the sequence to the larger plot.

Putting that aside, is there any order within the sequence itself or is it just a collection of strange gags? This is the question that interests me. And my answer is that, yes, there is some order there. There is a progression.

Let’s start at the beginning. Dumbo and Timothy have drunk water that was accidentally laced with booze. They get drunk and Dumbo starts blowing rather surprising bubbles through his trunk. Timothy asks him to blow a large bubble, which he does. That bubble assumes elephant form, turns pink, and proceeds to blow a second pink elephant from its trunk. The second blows a third, and now we see four pink elephants. Their trunks become trumpet-like, playing a fanfare which we hear on the sound-track. They merge their trunks 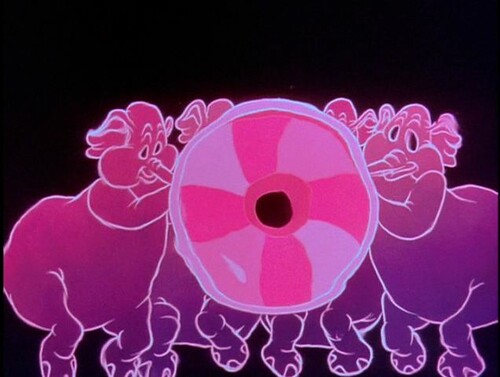 and the merged bell expands, bursts, and becomes a portal for a parade of marching elephants. 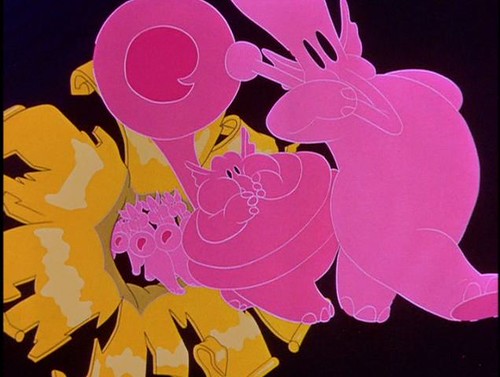 Each elephant in the parade is playing a musical instrument, which is a deformed part of its body.

There are three things to note so far. 1) The parade of elephants has now become effectively detached from Dumbo. He blew the first bubble, but it became an elephant on its own. The rest followed from that. 2) The purely instrumental music we’re hearing is, in effect, being created by the elephants themselves. 3) At various points in this opening segment we see reactions from both Dumbo and Timothy; they’re on-screen characters.

We get a series of gags emphasizing that the elephants are making the music, and then we see a parade of small elephants march around (notice Dumbo and Timothy watching them): 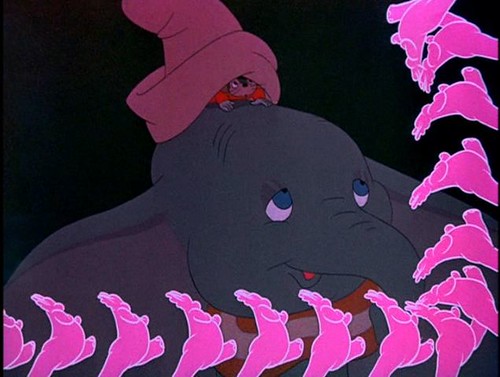 There is no structure in the film-space itself on which those elephants are marching. They’re walking on the border of the frame. This is the sort of self-conscious gag that’s as old as animation itself – such trickery was fundamental to Winsor McCay’s work, but also to Disney’s Alice shorts. Those elephants will parade around the entire perimeter of the frame and then they’ll start expanding until they burst. 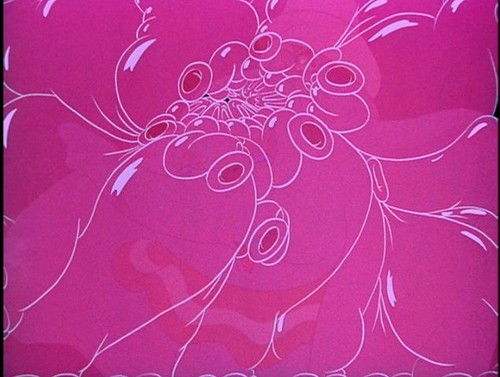 2. An Elephant State of Mind

With that we move to new phase. We no longer see Dumbo or Timothy on screen; they’re out for the rest of the sequence. The elephants are no longer depicted as being the source of the music. They’re just elephants. And the music gets a vocal that comments on the rather creepy things happening on screen.

First we get a flood of elephants: 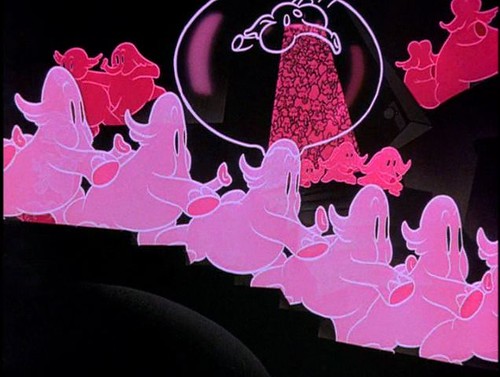 And then we see a lone elephant looking rather scared in a strange institutional bed (it’s got castors at the bottom of the bed posts). Could this be a nut house, a funny farm? 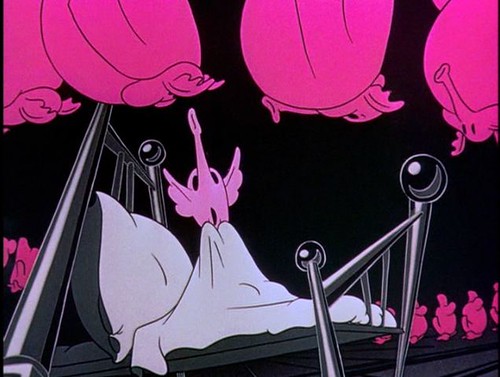 Perhaps. But also, that bedded elephant gives us a point of entry into the scene. Is that us? Could be.

The rest of this second phase consists of visual gags playing on shape and color, ending with a creepy walking creature constituted of elephant heads: 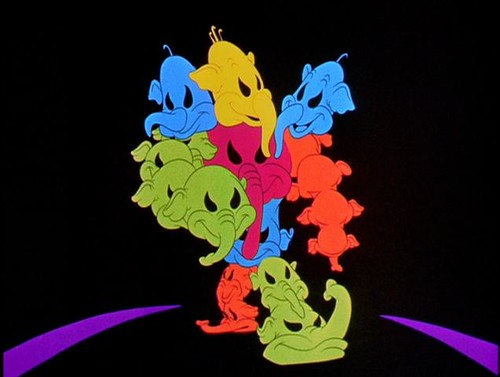 We zoom in on the yellow head, and its eyes become a pair of pyramids.

With that, we move to the next phase, which is a surreal Orientalist fantasy: 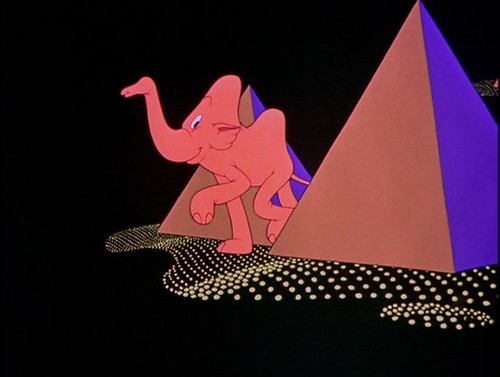 Those pyramids were the eyes of that yellow elephant head. The creature between them appears to be a cross between an elephant and a camel. So we’re moving away from elephants. And the music has changed; Disney’s dropped the “Pink Elephants” song in favor of generic slinky Oriental exotic music. Before you know it we’re looking at a swaying cobra, which is standard cartoon fare for music like this. And that cobra becomes a bizarre harem-girl elephant: 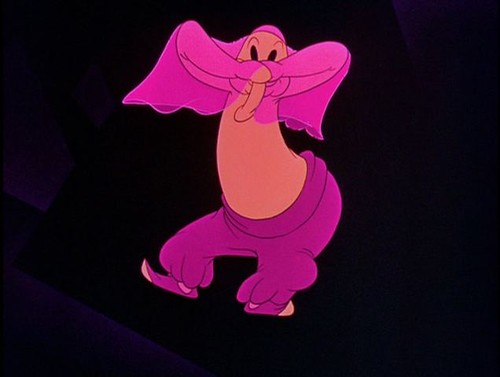 And her buttocks become a single eye, staring at us: 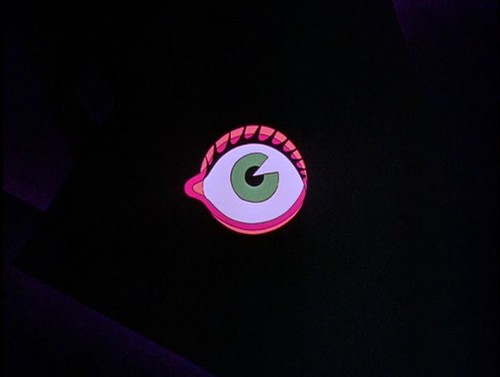 What just happened? In the opening phase of this sequence Dumbo and Timothy are on-screen observing the parade of self-generated elephants. In the next phase an elephant in the psych ward is seeing strange things; and that elephant is us. Now something up there on the screen is looking at us!

This, obviously, has got to stop. There’s another visual transition (a yellow curtain rips open) and the music changes to a fast waltz. Now we see a pair of elephants dancing: 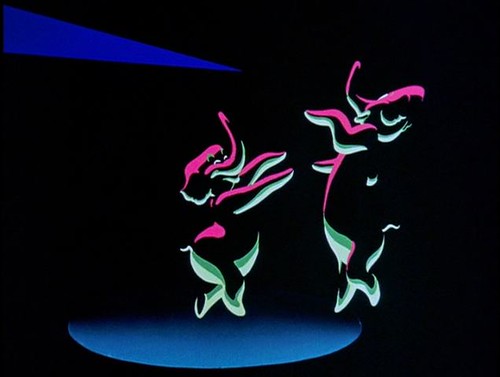 Presumably the large one is male, the small female. She poses for him: 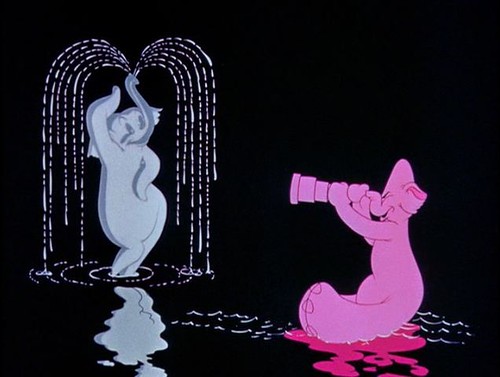 And then they ice skate and ski. These are leisure activities. All of a sudden we’re in a very different world. It’s a social world; these elephants are interacting with one another. Those two elephants, the man and the woman, are having fun together. No more funny farm follies.

Now, think of Dumbo. He’s been separated from his mother, with no sense that he’ll ever be reunited with her. His world must be rather scary. We could read the opening phases of this sequence, then, as depicting that mood. Those elephants shift shape and color. But the current phase, with leisure-time fun, that’s different — these elephants have stable shape and color, but their actions change. It’s almost as though that we’re looking ahead to what life will be like at the end of the film, when Dumbo’s had his triumph. But we’re not there yet. We’re still in pink-elephant land.

We’re got two more phases to go. The skiing gives way to a Latin sequence (don’t ask me how, just watch the movie, clip below) with up-tempo Latin music. Hot hot hot! 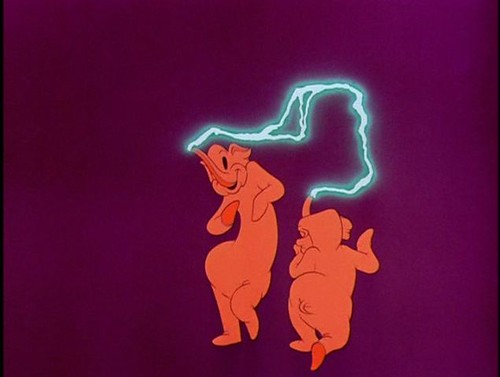 The couple becomes a group: 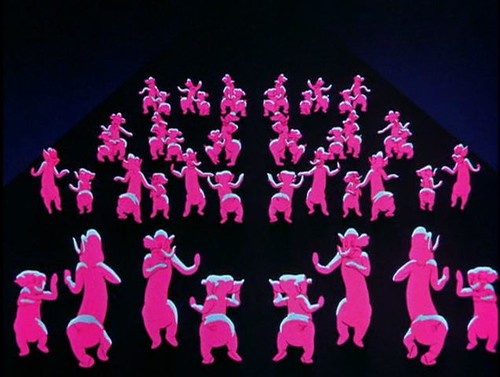 Now it’s happy time with the gang. The tempo picks up ...

... the elephants become cars, trains, planes, toboggans, all whizzing around through empty space at a faster and faster tempo. 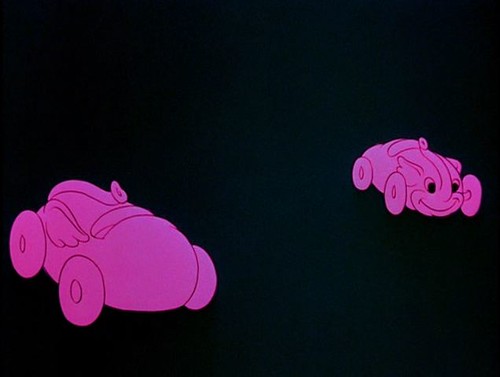 And then it all explodes: 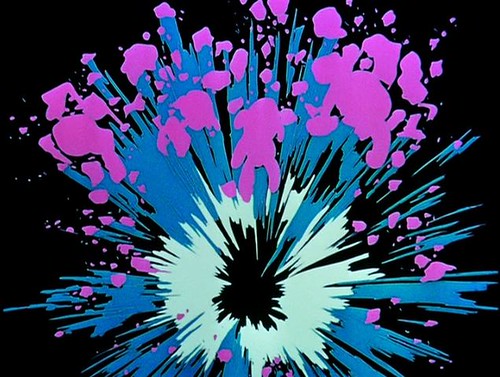 And the sequence is over. Elephants come down from above, transforming into pink clouds and dawn, and Dumbo and Timothy are up in a tree: 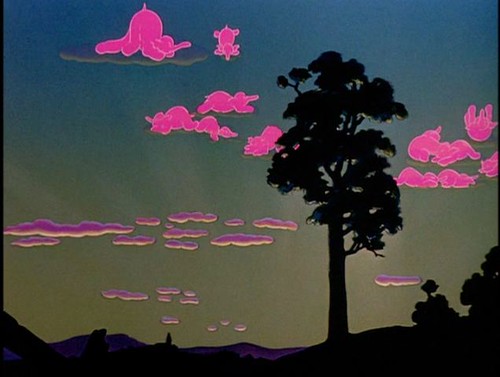 Whatever else Disney has achieved in this sequence, he’s gotten us from a state where we feel sorry for Dumbo’s really miserable plight to one where we’re relieved and perhaps even feeling a bit of hopeful expectation. We’re relieved that this strange pink elephant stuff is over. But the peppiness of that Latin music got the blood moving. Perhaps there IS something to look forward in this movie after all.

That is to say, the sequence has performed a dramatic function even if it hasn’t given as any new information about the characters and their activities. In contrast, imagine that Disney had actually tried to depict however it is that Dumbo ended up in that tree. Allow me to quote a passage from American Mythology in Disney's Dumbo, a piece I published at Michael Barrier’s site:

It seems to me that that would entail real problems. It is one thing to show this cute big-eared baby elephant getting tipsy and blowing funny bubbles and seeing things, but do you really want to depict him bumbling around and somehow managing to fly without really knowing what he was doing? While there’s no technical difficulty in doing that, it does seem to me that keeping it realistic, even within the terms of the cartoon, would require that you besmirch Dumbo’s cuteness, or come dangerously close to doing so. Further, it would rob the “learning to fly” sequence of its interest. There wouldn’t be any dramatic point to it. Finally, it would reduce the difference between Dumbo’s circus world and the crow’s world to one of mere geography. We see Dumbo stumble around in the circus, he somehow begins flapping his ears, takes to the sky, and ends up in a tall tree – all before our watchful gaze. How dull, but disillusioning.

Instead, Disney takes us into this marvelous surrealistic sequence of transmogrifying pink elephants. What that does is eradicate the circus world from out minds. And that circus world was a pretty cynical one. It’s not simply that Dumbo and his mother were ostracized, but that the circus itself was not a place of fun and fantasy, but just a gig. Whatever it is that children have in mind when daydreaming about running off to join the circus, this is not the circus they dream about. The cynicism displayed by the animals in the opening day parade, for example, was marvelous, as was the nastiness of the clowns.

So, the circus has been put behind us and we’re up a tree. With some crows. And, while these crows mocked Dumbo initially, they ended up sympathizing with him and helping him. As for those crows, they’re obviously modeled after black stereotypes, which is more than I want to get into here, though I say quite a bit about it in my post at Barrier’s. Here and now the point is simply that the world of the tree, and of the crows, is a different one from that of the circus. It’s in this world that Dumbo gets a new start in life.

Might we then read the autogenesis of those parading pink elephants as the seeds of Dumbo’s own rebirth?

Perhaps. Can’t say yet. Haven’t thought about it enough.

All I can say is that the “Pink Elephants” sequence does make some kind of sense. Give me another year and I’ll have made some progress figuring it out. Maybe.

Some raw notes on this sequence from a couple of months ago.

Electric Juice for Animals and Machines

Mother and Son, Gender and Violence in Dumbo: Some Quick Notes

Dumbo: What Happens and When