Boundaries, when humans make claims on the land 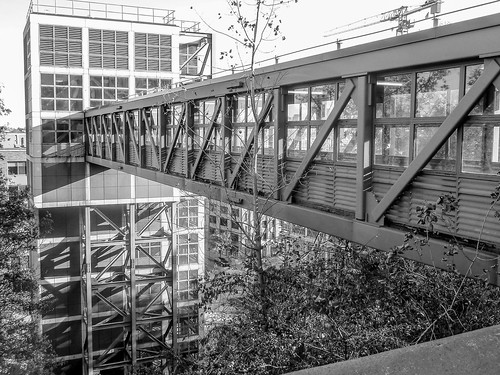 When I took this photo (just the other day) I was standing in the area of Jersey City known as The Heights. The reason for the name is obvious, that there down below, that's not high. It's low. It's also not Jersey City. It's Hoboken.

Within seconds after I snapped that shot I went through the walkway and into an elevator in that tower. When I exited the elevator I was in Hoboken. Just when did I cross the boundary between Jersey City and Hoboken. How accurately can we determine it? Perhaps more important, how accurately do we need to determine the boundary, and for what purposes?

If a crime is committed in the walkway, a mugging, or a kidnapping, who investigates, Hoboken or Jersey City? Hudson County? All three? Does it depend in just where in the walkway the crime was committed? What if the wallet was snitched on the Hoboken side, but the criminal escaped on the Jersey City side? Where's the trial held?

What kind of contracts had to be made for that structure, elevator and walkway, to be built? Who's responsible for maintenance?

Boundaries can be so tricky.