Pigs in Spirited Away

Spirited Away is the only other Miyazaki film where pigs play a role, and the film is quite different from Porco Rosso. Except for the portrayal of Marco/Porco, and the aerial parade of dead pilots, the film is in a naturalistic mode. Relatively little of Spirited Away is naturalistic. Most of the action takes place in an alternative world centered on a bathhouse for spirits; many of the workers in the bathhouse appear to be frogs. The bathhouse is run by, Yubaba, an old woman with magical powers who flies to and from the bathhouse as a bird; her henchman, Haku, is sometimes a boy, sometimes a dragon. The spirit clients have many forms, none of the human.
Chihiro is the central character. She’s a 10 year old girl whose family is moving to a new house. She doesn’t like it one bit.
The family gets lost and finds themselves at the gate to an abandoned theme park. They enter the park – her parents do so eagerly, Chihiro is reluctant – and explore it. As night falls lights begin coming on in the otherwise abandoned buildings. Wonderful aromatic food appears here and there. Her parents begin eating, though there’s no one to serve them, but Chihiro refuses to eat and continues to explore. When she returns to them, they have become pigs: 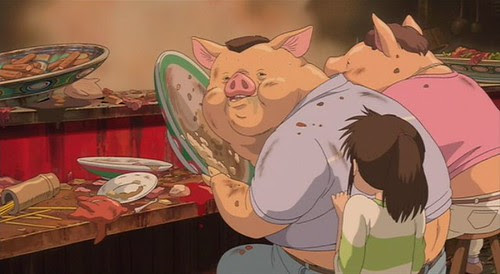 Her father’s to the left, her mother to the right. Notice that their bodies have bloated and their clothes no longer fit. If you look closely at the father’s left ‘hand’ you’ll see that it’s not a human hand; it’s a pigs foot. They are not pig-human hybrids like Porco, who has a human body and can talk. They have become pigs. They cannot talk nor do they understand Chihiro when she talks to them. They don’t even appear to recognize her.
A few seconds later we see a close-up of the father’s head: 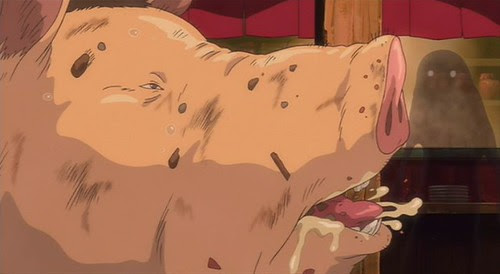 Notice the spittle in his mouth, though, given the sounds he’s making, it may be vomit. The overall effect is that this REALLY is a pig. Miyazaki never depicted Porco so grotesquely. Porco often referred to himself as a pig, and others did as well, but he was never reduced to unyielding animality in the way Chihiro’s parents have been.
Chihiro flees toward the bathhouse and is befriended by Haku, who promises to help her save her parents, and he does in fact do so. But her parents do nothing to save themselves. At this point in the film they’re out of action.

At Haku’s direction Chihiro makes her way to Komaji, the six-legged boiler man, who then directs her to Yubaba. She makes a contract for a job and, in so doing, gives up her name. When Yubaba takes the signed contract in hand she removes most of the characters in Chihiro’s name from the contract; we see them physically lift from the page and drift into Yubaba’s hand. One character remains, Sen. That’s now her name.
The next morning Haku takes her to see her parents. On the way there he tells her that if she is caught there she will be turned into a pig as well: 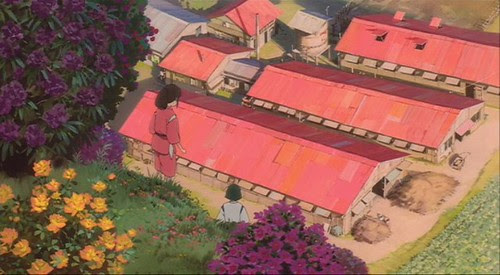 Notice the flowers on the hill; this alternative world has its beautiful aspects. Chihiro is at the top of the hill, while Haku has started down the slope. Those buildings are the pig pens. And this is what they look like inside: 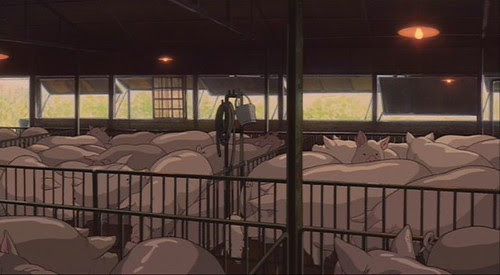 This is a working farm. There’s nothing like it in Porco Rosso. And here are Chihiro’s parents, naked pigs sleeping off their eating binge: 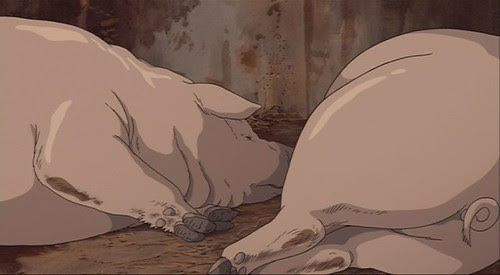 Haku tells her to look at them closely so that she is able to recognize and identify them, though he says nothing about why this is important. She tells them that she will rescue them, yells at them in fact. But they don’t hear, much less understand. They’re asleep, they’re pigs.
She goes about her chores for the day, which are arduous, dirty, and stinky. That night she dreams that she visits her parents in the pig pen. This is what she sees – pigs pigs pigs, they all look alike, a mass of undifferentiated pig flesh: 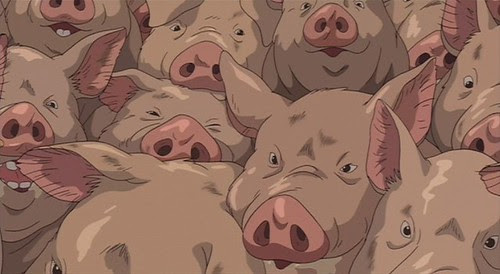 She awakens with a start, realizes it was but a dream, and sets out to work another day. In time she is ready to leave, but she must pass a test administered by Yubaba: 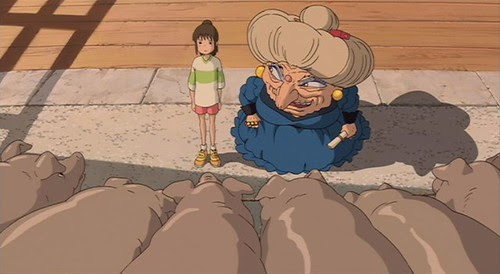 She must examine the pigs before her and identify her parents. Notice that Yubaba is holding something in her left hand. That’s Chihiro’s contract, signed as “Sen.” Chihiro examines the pigs and declares the none of them are her parents. With that declaration the contract goes up in a puff of smoke. 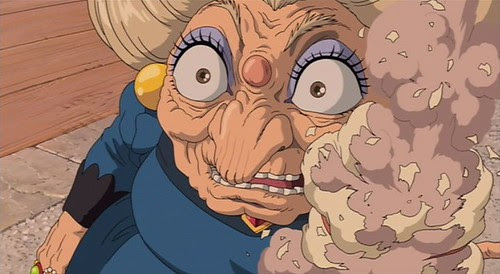 Chihiro is free to go. Before Haku tells Chihiro that she’ll meet her parents on the other side of the river, Miyazake has a surprise. Once again, he shows us the pigs: 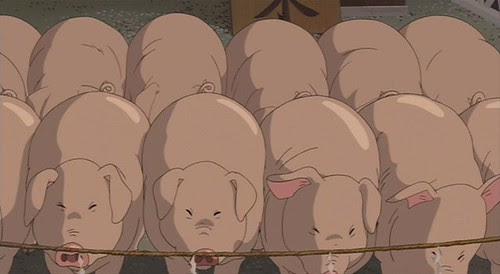 And they transform into bathhouse workers: 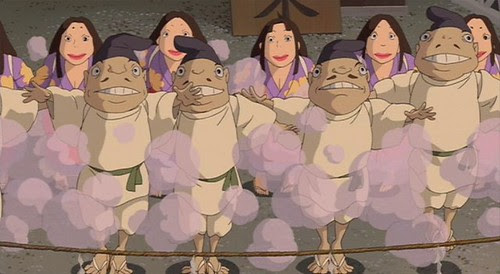 Where those pigs ever pigs at all? Were any of those pigs in the pens ever really pigs?
(Is anything what it seems?)
Who knows?
Now, what has this to do with the pig motif in Porco Rosso? As I indicated above, the films are quite different in overall character. Within those very different films Miyazaki deploys the motif in very different ways. With a few exceptions, Porco always appears as a human with a pig’s head. Chihiro’s parents are either fully human, as they are at the beginning and the end, or they are pigs. They never appear as pig-humans, except perhaps for those few moments when we see them sitting at the counter as pigs, but still wearing ill-fitting human clothing. While their status may be uppermost in Chihiro’s mind as she goes about her tasks, we see them only fleetingly. They are not at the center of the film. Chihiro is.
And yet there is a thematic similarity between the two films: identity. There is no doubt that about who the protagonist is in Porco Rosso, but the connection between Marco, in his youth before the war, and Porco, after the war, that connection is problematic. It’s the same individual, but is that individual the same KIND of creature throughout? And what kind of creature is that? That’s the issue.
In Spirited Away Chihiro’s identity as an individual is in peril. She looses her name when she signs the contract and she would have forgotten it completely without Haku’s help. He’s also the one who told her to scrutinize her pig-form parents so that she’d be able to identify them later. Yet, she identifies them, not by picking them out of the line-up, but by knowing that they’re not in the line-up. And THAT’s when her contract physically disintegrates, thereby returning Sen, the individual, to her full identity as Chihiro, the individual.
In Porco Rosso Miyazaki uses the pig motif to interrogate the nature of the protagonist. In Spirited Away he’s using it to interrogate the continuity of one individual across two realms of being, the bathhouse world and the mundane world.
ADDENDUM (5.12.10): At what point is Chihiro (irrevocably) committed to the alternative world? One can imagine that, as she and her parents walked through the gate and into the abandoned theme park, they could have turned around and walked back out at any time, almost. When did that become impossible? The obvious answer is that it became impossible when her parents started eating and thereby were transformed into pigs. In particular Chihiro knew she was stuck in there when she saw what had happened to her parents. At the point the world and life as she knew it was OVER.
Note that her body had started to dissolve and had become semi-transparent. Haku reversed that by feeding her some food from the bathhouse world. By eating THAT food, her parents committed Chihiro to the bathhouse world and severed the bond between them. Now, only by eating THAT food could Chihiro come to exist in the bathhouse world.
What Chihiro does to rescue her parents and return to mundane life, that’s complicated. But the final act, the one that allows her to return and restores her parents, that act involves pigs.