Since I've got so much Nina Paley material here I thought I'd retrieve my original 2009 review of Sita Sings the Blues from The Valve and copy it here. That way it's surrounded by more Sita stuff. 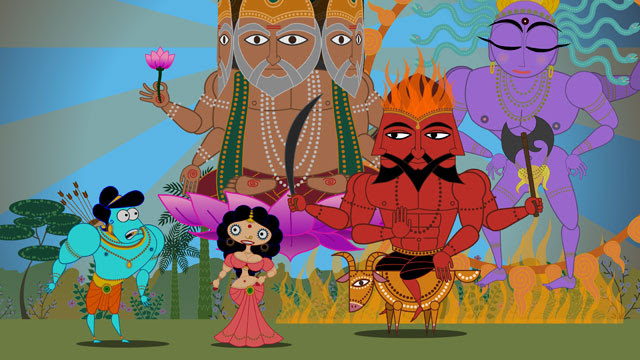 I suspect I first heard about Nina Paley’s Sita Sings the Blues in a January 2008 post at Cartoon Brew. The film had been selected to premier at the Berlin International Film Festival but Paley had to scrounge up $35,000 so she could have a 35mm print made. “Fat chance,” said I to myself. But she did it and I kept reading more about Sita here and there, watching clips, getting interested. Finally, Mike “The Curmudgeon” Barrier saw it on DVD and said “It's one of the very few animated features of the last few decades that I can recommend enthusiastically.” And he's seen Pixar, and Miyazaki!
That cinched it. I went link link z00m! on the internets, gave up a credit card number, and a couple of days later had my very own DVD (you can also stream it or download it free of charge).
Yes, it’s all that: imaginative, gorgeous, seamless, original, art.
Since the DVD contains a press kit, I’ll save myself some think-write time and simply copy the synopsis:

Sita is a Hindu goddess, the leading lady of India’s epic the Ramayana and a dutiful wife who follows her husband Rama on a 14 year exile to a forest, only to be kidnapped by an evil king from Sri Lanka. Despite remaining faithful to her husband, Sita is put through many tests. Nina (the filmmaker Nina Paley herself) is an artist who finds parallels in Sita’s life when her husband – in India on a work project – decides to break up their marriage and dump her via email. Three hilarious Indonesian shadow puppets with Indian accents – linking the popularity of the Ramayana from India all the way to the Far East - narrate both the ancient tragedy and modern comedy in this beautifully animated interpretation of the epic.
In her first feature length film, Paley juxtaposes multiple narrative and visual styles to create a highly entertaining yet moving vision of the Ramayana. Musical numbers choreographed to the 1920's jazz vocals of Annette Hanshaw feature a cast of hundreds: flying monkeys, evil monsters, gods, goddesses, warriors, sages, and winged eyeballs. A tale of truth, justice and a woman’s cry for equal treatment. Sita Sings the Blues earns its tagline as "The Greatest Break-Up Story Ever Told."

Now you know roughly what Sita’s about. And if your inner geek is thinking “ancient text + contemporary story = Ulysses,” well then your inner geek’s ahead of mine, because I didn’t think that until 10 or 20 minutes into my first viewing. But I wouldn’t count that as any more than a casual observation, one with a non-casual corollary. 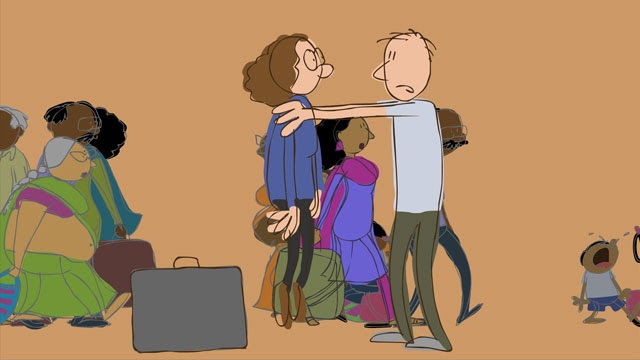 By the ordinary method of reckoning such things, the culture of ancient Greece and Rome is in the direct ancestral line of 20th Century European culture which would necessarily include Joyce's Dublin. The same mode of reckoning sees little relationship between ancient India and contemporary America, thus both Hindu nationalists and post-colonial Theorists have been criticizing Paley’s cultural miscegenation. Alas for them, cultural miscegenation has been the way of the world since whenever and it’s only accelerating in our era.
So that’s one thing.
And then there’s the mixture of narrative and visual styles the press synopsis mentions: What about that? Well, Nina’s story is presented in one visual style and more or less tells itself. Sita’s story is presented in several different styles and much of it is told, as well, by those “hilarious Indonesian shadow puppets with Indian accents” – who seem to function a bit like the chorus of Greek tragedies. Much of the emotional burden of both stories is conveyed in Annette Hanshaw’s vocals, except when it isn’t. And there are other things as well. 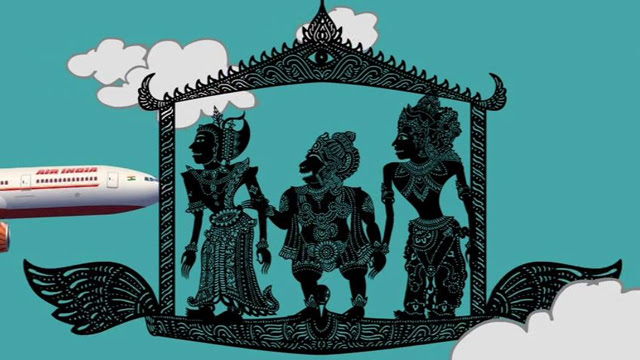 All of which is to say that you’ve got to be on your toes when you watch this film. You can’t just lay back and let it wash its magic over you. You have to work with it, you have to think about what you are seeing and hearing. And you have to experience it, not just as a narrative, but as, shall we say, an invocation, a ceremony.
Consider this frame, which occurs roughly five minutes into the film: 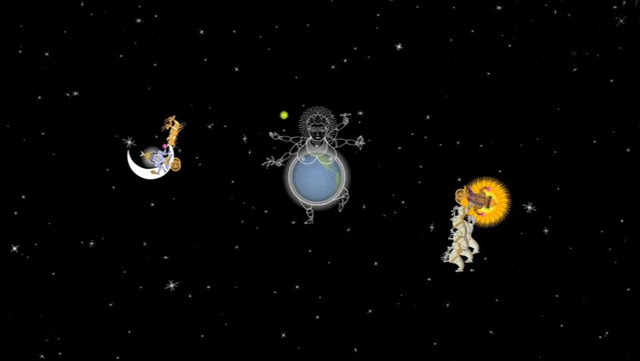 The moon-chariot is to the left, the sun-chariot to the right. They’re moving around the earth-mother in the center. This frame is preceded by a three minute sequence that presents from birth of the universe from some kind of big bang, followed by a parade of Hindu deities and then the beating heart of the universe. Now consider this frame, roughly nine minutes from the end of the film: 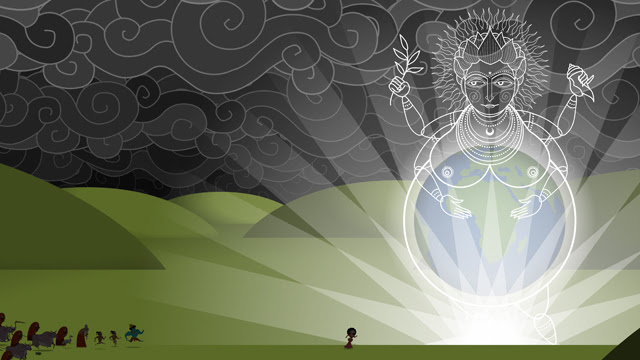 There is Mother Earth to the right. The small dark figure at the center is Sita, running to rejoin Mother Earth. Once again, she’s proving her purity, at least that’s what the story says. But if that’s the earth, then where’s Sita while she’s running? That’s obvious; she’s on the surface of the earth. See? Ceremony. Symbols. Myth. Also: that this image from the beginning of the film now returns at the end, as does the parade of deities, such repetition is the inner logic of ceremony. But the context now is different. As Sita goes running into Mother Earth, so – in a sense – the whole narrative follows her into this symbolic transformation.
Or something.
Ceremony.
About 50 minutes in the action stops for a three minute intermission – long after the first appearance of earth-mother, well before the her last appearance – in which we see our players go out for refreshments and take bathroom breaks. Here we see Agni returning with a hot dog – just what kind of meat is in that dog? 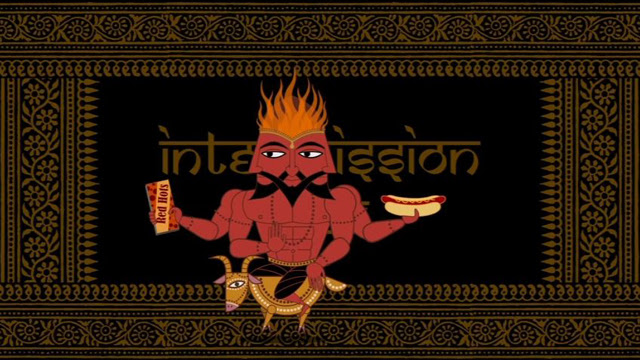 Now, if you’re thinking something like “ZOMG! self-consciousness, meta-commentary, Verfremdung, postmodernism” well of course my dear child, of course. Where’ve you been for the last hour? That train left the station during the last century.
Something else is going on. Just what, I don’t know. What I do know is that when the intermission’s over we see (cartoon) Nina sitting at her desk, getting dumped by email, and we hear Rudresh Mahanthappa’s alto sax wailing on the sound track and then, Wham! we’re into another domain. We hear Reena Shah singing and we see her dancing, like so: 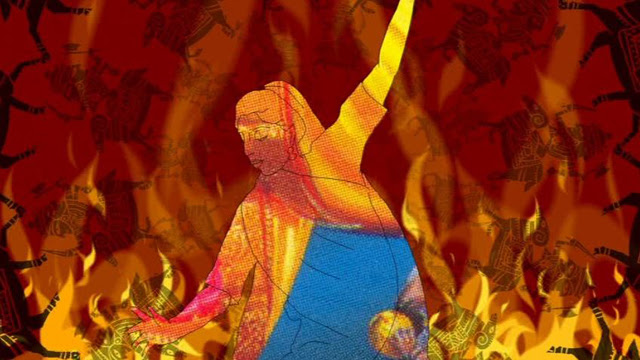 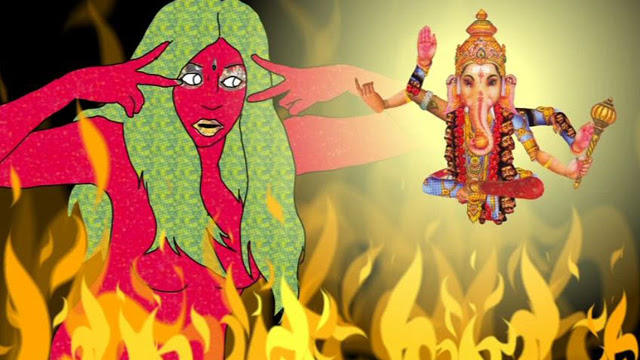 That’s her, in outline, with whatever superimposed and peeking through. I won’t pretend those frames are representative of this three minute sequence; they’re just what I decided to grab. This is the dramatic climax of the narrative, the ceremony. And it’s different from everything else you see and hear in Sita Sings the Blues.
Ceremony.
Yes, there is a story; it’s up there in the press-kit synopsis. More or less. But following that story, knowing who did what to whom, that’s the least of your responsibilities, or pleasures. Dare I say it, that cliché: It’s in the Journey. 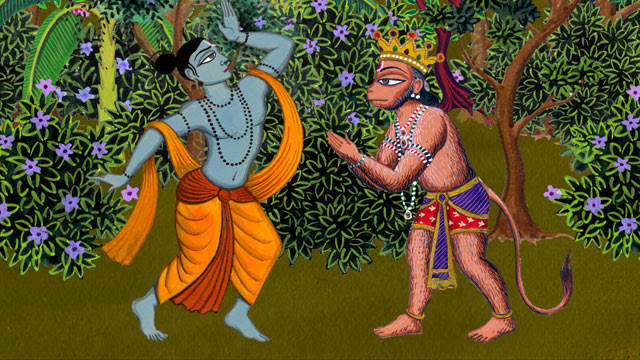 Ceremony.
ADDENDUM: Now that that's written and posted, I've been wondering whether or not Paley has, in effect, taken the many-worlds variety of Fantasia and deployed it in service of a single narrative. Looks like it to me.