Last evening I decided to take a break from pigs in Miyazaki and look at My Neighbor Totoro. Specifically, I wanted to take a close look at how Miyazaki introduced the Totoro, fantasy creatures that Miyazaki himself devised for this film. Having watched the film several times I knew that he introduced them on the sly, but I wasn’t sure of the details.
So I checked. The details astounded and delighted me. So much so that I couldn’t sit still as I stepped through the DVD from scene to scene and even frame by frame. Every few minutes I had to get up and pace the room a bit as I assimilated more evidence of Miyazaki’s consummate mastery.
The man knows how to make a film!
As you know, the story is set in rural Japan in the 1950s. The story centers on two young girls, Mei and Satsuki, and the Totoro. Along with their father, the girls have moved into a rural house that’s near the sanitarium where their mother is hospitalized. As the story opens the three of them are in a small moving truck traveling the final distance to their new home. They arrive, stop the truck, and start moving in.
About six minutes in – the film is roughly 86 minutes long – Satsuki and Mei notice a huge tree towering over the forest. Their father tells them it’s a camphor tree (that's it, at the head of the post). We’ll see this tree again; it’s a major motif in the film.
About a minute later – 6:41 – Satsuki notices an acorn on the floor in a room in the house. And another. For the next minute or so she and Mei will chase down acorns. Father suggests they’re evidence of squirrels . . . or rats (ewww).
The girls begin to investigate the rear of the house and, upon entering, detect soot sprites, which will have their attention for the next eight minutes or so, to about 16 minutes in. Soot sprites are small fuzzy balls of soot with eyes. There are lots of them, and they seem to have something to do with the acorns. The girls report back to their father, who has been joined by Granny, the old woman who’s been taking are of the house. She’s the one who identifies the little creatures as, yes, soot sprites, and tells the family a bit about them.
We now know that there’s a bit of fantasy in this world, and it's visible to children, but not adults – that’s what Granny said.
At this point we’re roughly a fifth of the way through a film named after Totoro and we haven’t seen one, nor even a hint of one. That won’t happen until roughly 29 minutes in, a bit over a third of the way through the film. But I’m getting ahead of the action.
They finish out that first day doing this and that and end up taking a bath, all three of them together – this is, after all, Japan. They laugh vigorously to drive the spirits from the house – and the last of the soot sprites scurry away. The next day they travel to the sanitarium to visit their mother (and the father his wife). On the third day, Satsuki prepares box lunches for the three of them. She heads off to school, father goes into the study, and Mei sets out to play.
By this time we’ve forgotten about the acorns and the soot sprites.
At about 28 minutes in Mei spots an old bucket with its bottom rusted out. She picks it up, looks through the hole, and what does she see? An acorn, that’s what: 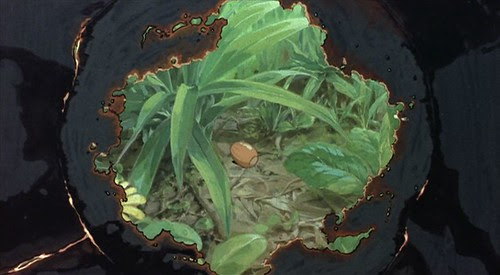 One acorn leads to another and before you know she’s got a pocket full. Then she spots a pair of ears sticking up from the grass: 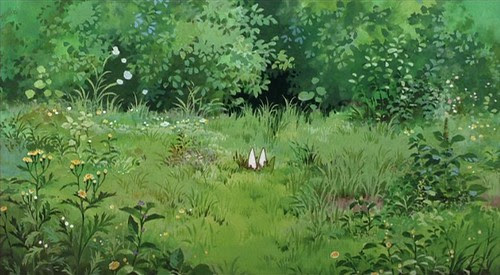 Perhaps they’re rabbit ears. But no, when she sees the whole creature, it’s not a rabbit, it’s not even fully solid. It’s translucent. It can’t be a “real” creature (this YouTube clip begins at roughly this point and continues to the end of the sequence I discuss): 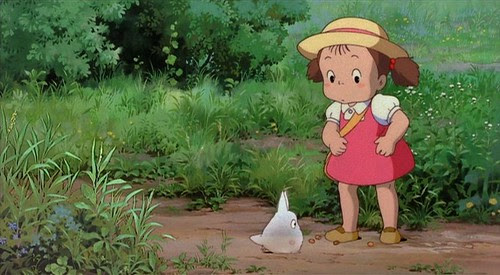 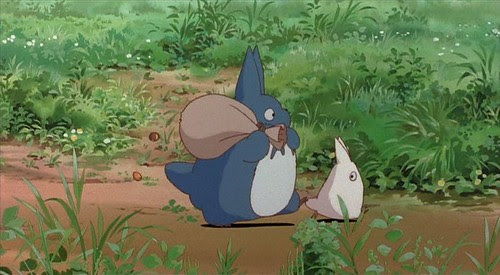 The companion is also blue and has a sack over its shoulder. One suspects the sack is full of acorns as some appear to be spilling out of the back.
Mei chases after them. They go into a tunnel through the bushes, and she follows: 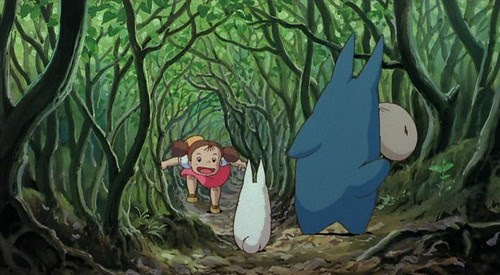 The Totoro lead Mei out of the tunnel, up and over some rocks and the roots of a large tree. And they disappear. Mei can’t see them: 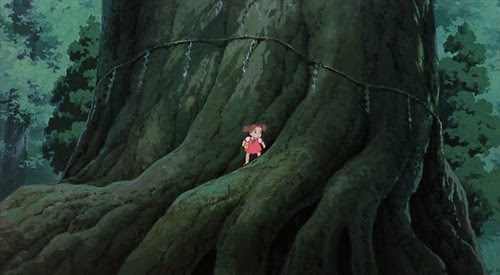 Though she may not know it, she’s standing at the base of that camphor tree we saw six minutes in. She spots a large hole among the roots. Perhaps that’s where those creatures went. Mei looks in, and what does she see? You guessed it, an acorn: 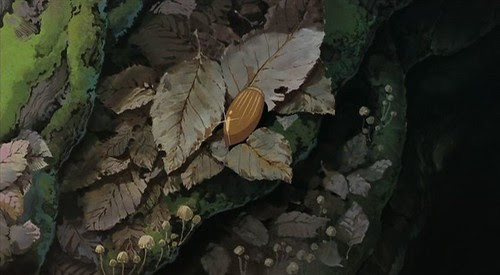 She tumbles down the hole and ends up in an enclosed space the location of which is not clear. It’s next to the tree, open to the sun, and filled with vegetation. 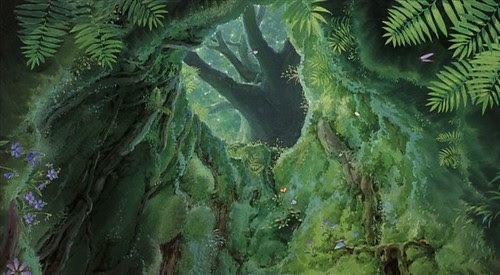 There she sees another creature. It’s huge: 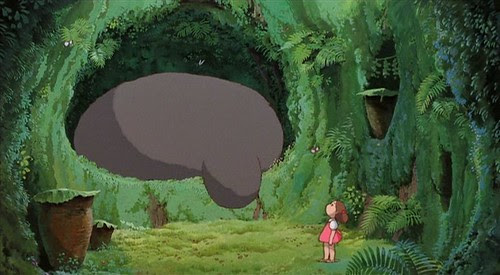 We’re now 32 minutes into the film. Mei spends the next four minutes investigating and playing with this largest of the three Totoro. She falls asleep on its belly: 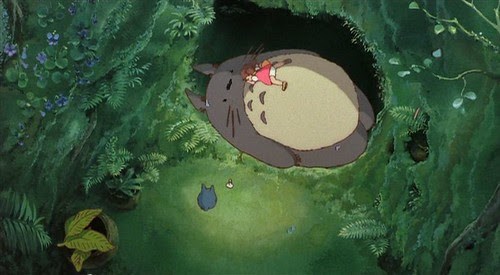 Notice the two smaller Totoro on the ground to the lower left of center.
We’re 36 minutes into the film, over a third of the way through. By the frenetic standards of, say, the Shrek franchise, nothing has happened. But what a charming and masterful nothing it is.
Consider that camphor tree. Miyazaki introduces it at six minutes in. And then moves on, to the acorn motif. Then the tree reappears roughly 24 or so minutes later, but from a completely different aspect. We’re near the base of the tree, looking at the trunk. We might not even recognize this as the base of the camphor, but we’ll go there again under circumstances where there can be no mistake about what tree this is. How did we get to that spot?
Acorns. Mei saw an acorn, followed it to the first Totoro, and followed the first to the second. She then chased them into the bushes and before we knew it WhaM! we’re at the base of the camphor. Weren’t looking for it, didn’t see it coming, but there it is.
Follow the acorns. They become the object of the children’s curiosity six minutes into the film. Acorns are natural objects. They’re seeds for trees, and food for animals. Miyazaki doesn’t tell us that, but we know it, and so do Satsuki and Mei.
The acorns lead to the soot sprites. They’re NOT natural objects, at least not in the REAL world. They’re creatures of fantasy, the first ones we see in the film. We follow them for roughly eight minutes and then go about other business. The next day we check in with mom and the day after that we go off to school. Acorns and soot sprits have been forgotten.
Until, at 28 minutes in, Mei looks through the bottom of that bucket and spots an acorn. And that acorn leads to one, two, three Totoro. We’re now deep into the fantastic heart of this film, yet it seems, and is, so natural.
From acorn, to soot sprites, to Totoro – it’s a simple progression. As Miyazaki entices us along that line, he also gets the family reestablished in their new home and pays a visit to mom. I am, frankly, astonished with Miyazaki’s grace.
And grateful for it.