Last evening I made some notes for today’s post on The Underbelly Project and, as I went to sleep, I thought my way through a draft. The general theme was Underbelly-as-socio-cultural engine. What’s the engine do, where’s it get its energy, where’s it going? – stuff like that.

I woke up this morning and THAT piece had dissolved. It’s not that I’d forgotten what I wanted to say, but that what I’d wanted to say had dissolved into more general reflections about where’s the world headed and how do we change the direction, something I’ve been thinking about a lot, for a long time.

Somewhere in there the phrase “tipping point” popped up. A cliché, yes. Could this project be a tipping point? In what? How would we know? More graffiti and street art, in more places? Perhaps that’s what’s ahead. If so, any reason to attribute an upswing to the Underbelly? Dunno. When Picasso painted women with faces like African masks, he wanted to change the imagery that gets painted, framed, and hung on walls. Is the Underbelly about imagery? Or about where the imagery goes? Both? It’s certainly about commercialization and commodification. Of street art, or art in general? Is it mostly about the forces that make Banksys worth six-figures? Does the critique extend to Damien Hirst gulling mega-rich money-magicians for mega-bucks on pickled sharks and diamond-encrusted skulls? And then there’s that Modigliani that just sold for $69,000,000. I understand that the painting is a wonder. But I don’t understand the sale price at all. That price is not just about the painting, it’s about the whole world in which that painting exists. And if THAT’s the target, well, you see how my thinking dissolves into where’s the world headed and how do we change the direction. Meanwhile, there’s the art itself, which only a few have seen and will ever see. For the rest of us it’s the photos and the ideas. Whatever those ideas are. Whatever ideas we conjure up, individually and collectively.

I know that reproductions are inadequate representations of originals. And when the originals span a wall, even worse. Scale matters. And when those originals are in a space that’s large, dark, and deserted? Whoa! How can looking at photos on the screen or, perhaps one day, between the pages of a book, how can that be anything like the experience of art looming up on you as you walk the Underbelly?

That context is HUGE. The place of encounter is central to graffiti and street art. It’s environmental art. Photos that crop out the context make the art unintelligible. 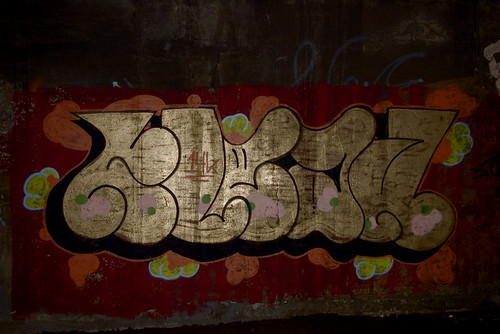 I’ve not seen the Underbelly art, likely never will. Though I’ve ridden the subway often enough, I’ve not walked the tunnels. But I have walked tunnels, and seen art in space dark enough that you don’t know what the colors are. Really.

How do you mobilize that experience against the worshipers of diamond-encrusted skulls?

Is THAT what this is about?

Mystery vs. everything else. 
All the photos were taken in tunnels in Jersey City, two rivers and an island west of The Underbelly Project.