With brains in the news these days (for example, all the hoopla about the Brain Activity Map project) I've decided to republish this old post suggesting that the brain is like a swarm of bees in your skull. 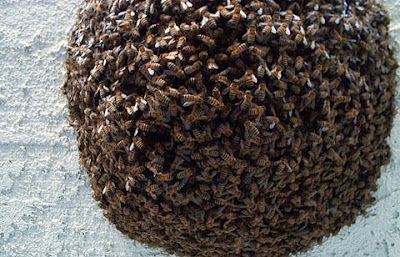 Ordering Mark Moffett’s Adventures Among Ants got me to thinking about a science fiction novel that knocked my socks off when I was 12 or 13: Man of Many Minds, by E. Everett Evans. It’s about George Hanlon, a man who had the ability to project his mind into other creatures. At a critical point in the book, when – I believe – Hanlon is about to be tortured, he projects his whole mind, every last bit of it, into a swarm of bees, thereby escaping the pain of torture.*

I thought that was pretty neat.

But what does it have to do with Moffett’s book? That’s pretty simple. Ants, like bees, live in groups, and it’s not unusual to think of such groups as being some kind of superorganism – a notion that, according to this blog entry, Moffett subjects to a critical workout. That swarm of bees in Man of Many Minds is such a superorganism.

But when it “absorbed” Hanlon’s mind, what did it become then? The question is a rhetorical one; after all, it’s about something never really happened. It’s just fiction. But a very suggestive fiction.

Could the human brain be something like a hive of bees?

There is now a pretty strong consensus that the cerebral cortex (which is, by no means, the entire brain, but it is likely that this is where culture is carried) is organized into small columns of neurons. In a 1978 essay Vernon Mountcastle called these minicolumns and suggested that they have about 100-300 neurons each. He estimated that the neocortex consists of 600,000,000 of these minicolumns. He also suggested that these minicolumns are organized into macrocolumns, about 600,000 of them -- implying that there are hundreds of minicolumns per macrocolumn. (Mountcastle was clear that these numbers were just order of magnitude estimates & that is all I need for my purposes.) That makes these macrocolumns roughly the size of a typical invertebrate nervous system of 10K to 100K neurons. So, here’s my metaphor: Your neocortex consists of 600,000 buzzing bees going about their business.


The point of the metaphor is that, just as individual bees are autonomous agents (which must, nonetheless, feed and reproduce in a group), so the macrocolumns are autonomous agents (which are physically coupled to many other such agents). Bees go about their business by sensing optical and chemical gradients and features and by moving their bodies and excreting chemicals. The macrocolumns are not directly connected to the external world, but they have extensive inputs and outputs to other macrocolumns and to other regions of the brain and nervous system. From a purely information processing point of view, they are as capable of action as are bees. They “sense” neurochemical gradients in the intersynaptic space and act on their sensations by excreting chemicals into that space.

This loose metaphor really gets interesting, however, when we begin to think about human interaction, which of course implies interaction between brains. Some interactions are pretty loose, such as those between people strolling the aisles at a supermarket. Other interactions are tighter, such as people having a conversation over a meal. And some interactions are very tight, such as musicians making music with one another. And that brings us back to insects, fireflies in particular.

Allow me to quote a passage from Chapter 3 of Beethoven’s Anvil:

Physicists do understand one element of dance, simple repetitive rhythm. This understanding has been applied to many biological systems, one of which is male fireflies in Southeast Asia. These fireflies gather in large groups on river banks, flashing on and off in unison to signal their availability to females. When they begin gathering around sunset their flashings are uncoordinated. But, as dusk darkens into night, regions of synchronized flashing emerge and spread until whole trees are cloaked in fireflies flashing in synchrony.

There is no reason to believe that this activity is directed in the way that a conductor directs an orchestra. There is no lead firefly setting the pace of the others. The flashing simply emerges; it is self-organized. Each firefly is making his own decisions about when he’ll flash, influenced by the activities of his neighbors. This activity has been analyzed as a system of coupled oscillators, a phenomenon first noticed by the seventeenth century Dutch physicist Christiaan Huygens, who invented the pendulum clock—the pendulum being a prime example of an oscillator. One day Huygens saw that the pendulums of two clocks on the same wall were swinging in perfect synchrony. He disturbed one of them so that the synchrony dissolved, but it returned within half an hour. After a bit of experimentation he concluded that the clocks were affected by the vibrations each transmitted to the wall behind them. These vibrations led them to synchronize their periods and thereby minimize their collective energy expenditure.

Any phenomenon common to systems as different as pendulum clocks and fireflies must be very general.

I then go on to develop an argument that music works like that as well. As I say in my review of Steven Mithen’s The Singing Neanderthals, “what musicking does is bring all participants into a temporal framework where the physical actions - whether dance or vocalization - of different individuals are synchronized on the same time scale as that of neural impulses, that of milliseconds. Within that shared intentional framework the group can develop and refine its culture. Everyone cooperates to create sounds and movements they hold in common.” While making music, I argue, we may consider the nervous systems of individuals as being physically coupled together so as to constitute a single dynamical system that is distributed across separate individuals. When the music-making stops, the distributed system dissolves into its individual components; individuals, that is to say, their brains, are free once again to operate independently of one another.

The point of this exercise is that, by (the reductive step of) insisting on thinking of brains as physical systems, and therefore insisting that interactions between brains is physical interaction, we can arrive at a concept of a very special human group – one engaged in music-making – as a single distributed nervous system. That is possible only because the fundamental coupling requirements are very simple, simple enough that fireflies and neurons can meet those requirements.

If fireflies can teach us about how we can make music, than surely ants have much to teach us as well. I look forward to reading Moffett’s book.


If you're at all curious about what a bee brain might actually be like, well Nature Precedings has something similar, an account of the brain of the fruit fly.

Virtual Fly Brain: An ontology-linked schema of the Drosophila Brain

Drosophila neuro-anatomical data is scattered across a large, diverse literature dating back over 75 years and a growing number of community databases. Lack of a standardized nomenclature for neuro-anatomy makes comparison and searching this growing data-set extremely arduous.

A recent standardization effort (BrainName; Manuscript in preparation) has produced a segmented, 3D model of the Drosophila brain annotated with a controlled vocabulary. We are formalizing these developments to produce a web-based ontology-linked atlas in which gross brain anatomy is defined, in part, by labeled volumes in a standard reference brain.

We have developed new relations that allow us to use this well-defined gross anatomy as a substrate to define neuronal types according to where they fasciculate and innervate as well as to record the neurotransmitters they release, their lineage and functions. The resulting ontology will provide a vocabulary for annotation and a means for integrative queries of neurobiological data.

The ontology and associated images, queries and annotations will be integrated into the Virtual Fly Brain website. This will provide a resource that biologists can use to browse annotated images of Drosophila neuro-anatomy and to get answers to questions about that anatomy and related data, without any need for ontology expertise.


Hanlon didn't struggle when they bound him firmly in the chair with manacles on hands and feet. He knew it would be useless anyway. He let his body slump into his chair, and again directed his mind through that vent. He must not let them defeat him! He had to survive—to get word—to the Corps!

Then his searching mind contacted another—a weak, primitive one, but a mind. Avidly he fastened onto it, merged with it ... and found himself inside the brain of one of those Simonidean pigeons.

Ah! This is wonderful! Pigeons seldom fly alone. Where you find one you almost always find a number. Activating the bird's brain he sent out a call to others of its kind that it had found food in abundance. Soon more and more of them flew down to where the now enslaved pigeon was standing, and as each one came, Hanlon sent into its brain all of his mind it would hold.

He summoned the birds to his aid, to no avail. One of them was shot. He had to withdraw his mind from it and then...


The other parts of his mind were flying all about the enclosed park that was a part of the great palace, searching, desperately seeking some other form of life that could be used as a housing for the dying part of Hanlon's mind.

Suddenly one of them uttered a cry that drew the rest to it on swift pinions, to see attached to one of the trees a huge swarm of Simonidean bees.

"Will the queen do?" the one mind-portion asked anxiously.

There was a convulsive shudder in all the minds, for the birds knew—and Hanlon had heard—how deadly poisonous these native bees were; how they were hunted down and exterminated when found. They were twice the size, and many, many times more vicious and deadly than Terran bees. Even now two gardeners were running toward the tree with a great metal net and flame-throwers.

But Hanlon was desperate. "She will have to do," the aggregate mind decided.

And he got the queen to relieve him of his torturers.