From Concept to First Flight: The A5M Fighter in Miyazaki’s The Wind Rises

In yesterday’s post [1] I sketched what I take to the be overall pattern of The Wind Rises: Gianni Caproni presides over Horikoshi’s imaginative life until he takes a job with Mitsubishi, then Naoko Satomi, whom he marries, takes custody of his soul, if you will, as he designs his first real plane, one that goes into production. The purpose of this post is to follow that pattern in a set of scenes during which the design of that plane unfolds. Let’s pick up the action in a dreamtime sequence where Caproni asks him whether or wants to live in a world with pyramids.

The implication, we are to suppose, is that the pyramids are magnificent structures, albeit built by imperial dynasties for the glorification of rulers [2]. Caproni chooses a world with pyramids. What about Horikoshi? “I just want to make beautiful airplanes.” 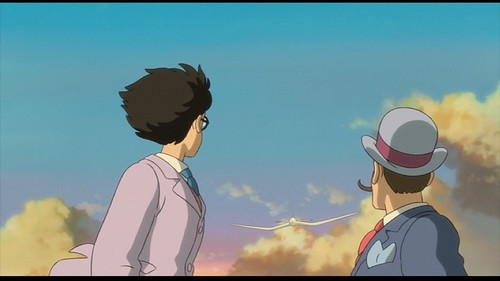 The plane flies a loop over their heads and approaches from behind.

Horikoshi: “Oh I’d have a long way to go. I don’t even have an engine or a cockpit yet. 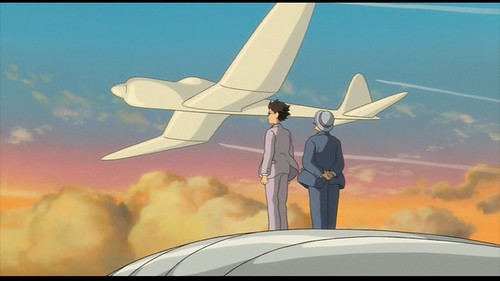 Notice that, unlike, for example, the plane on which they are standing, this flying object isn’t fully an airplane. It’s just a fuselage and airfoils. There’s no engine or propellers – it glides silently – nor any glass in the canopy above the cockpit area. It’s just a moving 3D form.

The camera then pans down from dreamtime to an aerial view of a city. We see Horikoshi at work at his drafting table. The next day he goes to work with the boss and is made chief engineer on the new project, a carrier-based fighter. The first try fails and Horikoshi is sent to a mountain resort to “chill out”, as the kids say. There he meets Noako Satomi, whom he’d helped years ago in the Kanto Earthquake. She was a girl then, but now she’s a young woman. They begin courting.


They make dinner plans, but they’re canceled because, her father informs Horikoshi, Naoko has a fever and so remains in her upper floor room. When she doesn’t show up for breakfast the next day Horikoshi returns to his room, goes out on his small balcony, and begins cutting paper. Notice the book with “aviation” in its title: 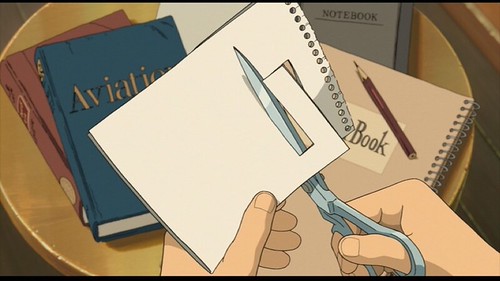 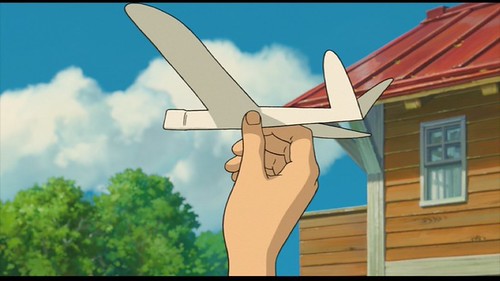 He’s creating a paper airplane and, as he does so, he utters, “Let the wind carry these wings, carry these wings to you.” He tosses the plane, this and that, and attracts her attention, after almost falling from his balcony. The plane gets picked up by a gust of wind and is propelled above her head and lands behind her on her balcony, though she doesn’t notice. 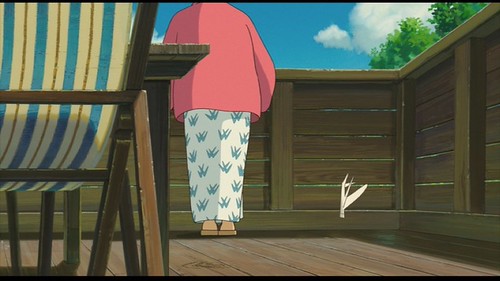 Horikoshi is gesturing, as though he’s trying to figure out the plane’s flight… 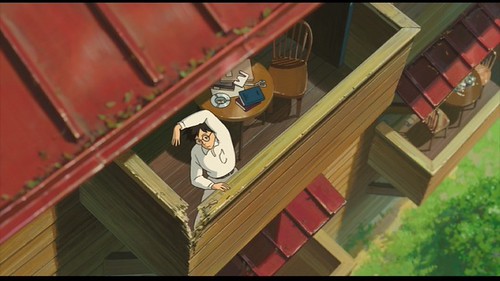 …and she figures out that it must have landed behind her. She turns around, there it is, picks it up, and gives it a toss: 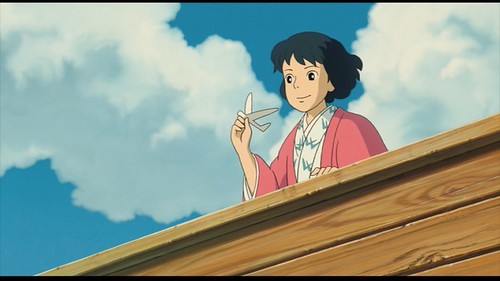 It flutters about and is captured by this fellow… 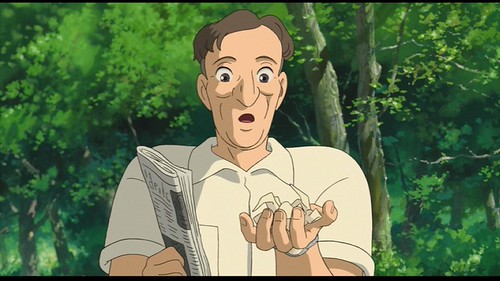 …who inadvertently crushes it. The plane is gone. He’s German, an anti-Nazi German, and his name is Castorp, after the protagonist of Thomas Mann’s The Magic Mountain, which is referenced in various ways in the film [3]. While that reference is thematically important, that’s not what we’re tracking in this post, so let’s set it aside.

Horikoshi appears with a new plane. We don’t know where he got it or how he created it. It’s just there, and it doesn’t look like that first paper plane. 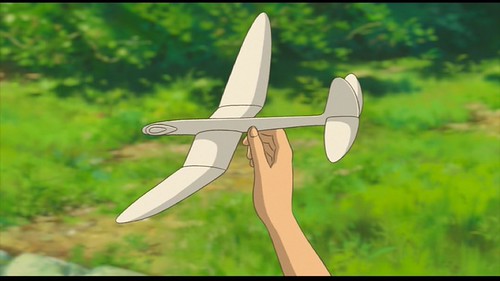 It’s much more shapely. Notice the dip in the wings, like that almost-plane that Caproni had shown him (first and second image above). 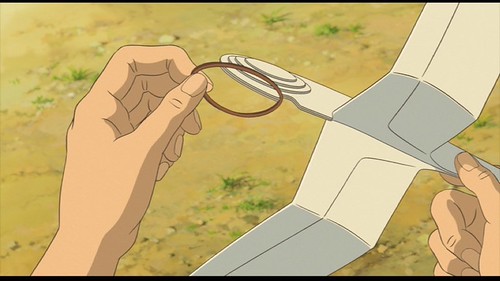 He launches it to her, and it flies much more gracefully then the other one had done. 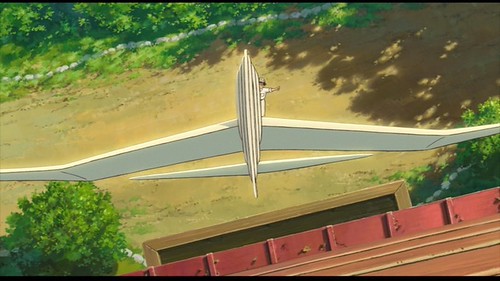 She manages to catch it… 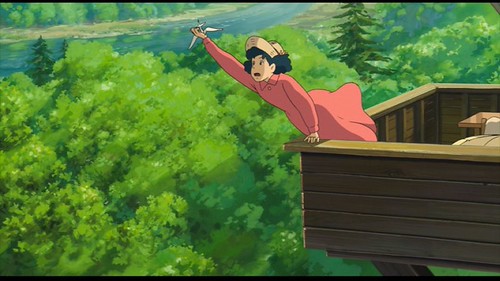 …but looses her hat: 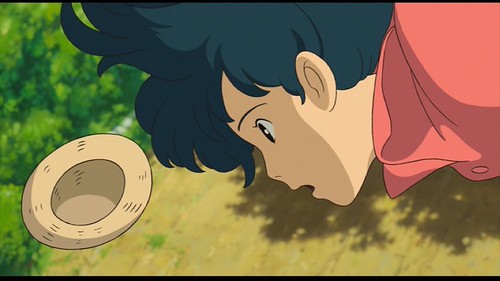 …which Horikoshi manages to catch as he crashes into some bushes: 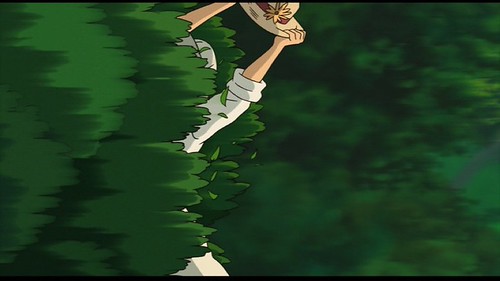 That evening over dinner with Castorp and with Naoko’s father Horikoshi declares his love for Naoko and asks her father’s approval. As he’s trying to come up with a response Naoko appears on the stairs: “Father, I would very like to have your approval too.” It’s settled, they’ll be married, but not until Naoko has recovered from her tuberculosis.

Horikoshi returns to work, this and that, secret police, this and that, Naoko hemorrhaging, this and that. At a design meeting he reveals his new design concept. Don’t ask me just what reality register this is supposed to be, but this is what we see beneath Horikoshi’s voiceover: 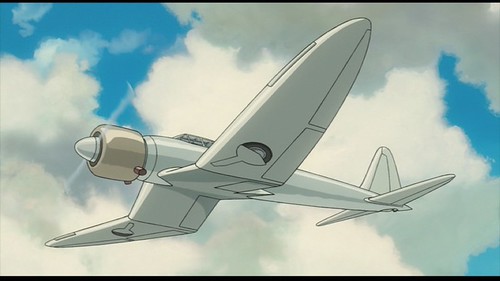 It’s not an actual plane. But it looks pretty good. It looks like that concept Caproni showed him earlier in the film (again, first and second frame grab above) and like the model Horikoshi flew and Naoko caught after his paper plane was crushed by Castorp. All three have bent wings.

That design had to be scrapped. But the re-design, and the plane that Mitsubishi eventually produced, the A5M, had that same feature (notice, e.g., the red markings on the wings and the black cowling around the motor): 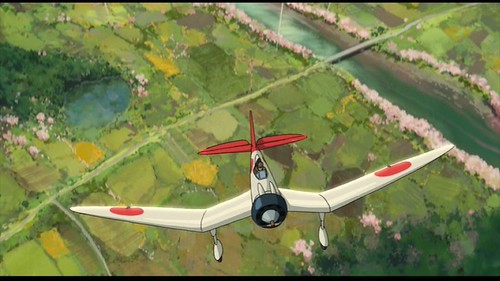 What is Miyazaki showing us in this chain of aeronautical forms, from Castorp’s vision in dreamtime, to the paper plane and then the model through which Horikoshi and Naoko conduct their courtship, to the final form of an actual production plane? It is easy to think of things to say, to begin reasoning. But a precise formulation? I think that will be somewhat more difficult.

It might even require a general statement and exploration of Miyazaki’s aesthetic, from the different registers of reality – modes of existence in Latour’s phrase – down to all that various details he shows us, whether engineering drawings, a rubber band to launch a model, or wind-blown hair. As long as we know that there is something that needs to be explicated, and that someday someone will do it, there is no need for us to do it here and now. Miyazaki’s films are not going to drop off the face of the earth when we’re not looking at them or thinking about them. They will outlast us and be waiting when someone is ready to undertake the work.

[1] The Pattern of Miyazaki’s The Wind Rises, URL: http://new-savanna.blogspot.com/2015/11/the-pattern-of-miyazakis-wind-rises.html

[2] This mention of the pyramids have figured in a number of reviews, such as “The Trouble with The Wind Rises” by Inkoo Kang in The Village Voice (December 11, 2013):

Jiro, as he’s referred to in the film, finds such beauty in airplanes and flight that he feverishly pursues the next level of killing machines for Mitsubishi, justifying his work by comparing his planes to the pyramids. The reference to the pharaohs might allude to the fact that Mitsubishi used Chinese and Korean slave labor to build Jiro’s Zero planes. But the character never considers whether the slaves who died making those pyramids might not believe the results were worth their lives.

Jiro represents the moral myopia of the imperial Japanese citizenry and of the aesthete. His shortsightedness is quite literally symbolized by his Harry Potter-esque glasses, which, paired with his lavender suits, make him look perpetually youthful and innocent.

[3] Here are a few remarks on reddit about Castorp in the film:
https://www.reddit.com/r/TrueFilm/comments/2hhdso/hans_castorp_in_the_wind_rises/