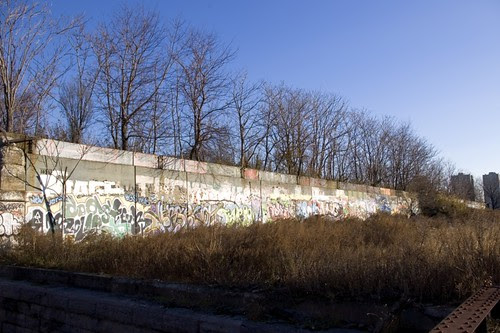 Jersey City’s Wall of Fame is about half a mile from the western end of the Holland Tunnel. It’s a block long, stretching from Coles St. to Jersey Avenue between 10th and, well 12th, since 11th no longer exists. You can’t see it from the street because it’s up on an embankment. Fifty years ago there were railroad tracks and a freight station on the embankment, but those are gone. This particular block is slated to have apartment buildings on it, but the stagnant economy as put those plans on hold.

Because the wall is hidden from the street, it is ideal for graffiti writers, who paint for one another, not for members of the general public, some of whom would surely complain to the authorities and they, in turn, would have the wall “buffed” (that is, be painted over). Also, because the walls are semi-hidden (they’re visible to people living in the upper stories of nearby apartment buildings), the writers can work without fear of interruption. 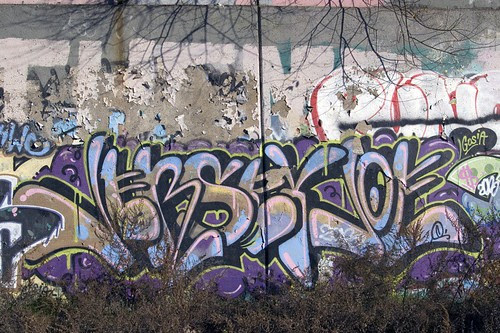 This is by Jersey Joe, who also writes as Rime and who has (or had, some have been painted over) two or three other pieces on or near the wall. He has a world-wide reputation and, in fact, makes a living as a graffiti writer. But he still does “illegals” in addition to his legit work so as to keep up his street cred. 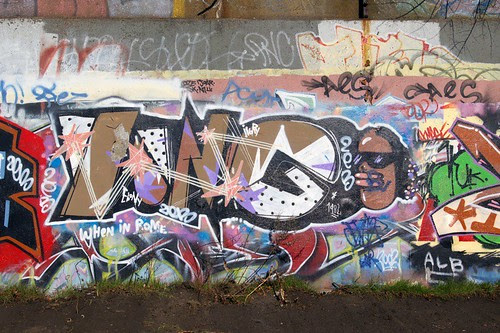 This is in a style that’s distinctly different from anything else on the wall. It’s one of several pieces by a crew from the UK – notice the “UK” to the right. Notice, as well, that fragments of older graffiti are visible around the edges of this piece. 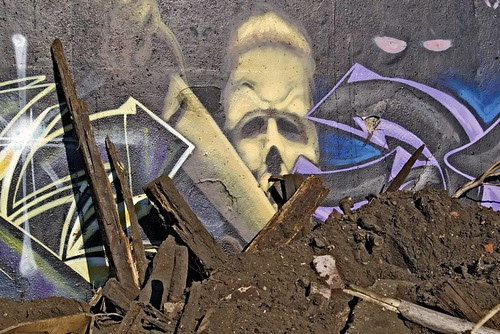 This is one of several pieces that was done on a black background. Sometimes, but not always (see the previous photo), a crew of writers will paint the surface a single color in order to completely cover-over older graffiti on the surface. Notice the dirt and junk piled in from of this piece. Site preparation work had begun for an apartment complex before the bottom dropped out of the economy. As a result a lot of perfectly fine graffiti was damaged or destroyed for no good reason. 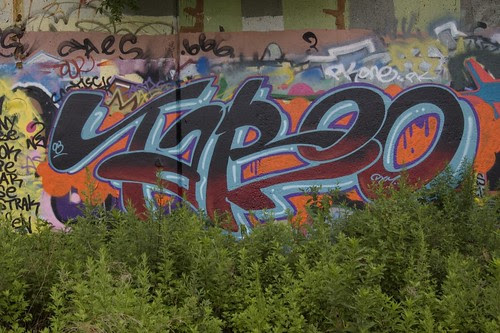 This is by Taboo, a writer with Brooklyn’s DYM crew. As far as I know this piece is still up, though it’s been well over a year since I’ve been up on the embankment.