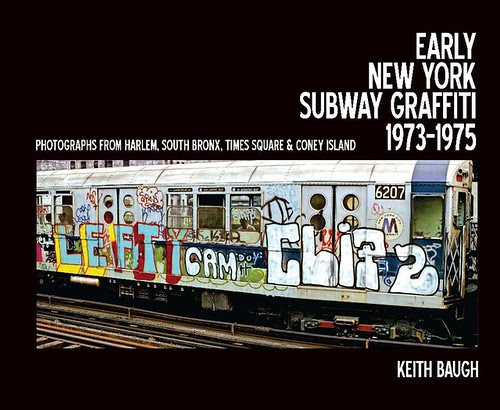 Basically, history is a mystery. When you’re living the life, you don’t know where it’s going, who’s on the same trip, but on the other side of the world, and which close buddy’s gonna’ get off the train around the next turn. And when you’re looking back at the past, sorta’ knowing how at least some things turned out – well, the historical record isn’t what you’d want it to be. There’s big blank stretches.
That’s how it is with graffiti. Back in the day, who knew it’d make the global circuit & end up on sneakers and sk8boards and hi-fashion scarves and hiphop videos and Japanese anime and all that? Who knew? How could they? Writers were too busy getting up and out-running the police. Everyone else was worried about the vandals.
And now, we look back: Where’d it all come from? Yeah, Philly, New York. But what did it actually look like, day to day, week to week, month to month?
So, along comes this guy from England, Keith Baugh. He’s an artist and photographer. One day he’s looking through his stuff, some old photos from back in the day. Drags them out, shows them around to some folks.
Holy Crap! Keith. You know what you got?
No, tell me.
The missing link, that’s what.
The missing link?
The missing link.

Back in 73 and 75 Keith Baugh visited NYC to snap photos as visual reference for some paintings. He didn’t know anything about graffiti when he landed at JFK in 73. But when he saw those painted trains, he knew something was happening there. What it was, wasn’t exactly clear. But he had to photograph it.
He’s now published the best of those photos in Early New York Subway Graffiti 1973-1975. It’s a stunning collection. And it helps fill in the gap between John Naar’s 1973 photos in The Faith of Graffiti and The Birth of Graffiti and the early 1980s photos by Martha Cooper and Henry Chalfant in Subway Art. My rough impression is that graffiti changed more between 73 and 75 than it did between 75 and 84 (when Subway Art was published). Roughly, between 73 and 75 we get a marvelous proliferation of forms, motifs, and techniques, but it’s all wild and woolly, rough and ready. The next decade was about refinement and consolidation and differentiation of styles within the larger boundaries of graffiti style.
Of course, comparing the photos in these three bodies of work, Naar, Baugh and Cooper/Chalfant, is tricky. For one thing, Naar snapped graffiti wherever he could see it and not just on the outside of subway cars. Baugh and Cooper/Chalfant concentrated on those cars. Still, keeping that in mind, here’s my quick and dirty take on what happened.
From 73 (Naar) to 75 (Baugh) we move definitively beyond the tag. The beginnings of pieces (aka masterpieces) were there in Naar’s photos, but piecing is emerging in all its glory in Baugh’s. Not only pieces, but balloon letter throw-ups. I didn’t see any in Naar’s photos, but Baugh snapped lots of them, including an amazing run of JT’s going back-to-back the length of a car, window-down. Naar’s photos caught the beginning of fill-and-outline letters, which are blooming and blossoming in Baugh’s photos, and 3D has emerged. There’s a stronger sense of composition, of filling an area rather than just writing a name. Writers have begun to explore the whole car as their canvas. In general, there’s a richer repertoire of design motifs and characters.
And wild style has emerged. Inside the first page we see a car with window-down pieces by King and Tracy. They’re connected by a caption: "Wild Style." With that, we’re off to the races.
But what was Vamm doing, putting his name over a Nautilus-class nuclear submarine? Talk about bombing.
When we compare these mid-70s pieces to those in Subway Art the basic impression is one of more refined composition in the 80s work. In particular, more attention is given to the background and hence, to a dialog between foreground and background. Clouds are used more effectively. There’s more consistency in letter design and better can control, especially on the large strokes. Curves and long lines are smoother and fills are more even. 3D perpendiculars are more carefully executed. And of course, there’s more wild style piecing.
Graffiti had come of age. And yet Cooper and Chalfant still had to scramble to get their book published. People still didn’t know.
If I’d been on the street in NYC in 84 would I have known or guessed? Probably not. What about you?