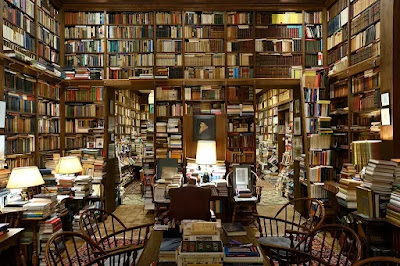 Dick Macksey’s library made the NYTimes today. Macksey died in July of 2019, but his library, or rather a simulacrum of it, lives on. That particular photo appeared on the web some time before Macksey’s death, two, three, I don’t know, maybe four years before. I don’t know when I first saw it, but I recognized it immediately. That library is legendary in the circle of Macksey’s colleagues, students and former students, and who knows who else. We’ve all seen it and marveled.

I took my first course of Dick Macksey in the Spring of 1966. It was on the autobiographical novel and when we read Tristram Shandy, he brought in a first edition for the class to see, nine small (quarto-sized) volumes. I likely visited his house that semester with the class. I remember seeing the three volumes of The Principia Mathematica on a chair in the entryway. But he’d not yet converted the garage into a library – that was a year later. After that I visited the library many times, sometimes with a class, sometimes after one of the films shown on Wednesday and Friday evenings in Levering Hall. Macksey would host discussions of the films, and further viewings – he had a screen and a 16mm projector in the library. The library seemed full at the time, but not nearly so full as it is in that photo.

If one looks, one can easily find photos of libraries on the web, public and institutional libraries, but home libraries as well. Many of them are magnificent, grander and more luxurious that Dick’s. They show well. But don’t look used.

Dick’s library was used, of course by Dick himself, but by others as well. That’s how the library looks, well used. And that despite the fact that there are no people in it. It appears inhabited, alive. It’s those lights and their relationship to the books and shelves. That photo reveals the library as the living embodiment of the inquiring mind.

I wonder how long it will keep spinning through the web?