Under the Bergen Arches

Jersey City was a bustling port in the early 20th Century. To facilitate rail access to the waterfront a mile-long trench was cut into the southern end of the Jersey Palisades through the heart of Jersey City. It was called the Erie Cut and was between, say, 50 and 80 feet deep and 70 to 100 feet wide at the bottom. In three places the cut became short tunnels so that roads and buildings could go atop it; short bridges were built at two points. Collectively these are the Bergen Arches, the name by which this feature is known today.
Four railroad tracks were laid in it. They went to the Hudson river just yards south of the Holland Tunnel. Then, in the third quarter of the century, container ships were introduced and the freight facilities shifted to Elizabeth, NJ. Jersey City's docks were useless, and so were the railroad lines that fed them. So, three of the four tracks were ripped out of the Erie Cut and the eastern end was filled with dirt and rock.
The cut is all but abandoned. People throw trash over the edge, homeless people build huts under the arches, and graffiti writers paint on the walls. It is a strange urban paradise. When you're down there you feel profoundly isolated from the city, more so than, for example, when you are in New York City's Central Park. There's trash everywhere, but much of it is obscured by lush greenery. The western end of the cut is water-logged; I've never been down there when I wasn't walking though an inch or two of water & mud, except for the winter, when it's iced over.
And the graffiti, the graffiti tells of strange tribes and ancient civilizations. Except that they're not strange. They're my neighbors, some of them at least. 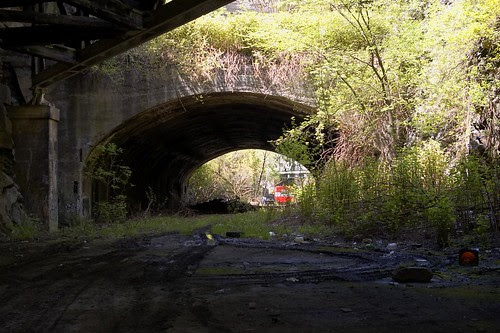 Above: Looking through the last arch at the western end of the Erie Cut. You can see some of the graffiti in this post, this one, and at my Flickr site.