Children in Search of the Dance

I first published this two years ago, but it's worth thinking about again.

Last Thursday evening I went to a concert by the Gordys, a local group in Hoboken, New Jersey, that performs an eclectic mixture of folk, rock, and klezmer music. The performance is an annual event and this was, I believe, the 11th or 12th such concert. The concert was held at 7 in the evening in Frank Sinatra Park, which is located on the Hudson River in full view of Manhattan.

I’d been to a Gordy’s concert two years ago (see photos here) and knew how it would go. In particular, I knew that there’d be lots of families with children and that, near the end of the concert, when they went into klezmer mode, there would be dancing. That’s what interested me this time, the dancing; I wanted to see what the kids did.

It turned out that the most interesting kid action occurred before the klezmer, when the adults got up and danced in circles and the kids managed to fit-in however. Of course, I didn’t realize that until after I got home and started looking through my pictures. Fortunately I did manage to snap enough photos to illustrate what captured my interest.

So, first I’ll say just a little more about the Gordys, then I present a run of photos with descriptive comments, and last I’ll do a bit of thinking.

As I’ve indicated, the Gordys perform and, for the most part, live in Hoboken. They are friends in real life and, consequently, the audience for their concerts tends to be friends, friends of friends, and friends of friends of friends, plus, I assume, a straggler here and there who’s attracted to the music. Here’s a photo I took two years ago that shows more or less the whole group as it existed then (there’ve been one or two personnel changes since then): 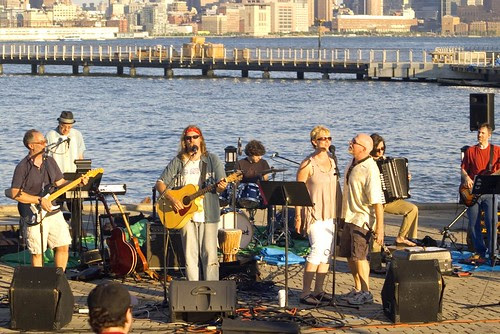 The point, then, is simple: These people know one another outside of the performance situation. They know members of the audience, and members of the audience know one another. These concerts happen in a social circle that exists within the larger community of Hoboken, NJ, and here, there, and beyond. These people are not strangers. They’re friends, a village within the city.

The concert took place in Frank Sinatra Park, which faces the Hudson River. The park is designed as a low amphitheatre with the performance area at the edge of the river. There’s four or five levels of seating in a semi-circle around the performance area and, as structured for this performance, thirty feet or so between the stage area and the first level of seating. This in-between is where the circle dancing takes place in the last third or so of the concert.


The Little Girl in Pink

Not just pink, but red and white as well, attractively layered. Here’s the first photo of her: 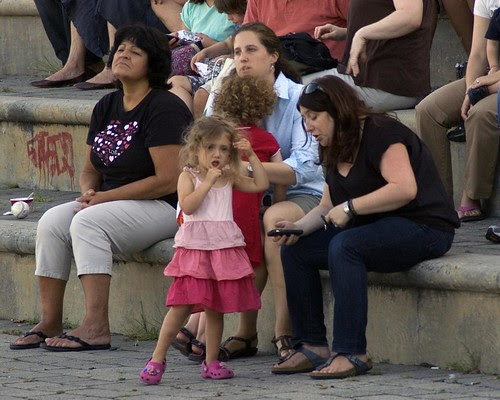 When I took that photo it was just a photo. I had no intention of following her movements; it just happened that she showed up in a number of photos that I took over the next ten minutes or so.

By way of orientation, I was sitting at the North end of the amphitheatre. In that photo the little girl was close to the South end. Thus I was shooting across the performance space. The band is to the left (that is, to the East) and between me and the girl.

A half minute later (26 seconds to be more precise) I have another photo of her: 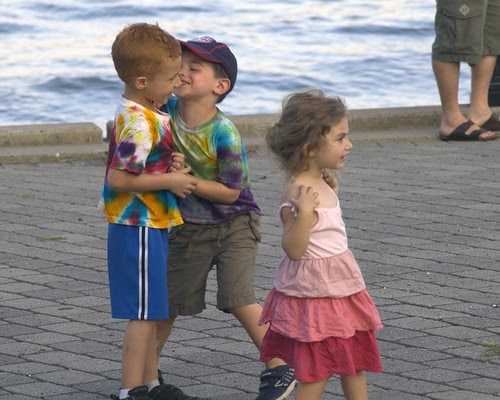 She’s now near the North end—the band is to the right of the photo—and she’s headed back South. She moves. All the kids in these photos move. Throughout the first two-thirds of the concert a dozen to twenty+ kids or so were flitting about between the band and the seated audience. They did so in ones, twos, threes and fours in shifting combinations. I have little to no idea who-knows-whom-and-how-well in these groupings.

But I’m guessing that the two boys in that photo are brothers. Notice that both are wearing tie-dyed t-shirts. At various times one would try to engage the other in couple dancing in the familiar ballroom lead-follow configuration. He’d manage for a step or three, and that would be that. I kept trying to get a good shot of them doing a step, but never really managed to do so. A fragment of such a dance attempt is, I believe, what we’re looking at in that photo. And I’m guessing that, when I snapped that shot, I was after them rather than the girl.

But the girl’s what I got. Here she is again, 11 seconds later, crossing in front of the band, headed South: 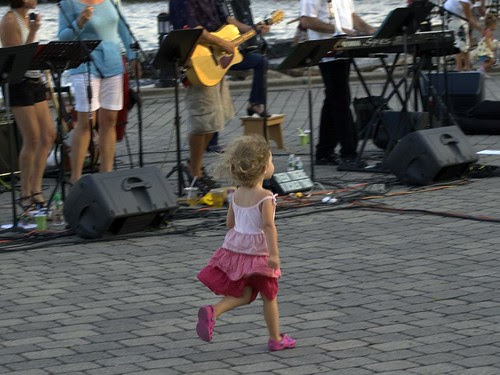 Judging from her straight up-and-down posture her gait was closer to a walk than a run.

Now, back to the boys less than a minute later: 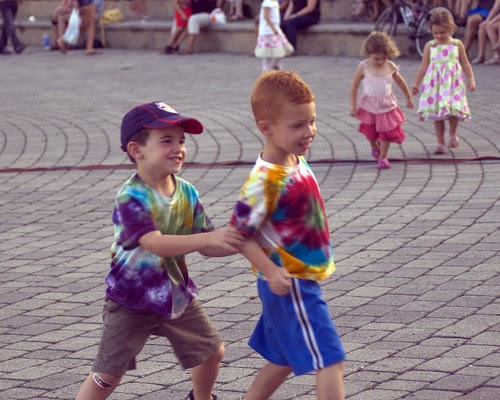 Notice our little girl in the background headed back North, with a companion. The two pairs meet a few seconds later: 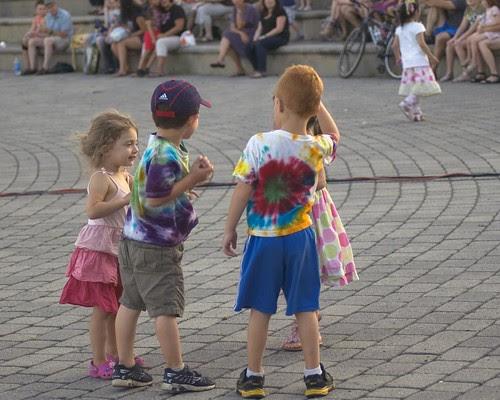 And then depart after two or so minutes. 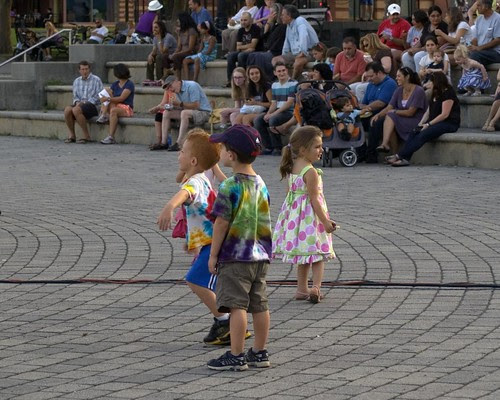 That’s a long time and, alas, I have no idea of what they did in between. Come to think of it, yes I do. If they’d gotten together and started dancing I’d have photographed it. I didn’t so I infer that they didn’t. They must have chatted.

Now another pair enters the scene, though I’m still focused on one of the boys and one of the girls from the previous two pictures while the other two are in the background right of center. Look at the upper left: 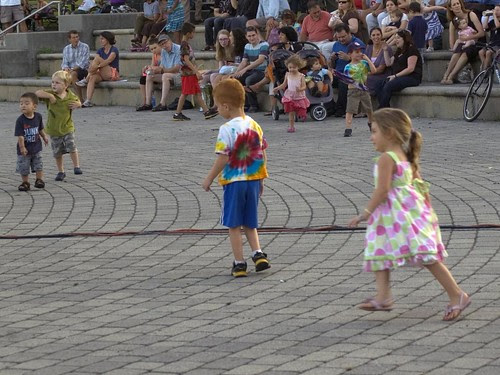 Look at the arms of the guy in the green t-shirt. He’s moving them to the music.

Now he seems to have stopped and is oriented toward his companion; perhaps they’re talking: Meanwhile, look at the foreground. The other little girl is running while looking at one of the boys and the girl in pink is stepping back in our direction. Less than ten seconds later the two girls are engaged in conversation: 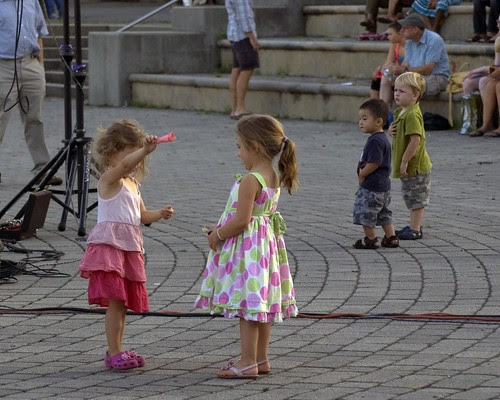 Here’s the last we’ll see of the girl in pink, but there’s three more shots of the second pair of boys. Again, look at the boy in the green shirt. He’s moving. 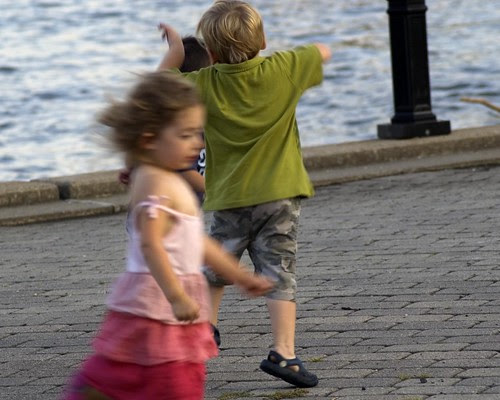 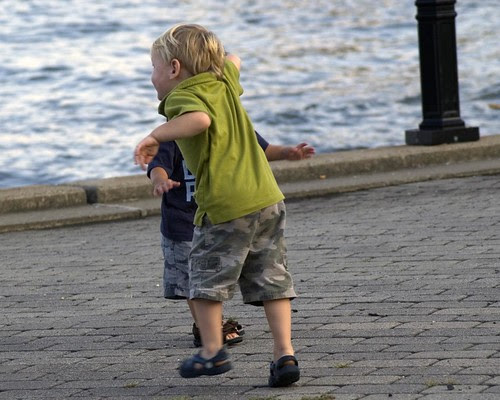 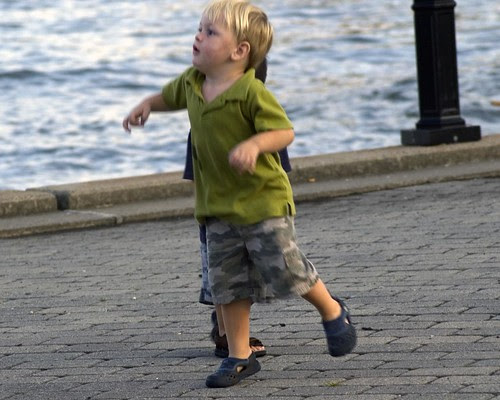 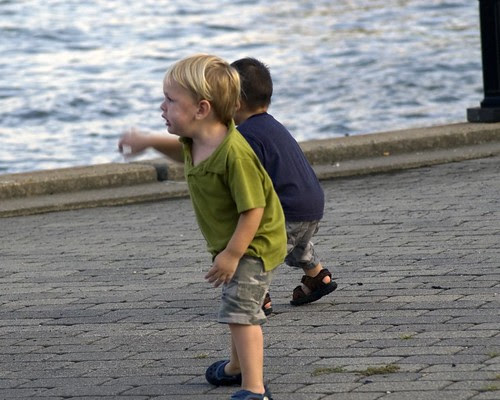 That last photo is interesting on two counts: 1) the other boy, partially obscured, now appears to be moving/dancing, and 2) judging from his facial expression, green-shirt boy appears to be in some distress. Either that, or he’s just working hard, at something. Trying to dance?

So, in the space of nine minutes (7:03:38 to 7:12:50) we’ve followed three pairs of children moving, grouping and dispersing, across half the space available between the band and the seated audience. These weren’t the only ones, obviously. Similar things were going on in other areas.

These kids moved around, mostly walking and running, but with some dancing and dance steps here and there. There was one boy, a bit older than these, who was deliberately and consistently dancing, and playing to the audience (I noticed one man with a camera-phone photographing him, perhaps his father). There must have been twenty or so kids acting like this for well over a half hour. There was never any sustained dancing, but there seemed to be moves in that direction.

That inability is as much social as it is physical, if not more so. Some of them obviously know some dance steps and they’ve all seen others dance. Learning a few steps and routines isn’t hard. A couple of weeks of daily dancing in daycare would take care of that.

And it would probably take care of the social problem as well. That is, the kids would know that, yes, dancing is something we can do, and do it together. It’s easy, like this. The social form is as important as the physical moves—which is why, I suspect, that social dancing is, or has been, part of the curriculum in finishing schools for the sons and daughters of the well-off.

So, the kids want to dance but can’t quite figure out how. But also, notice their ages. These are kindergarten and pre-K age, maybe just a little older. And all of the kids running and quasi-dancing in the plaza were that age. No 3rd and 4th graders, no middle school, no teens. And of course, no adults, not until the klezmer. Just the very young.

We’ve got very young kids who want to dance to the music, but don’t know quite how to get hooked into. And we’ve got adults and young adults, some of whom at least have some dance skills and are willing to use them in the appropriate circumstances. And we’ve got this gulf in between.

How do we: 1) provide the very young kids with the physical and social skills so that they’re comfortable dancing, and 2) keep the dancing going through childhood, teenhood, and into adulthood? Providing the physical skills is easy. What’s not so easy is providing the social skills and the cultural contexts in which to use these social and physical skills in the most civilizing and groovological art of the dance. Actually, the problem isn’t so much that these are skills are any more difficult than the physical skills. Rather, the problem is that our culture doesn’t value them highly enough to provide the opportunities and contexts. That must change.