I liked this shot as soon as it came from the camera. Others have liked to as well. It's simple and direct, nothing flash, no self-aware composition: 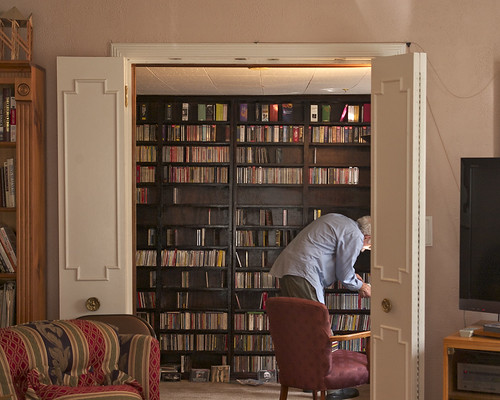 We're inside a house in a room and looking through double-doors into another room. That other room is dominated by large shelves, which are only partially filled. There's a man standing in that room, bent over, in front of the shelves. In fact, he's arranging CDs on the shelves. I know that because, obviously, I was there. But you don't need to know that. All you need to know is that he's obviously doing something and it has to do with those shelves and the objects on them. He's in dialog with them, if you will. Notice the light on his face, there to the right at the edge of the doorway. And notice the light on the ceiling of that other room. It's coming from the right.

At the lower left we can see a couch in the near room. The fabric has a fairly elaborate pattern, dominated by red. And that red leads the eye to a chair in the far room, the inner sanctum, if you will. That chair has its back to us. It's not for us. It's for the man in the room. Though he's not physically at the center of the picture, he's to the right, the picture nonetheless centers around him. And he's not at all aware of us, absorbed as he is in whatever he's doing. We're overlooking his dialog with the shelves. Intimate and yet remote.