The Green Villain is Ready

The green villain is a mood, a sensibility, an ethos, to use the ancient Greek term. And a distinctly urban ethos at that.

But it’s also a place, and as a place it is properly capitalized: Green Villain. It’s in a small factory building one that, like 1000s of such buildings across America is no longer used as a factory. Many of those buildings are no longer used at all; they’re abandoned and have fallen into disrepair.

This building is not at all abandoned. It has a number of different tenants operating various kinds of businesses. The Green Villain is one of them. It has 5000 square feet and it operates an ethos. That’s its business: mood, sensibility, attitude.

In a word: CULTURE. 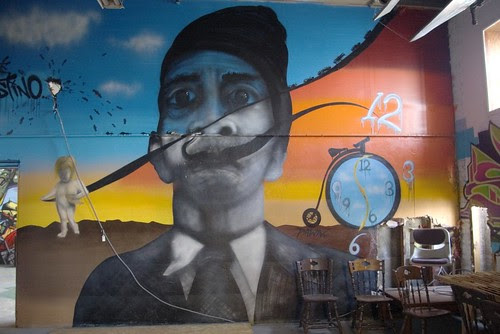 That’s Salvador Dali in the middle; and that’s his mustache under his nose, reaching out to 12, for whatever reason. The chairs and table at the right belong to the space, not to the art. But they were there and so got into the flick. I don’t know what that cord’s doing or where it goes at the upper left. But next to it on the wall you see “stino,” which is the last five letters of “Destino,” which, in turn, is the name of a film that Dali and Disney were working on, but never completed. Such is the way of the world.


I hear, though, that Disney’s released the existing fragments of Destino. Such too is the way of the world. But I figure there’s zero chance that today’s DisneyCorp would get anywhere near a contemporary Dali, nor would it even recognize one if it bit DisneyCo in the ass. And that is the way of the world as well. 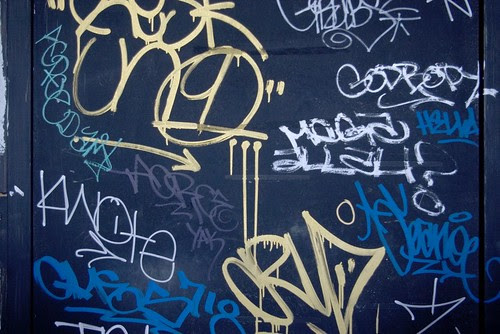 That’s a door or a wall somewhere inside the space. Perhaps I could have framed the shot better, got all of that yellow tag in the shot instead of cutting it off at the top. I’m sure I could have framed it worse. But, truth to tell, I didn’t frame it at all. I just pointed the camera and clicked.

I love this random graff. Almost more than the fully deliberate stuff. It just builds up, name upon name upon tag upon lines. But it’s never really random. It’s not planned, that’s for sure. The writers who do it, though, are quick, sharp, intuitive. The new marks are always in reference to the old, whether they’re in-between or over, they’re always in reference. And so the cumulative micro-order always hangs together. 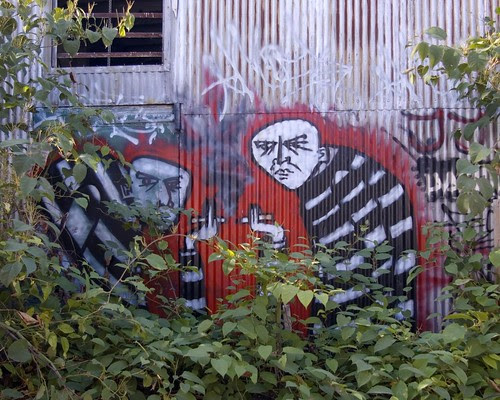 As you can see, this is outdoors. It’s in the alleyway behind the building, behind Green Villain. The alley is lined with graffiti, but I didn’t flick it all, though I did get more than this one shot.

You can see more of it HERE.

I’m told the kids who did this had never done graffiti before. The Green Villain gave them two hours worth of lessons—yes, GV is a teacher, ‘cause that’s the only way the culture will continue—and this is what they did.

The Green Villain is nothing if not transnational.

Check out his videos; see the graffiti in action.