Tales Told on a Wall, A Year in the Life

As Louis Armstrong would say, this is one of them old-time good ones. It's from The Valve, December 20, 2007. So it's not THAT old. But we're talking graffiti years, and almost five years in graffiti time, that's old. This is about one wall, and the changes it went through in a bit over a year from late October of 2006 through the end of December 2008. Since then a lot has happened on those walls, but this is enough to make the point about how graffiti changes.

Some walls stay the same; some change, frequently. The walls I’m talking about are in Jersey City, NJ, the graffiti-covered walls I’ve been photographing for over a year. Though there are norms about going over another writer’s work, they’re only one factor in the changes I’ve observed. It is not my intention, however, to offer any comprehensive analysis of these changes. My purpose is more limited: to present some of the changes, on one wall, over the past year or so.

Even with that restriction, my story is incomplete – indeed, that restriction forces incompleteness. For this wall is only one node in a network of walls, a network that is quite dense in the immediate vicinity of this wall – say 100 yards south, 300 yards north, and 50 yards on either side (but mostly to the East), a bit less dense in a mile radius around this wall, but with several areas densely packed with graffiti walls. Beyond that, for all practical purposes, the network is world-wide. It's not only that the stories on this wall are linked to stories on adjacent walls, but that the writers who’ve worked on this wall have worked on some of those other walls, and they know writers who’ve worked on still more, and so forth.

More compactly, there’s a five month period – December 2006 through April 2007 – where I didn’t take any photographs of this wall, so I don’t know what happened in that interval. More consequentially, I haven’t interviewed any of the writers, so I don’t have their versions of what happened and why. All I know is what I see and what I can conjecture on that basis.

Perhaps that is best, at least for my limited purposes here. What interests me is simply that things change on the wall. Day gives way to night gives way to day, etc. Sunny gives way to cloudy gives way to rain, and then back to sunny. Summer, Fall, Winter, Spring. Things change. The wall is part of that. 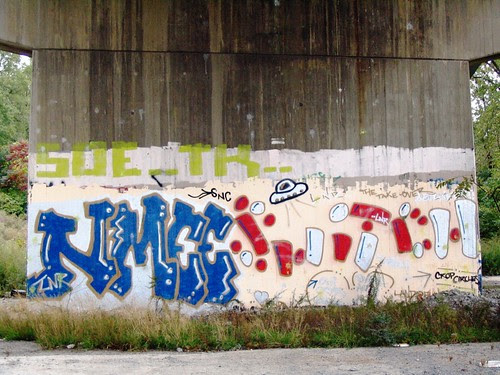 The wall is on the South side of a stanchion supporting the 14th Street Viaduct, which conveys West-bound traffic from the Holland Tunnel to the New Jersey Thruway. If you look at the right side of the wall you can see that it already has at least three layers of work on it. The top layer is over the cream background, which is in turn over a grey background, and it is over a white background. At the left we see the letters “SUE___TR__.” I conjecture that that’s the name of a graffiti crew.


The wall has two pieces (from “masterpiece”) on it. The one on the left says “NMEE” – enemy. I can’t read the name on the right, but suspect that the red and silver (yes, up close you can see it’s silver paint) dots and lines constitute a name, for that’s the convention, that a piece is a name. Note the flying saucer at the top center and the words “crop circles” at the lower right. Within, say, fifty yards of this wall there is a pillar with alien beings painted on each of the four sides, though two sides are pretty thoroughly obliterated.

I took this flick on 12 November: 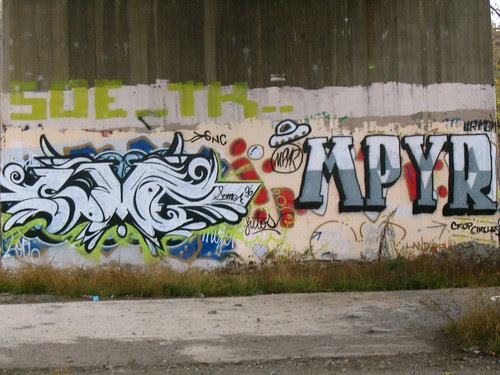 We’ve got two new pieces on the wall, though the writers did not obliterate the older work by painting a new background with rollers. The piece on the left is by SOMER; the “M” is easy to decipher, the rest is more difficult. Though it’s not clear in this photo, Somer wrote his tag at the right-middle of his piece. Obviously enough the right-hand piece is by MPYR.

Now, things begin to get interesting. This is from 21 November:

The pieces that were there less than two weeks ago are gone. If you examine the wall carefully, especially the left wide, you’ll see that there must be at least one layer between what’s now visible and what was there on the 12th. Look below SUE__TR__. There’s brown, red, yellow, green, and black that were not there on the 12th, but they’re not the current top layer either.

The large sketchy area to the left, outlined in white, is a throw-up by Somer (notice the scowls in among the letters), which I recognize from a half-dozen other walls within a quarter mile radius (here, for example) – and from seeing a video on YouTube in which Somer does a fr8 car. If you look at the center you can see “FUCK YOU TOY!!!” painted over the last letter of Somer’s throwie. A toy is an unskilled writer who doesn’t know the rules; it’s a term of disdain. I don’t know whether that was a message from Somer (to the writer who went over him) or to Somer (from the writer he went over). Whoever it is, isn’t happy. We’ve got a shoot-out at graffiti gulch.

Though it may be difficult to see here, the piece to the right is crudely done. The outline (in red) is shaky, indicating poor can control. I’m guessing, however, that the piece reads MPYR (look at the tag below the point where the shadow cuts into the piece), which is what was there on the 12th. The list of names at the left of this piece is a roll call, all the writers in the crew. 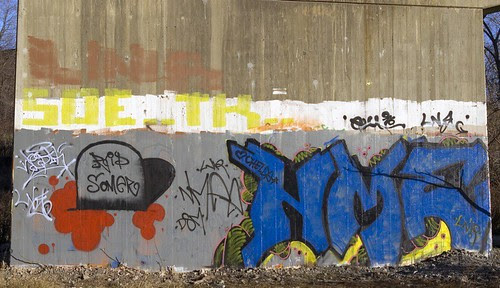 Notice, first of all, that all the old stuff has been rollered out with a medium grey. The tombstone says “RIP SOMER.” The piece to the right says NME, aka NMEE; notice the NMEE tag immediately to the left of the piece. There’s a small heart at the upper left extension of the “N” and it followed by a name, probably the writer’s girlfriend. If you look very carefully at the previous photo you’ll see the same name in yellow just below SUE. Though it’s difficult to see, below that someone’s scrawled “FUCKED HER.” Whatever’s been going on here, it’s been very nasty.

I didn’t take any more photographs here until the end of April 2007, so I don’t know whether this was the end of the Somer war or whether it continued into the New Year. But it does seem to have been over by the time I got back there again. I took this next photograph on 29 April 2007: 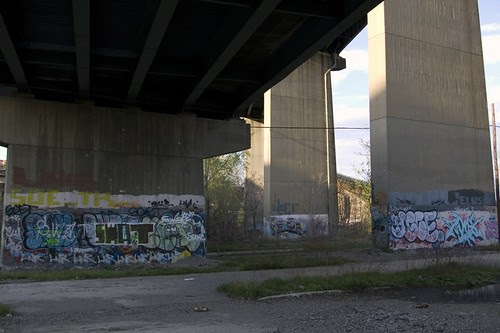 We’ve been following the wall at the left (though the Somer war covered the wall to the far right as well). Somer’s tombstone is gone. At this point its just a messy palimpsest with a crude SWAT the most intelligible thing up there, that and the repeated “LNR” (a crew) along the bottom.

By 5 July something more interesting has appeared on the wall: 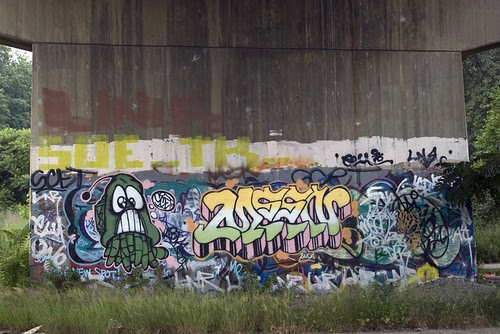 The wall still hasn’t been rollered, so previous layers are visible. But we’ve now got a green creature to the left; these are known generically as characters. Characters might be familiar cartoon characters, they might be realistically rendered people, they might be space aliens, or anything else. The elegant lettering in the center – in nicely shaded yellow, white, and green – spells out MEEN.

The wall's been pretty stable since then. As of 6 September there was an addition at the right, a green throw-up: 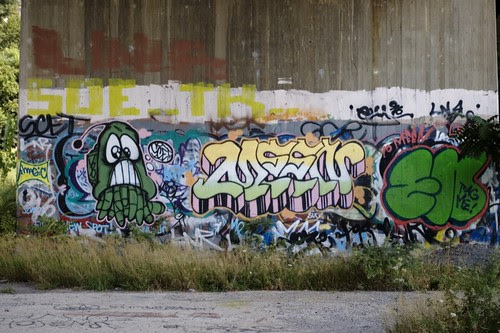 If you look at the lower right of that throwie you’ll see a taunt, “Tag me!” The taunt is addressed to Meen. While you can see the address (in pink above the throwie at the left) in this flick, it’s more prominent in the next, where the taunt is answered: 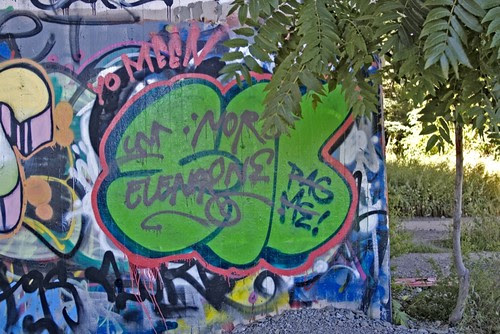 I took that photo on 24 September. That’s the last real action on that wall, at least as of a few days ago. But it’s not the end of this story.

It snowed on Sunday 1 December, the first snow of the year. And, since it might also have been the last of the season, I just had to get some flicks of graffiti and snow. So I got out my camera and walked back there. Visible tracks in the snow indicated I wasn’t the first one. There were other indications as well: 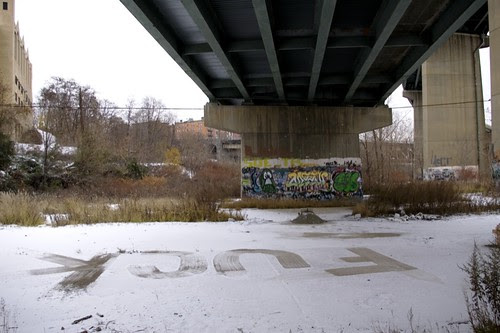 Our wall is in the background. “FUCK” – written in the snow – is in the foreground. In between the two you can see a small mound of some kind. That’s new. 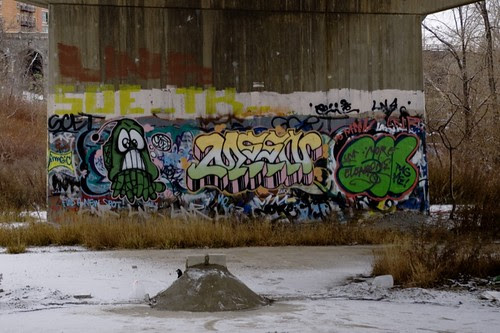 It is clearly some deliberately constructed thing. This is what it looked like from the other side: 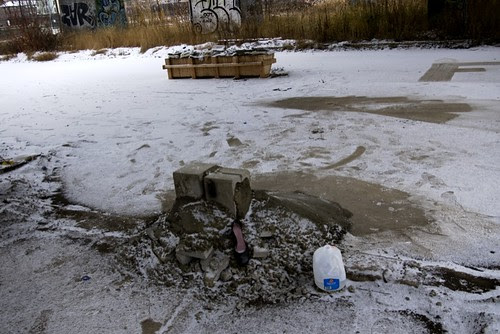 This side is rough, whereas the other side was smooth. We’ve got two cinder blocks in the middle and a pink-lined lady’s shoe in front. The gallon jug contains water. In the background we see something that, on closer inspection, looks like a mould used to form concrete. The little mound is, in fact, a partially completed concrete structure.

Noting that Jersey City has a significant and inventive artistic community I concluded that some artist had been at work on some kind of conceptual-environmental piece when the snow came along and messed things up. Hence the “FUCK.”

17 October 2012: Since then I've reached a different though by no means incompatible conclusion. This wasn't a piece of environmental art. It was an obstacle for skate-boarding. Why do I believe that? 1) I've seen skaters back there. 2) A couple months earlier a nearby guerilla skate park had been demolished.

When I came back a week later (9 December) I saw this where that wooden mould had been (you can see the mould itself in the background): 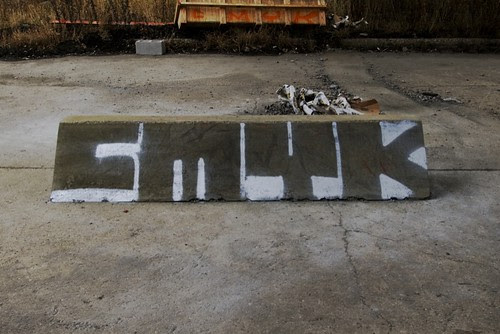 It is possible that those letters are some writer’s name, or a crew's name. I suspect that they stand for “cyan, magenta, yellow, key,” the colors of ink used in four-color printing (where the key color is generally black). Many writers are familiar with printing technology, some work in the graphic arts biz, and so they would be familiar with the CMYK color system.

Here’s a photograph of that mould, now empty (but with the trace of cement on the inside): 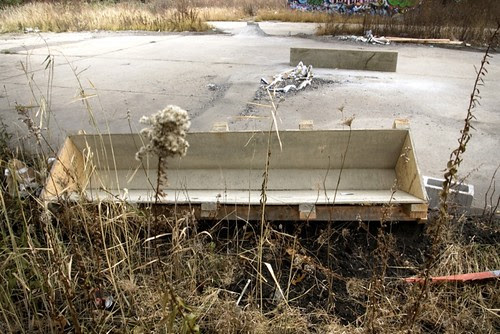 And here’s a photograph of CMYK as of 19 December: 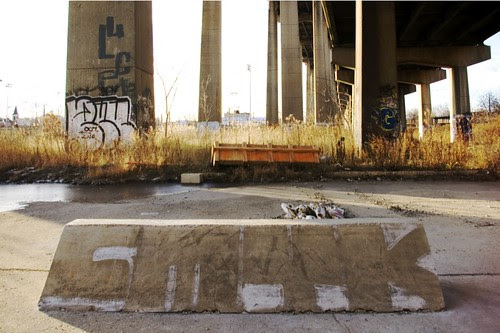 I’ll leave the final comment to the writer who decorated the little mound: 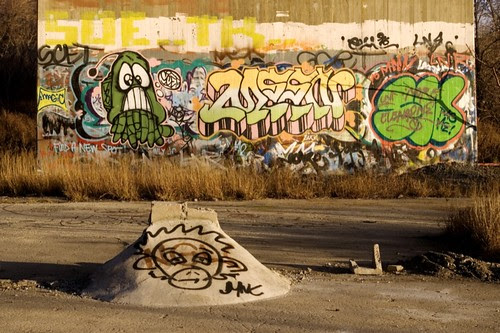 Some changes (photos taken on 21 Dec):

The monkey's been filled out a bit: 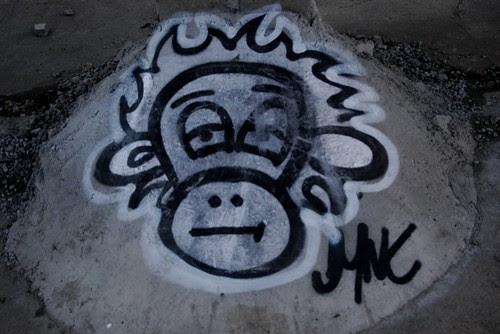 Now look at the right side of the wall: 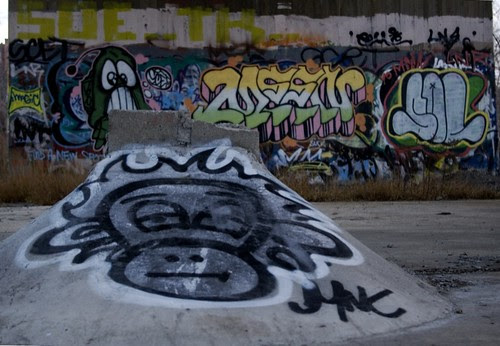 That white throw-up is new. It says "SOL." Sol's been all over the place back there, going over everyone. One of my informants tells me people are getting angry.

Another photo, another mystery. This CMYK is from a quarter mile away: 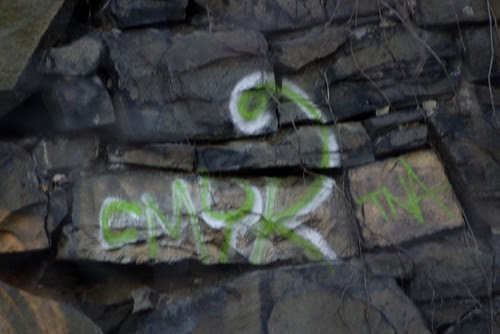 More arrivals to the site (28 December): 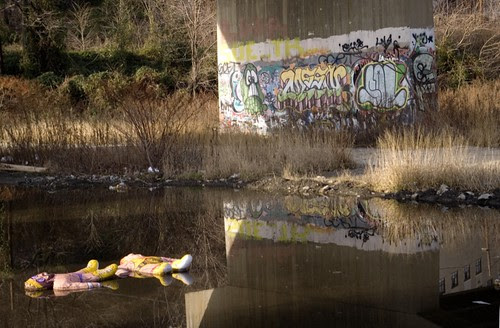 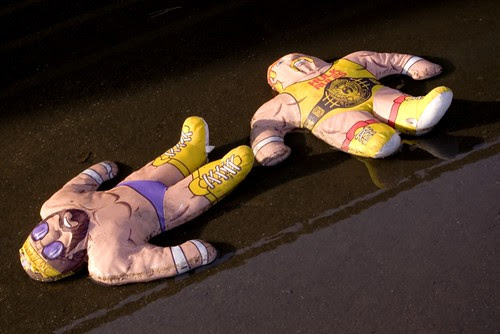 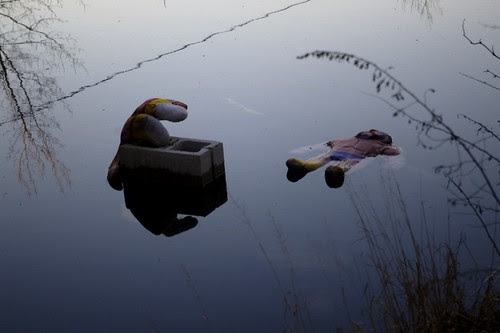 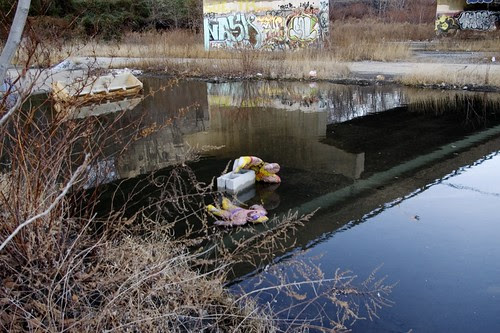