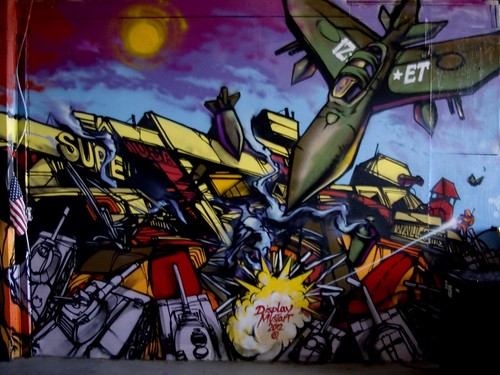 In a previous post I argued that the War Boys of George Miller’s Mad Max: Fury Road would be among the first to be recruited to the build-the-future-crusade that ends Brad bird’s Tomorrowland. That effort, of course, is to dig humankind out of the hole it’s been sinking into over the past century or so, to imagine, craft, and build a new world. I want to explore that notion a bit by arguing that graffiti writers are a ‘bridge’ between the sensibilities of these two films.

Why do I think George Miller’s War Boys would be interested in Brad Bird’s crusade for the future? Fundamentally, it’s the exuberant energy common to the two. Of course, the War Boys are (seem to be) driven by a desire for glory after death (in Valhalla) and that seems rather different from Casey Newton’s desire to keep NASA living true to its visionary mission. One rushes to death while the other seeks the stars. But are those aspirations so very different?

We are dealing with fictions, not with life. And, of the two films, Fury Road seems more consistent with the laws of physics, biology, and even history (if history can be said to have laws) than does Tomorrowland. As George Miller said in an interview:

It’s not a fantasy film. It doesn’t have dragons and spaceships. It’s a film very rooted to Earth. A kind of crazy demented quality to everyone’s behavior arises out of this extreme, elemental, post­apocalyptic world.

The plot of Tomorrowland depends on the existence of a mysterious other ‘dimension’ where a Tomorrowland has in fact been constructed. Without that other dimension, what happens to the story? What we actually see in the film itself is, of course, a mad dash to stave off an apocalypse that is, in fact, emanating from this other dimension. The chase is somewhat more elaborate than that in Fury Road, and not so action-intense, but it’s still a chase.


That other dimension where Tomorrowland exists is not so very different from the Valhalla that the War Boys seek through battle. It’s not really real, it’s not here and now, it’s somewhere else in the ether. The War Boys seek to enter this other dimension through battle whereas, in Tomorrowland, Governor Nix is waging war on earth through this other dimension. Furthermore, the fact of the matter is that extreme and fundamental creativity is also violent, destroying old ideas and practices. It is dangerous.

In a sense, the worlds of the two films re mirror images of or inversions of one another. All that’s really different is the set dressing and costumes. The positive creativity of Tomorrowland is extra-legal while the action of Fury Road is set in s world where legality as we know it is irrelevant. Don’t let the futuristic architecture and the Disney imprimatur fool you; the world of Tommorowland is as out-of-control as that of Fury Road. The underlying energy and intention is the same.

The spiritual connection, if you want to call it that, between graffiti writers and War Boys is obvious to anyone who knows much about the art. “Bombing” is a term of art in graffiti culture, but it has nothing to do with explosives. It’s about “getting up” (another term of art, meaning to write or paint) in something of a rampage. Susan Farrell, founder of Art Crimes, the oldest graffiti site on the web, once characterized graffiti as a cross between extreme sport and art.

One aspect of getting up is simply to get up in places that seem all but impossible to reach: How’d they do that? 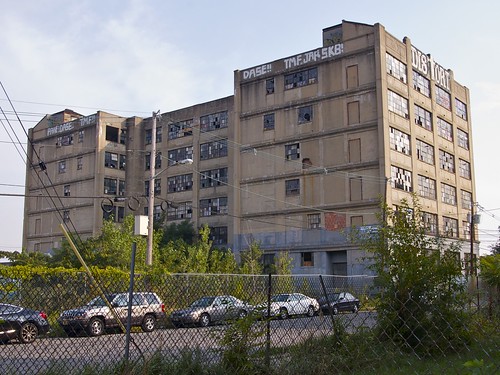 But there’s also visual virtuosity, which takes time and skill. 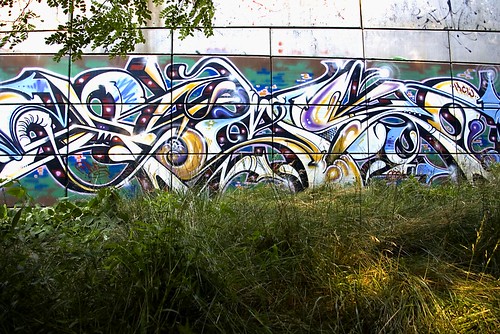 Writers compete over access to walls. I’ve documented a battle that was spread over several blocks in Jersey City. And, of course, as most graffiti is done illegally, the activity is something of a low-scale battle against ‘legitimate’ society.

But then, the Plus Ultras of Brad Bird’s Tomorrowland operated entirely outside the authority of existing nations and international authorities. And our plucky protagonist, Casey Newton, works at sabotaging a NASA launch pad, which is hardly the act of a well-behaved law-abiding citizen. She has her reasons for doing that, and graffiti writers have their reasons for bombing walls. Destructiveness is not the point of either activity.

Both are about making room for a future. Graffiti writers are in effect claiming turf for a new civilization. Now I rather doubt that such thoughts are much on their minds (nor, alas, are they on anyone else’s minds either). They’re more concerned with mere psychic survival. Without that, there isn’t even a viable present. With it, there’s the possibility of a future.

It’s up to us to accept their offer and to create that new civilization. 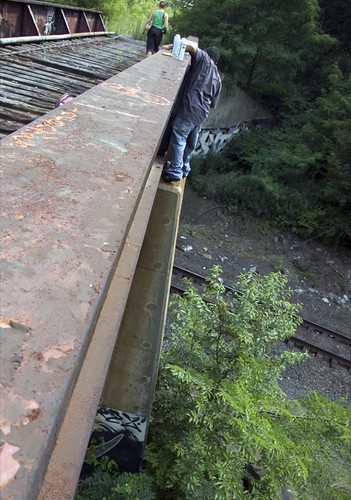