But I can’t do that, not while I’m being a Martian Anthropologist. In that role I have no choice but to take what the natives do as being quite serious. That is, serious in the sense that it indicates what’s going on in their society.

Here’s Woodstock, a character from the comic strip, Peanuts, which is surely smack dab in the center of post-war (WWII) American culture and which has shown up in graffiti culture since the mid-1970s–that is to say, from the beginning: 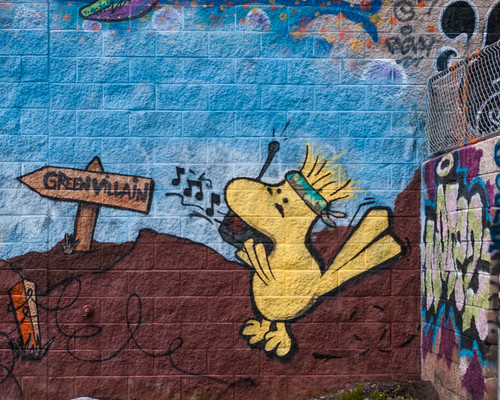 The headband establishes Woodstock’s hippie cred and the music-blaring transistor radio dates him.

The “Greenvillain” sign is a shout-out to Greg Edgell, who runs Green Villain, the production company that’s organizing the graffiti on the soon-to-be-demolished Pep Boys building in the Newport area of Jersey City. This is painted on the southwest corner of the building.

But why the brown? Is it supposed to represent bare dirt? What about the black loops? Since I’ve seen the whole mural I’ll tell you what it is, it’s barbed wire. Woodstock is strolling around on a battlefield. Vietnam perhaps? After all, the war there was going hot and heavy when the flower children gathered in the mud at Woodstock, New York, and listened to Jimi Hendrix transform “The Star-Spangled Banner” into a war protest anthem.


Here’s what we see when we turn the corner: 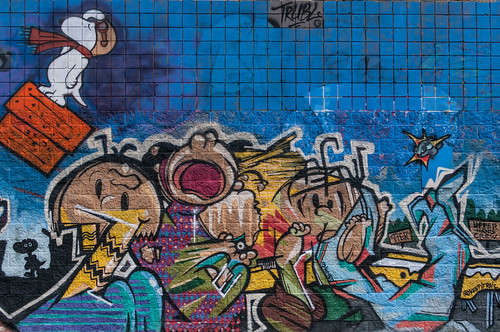 Woodstock’s pal, Snoopy, is there to the left, on the top of his dog-house flying in the sky, and riddled with bullet holes. He’s wearing the cap and the scarf of the WWI flying ace he pretended to be. He’s saluting valiantly as his plane goes down (we’ll see the smoke in the next image).

While I can’t really read the name below, the name is obviously written in characters from Peanuts. We’ve got Charlie Brown at the left: the zig-zag pattern of his jersey gives him away. Then we’ve got Lucy yelling about something and then, I believe, Schroder (I’m looking at the hair). There seems to be a football below. Finally, at the right, we have Linus, clutching his security blanket, which is itself the last letter of the name.

Look up top, just right of the middle. There’s eight tiles that haven’t been covered in (sky) blue. They’ve got “TRUBL” on them. That’s from whatever had been there before and it has, presumably, been left untouched as a courtesy.

Here we see the smoke billowing from Snoopy’s damaged Sopwith Camel and we can see explosions in the air here and there: 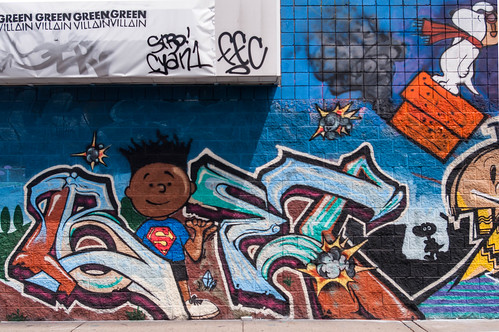 If you look near the bottom left you can see what appears to be Snoopy in silhouette, perhaps a representation of the WWI flying ace wandering the battlefield behind enemy lines after he’s been shot down.

I read the name as “BSET”, where the “S” is on the boy’s Superman jersey. Notice, though, that above the boy’s foot there’s what appears to be a gemstone of some kind. Perhaps it’s wandered here from the Scrooge McDuck comic?

One more tick to the left and we can see more barbed wire and some character in an army helmet: 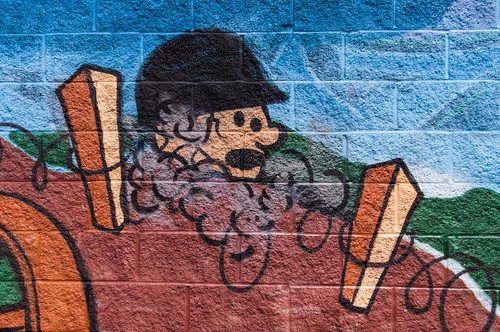 This, clearly, is war. Here’s the whole front panel: 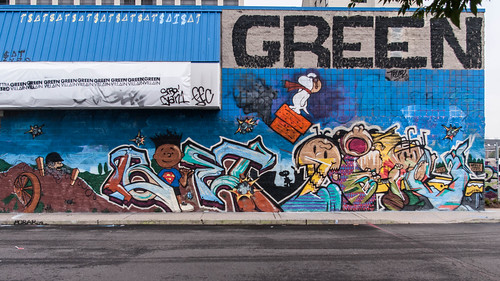 And here’s the whole thing in one shot: 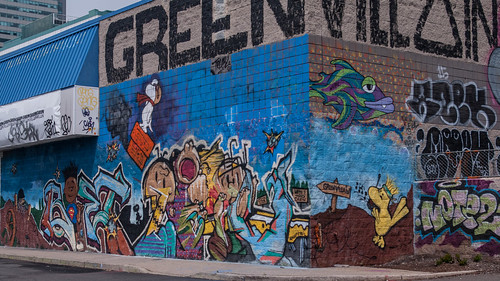 What war? Vietnam? Not really. Just war, but war being fought by the characters of one of America’s most beloved comic strips, Peanuts. America as war? The war that is America?

Ironic? I suppose so. Though I think it pushes as bit beyond irony. Post-modern. Surely. Very much so (heard in the voice of Martin Sheen in the briefing scene from Apocalypse Now). Deconstructive? In the popular sense of the term, surely. Perhaps in the more robust and demanding sense that Derrida originally gave the term. If you want to argue that line you might want to follow through on the fact that graffiti is, after all, about names, and that its practitioners call themselves writers.

And now we’re getting downright Biblical: Handwriting on the wall.