Mind the Gap: Reality and Prophesy in Nausicaä

With the arguable exception of The Castle of Cagliostro, Hayao Miyazaki never sets his films in a realistic world. Each world differs from our familiar world in some way. In the case of Porco Rosso, for example, the difference is minor. The title character is a man with the head of a pig. He wasn’t always like that – we see a flashback to an earlier time when he was fully human – and there are hints that Porco has been restored at the end of the film. But we never see him, so we don’t know.

In contrast, the world of Howl’s Moving Castle differs from our world in major ways. Witches and wizards are routinely called to serve in wartime and the titular castle has a door that opens on four different locations in the world. The working of spells is central to the film, which is also filled with strange magical creatures neither human nor animal.

And so it goes with the other films. All strange, but some only a bit, others middling, and still others, very.

I’m interested in the world of Nausicaä of the Valley of the Wind. To a first approximation, it is much like our world, obeying much the same physical and biological laws. A thousand years in the past industrial civilization had been destroyed in a big conflagration and now humanity is hanging on by a thread as the toxic jungle spreads and destroys village after village. The jungle is populated by huge insects, much larger than any insects we know, and fungi. But it’s not obvious that these insects and fungi operate on exotic biological principles. Nor do we see any spirits, such as those in Spirited Away, or animal gods, such as those in Princess Mononoke.

Still, if we agree that those insects and fungi are baseline reality, Miyazaki plays with reality in, shall we say, curious ways. The central character, Nausicaä, is regarded as extraordinary by all who encounter her. She has an empathy for and understanding of the insects which is extraordinary. Yet, we know that she has studied them, and the jungle quite carefully. The first time we see her she carefully collects a spore sample. Later we see that she’s built an underground laboratory. Could her mysterious empathy and understanding simply be the result of systematic exploration and study?

Even if that is so, that would not explain the most mysterious event of all – how, at the end of the story, she dies and is then brought back to life by the Ohmu, large many-eyed armadillo-like insects covered in hard shells. Strange and wondrous though that event may be, that’s not what I want to look at. We just have to take that event on faith, if you will. That’s just how this world works.

The event I want to consider is strange in a more modest way.

Early in the film Nausicaä is in her father’s bedroom along with Lord Yupa and Obaba. Her father, King Jihl, is ill and won’t live much longer (in fact, he's murdered). Lord Yupa has just come back from a year-long journey to survey the state of the jungle. Obaba, the Wise Old Crone, asserts that he’s been looking for a messiah-like figure whose coming has been foretold in a 1000-year-old prophesy depicted in a tapestry hung on the wall: “That one, wearing a robe of blue, shall descend onto a golden field. To forge once again the lost bond with the land. And lead everyone, at last, to a land of purity.” Yupa denies that he’s been searching for such a figure, declaring it to be a myth.

Now let’s zip to the end of the film. Nausicaä’s people have come close to being destroyed. Their village has been occupied by Torumedian troops and they’ve had to burn their forest, which had become infested with poisonous spores. Meanwhile, the Pejites (who were at war with the Torumekians) stampeded a large herd of Ohmu toward them, a stampede that would have destroyed them all had Nausicaä not stopped it by returning a baby Ohmu to the herd. In the process she had been fatally wounded by the Pejites.

The Ohmu revive her by using slender tentacles, that also serve as sense organs: 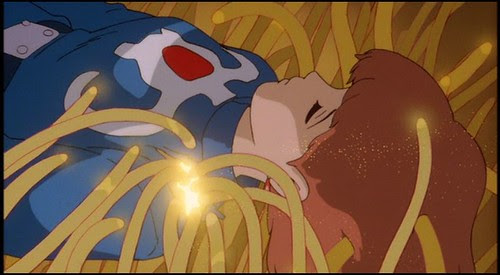 As I’ve already indicated, the mystery of the healing isn’t what interests me. I’m willing to take that at face value. The incident that interests me happens once the Ohmu have raised Nausicaä into the air upon a sea of golden tentacles: 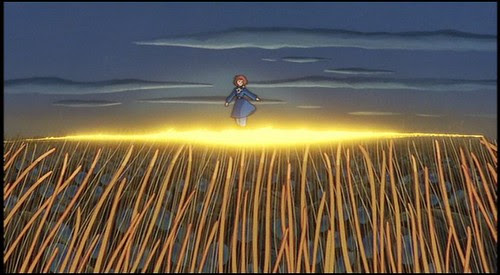 Obaba, who is blind, asks some children to tell her what’s happening. They tell her that Nausicaä is wearing a strange blue dress and walking through a golden field. That’s all Obaba needs to invoke the old prophesy: “That one, wearing a robe of blue, shall descend onto a golden field.” As she does so, we see an image which, presumably, matches what she sees in her mind’s eye: 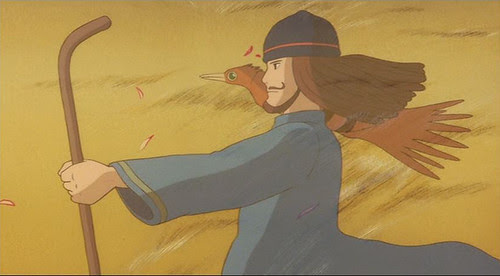 The figure in the image is clearly male, as was the figure in the tapestry on the wall in old King Jihl's room. And the figure had a bird on his shoulder. Nausicaä, of course, is female, and she has a green-eyed fox-squirrel on her shoulder: 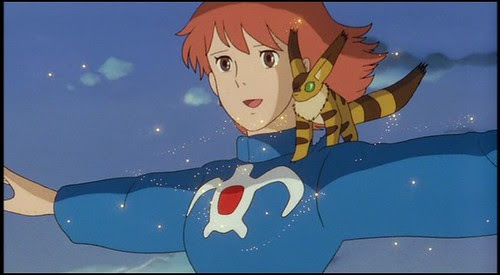 There is a clear mismatch between the prophesy and what actually has happened. What are we to make of that mismatch?

We could regard it as close enough, so that Nausicaä’s life, or at least this incident, has indeed been foretold. That would seem to validate the worldview in which that prophetic tapestry is embedded. But we could also say, no, the mismatch is absolute and Obaba’s mistaken in believing that Nausicaä is the fulfillment of ancient prophesy. Would this force us to discount the worldview woven around that prophetic tapestry?

I don’t know. It’s not at all obvious to me that Miyazaki leans one way or the other. Rather, it seems to me that he deliberately has left that question hanging open at the end of the film. Sign and referent do not match up. And that, is that.