Let’s return to Beep, Beep, the Road Runner cartoon I’d examined Saturday. I want to take up a motif I’d noticed, but passed over.
As I indicated, one series of gags takes Coyote and Road Runner into an old cactus mine, where both wear lamped miner’s helmets. As the chase comes to a close, they enter a zigzagging passage which eventually splits, with Road Runner taking the upper passage: 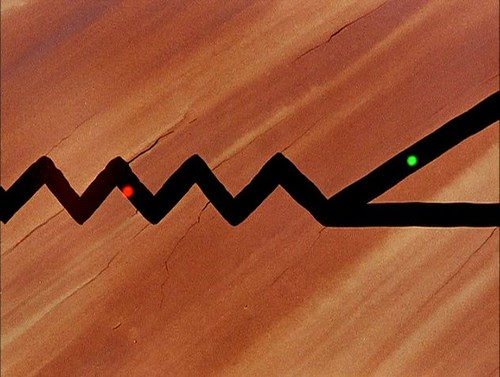 Coyote takes the lower passage, but continues his zigzag course, bouncing off the ceiling: 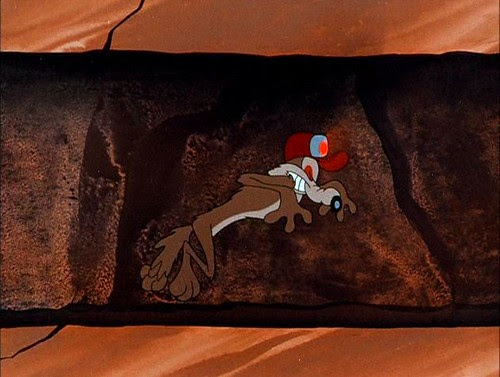 He comes to rest in a dark passage: 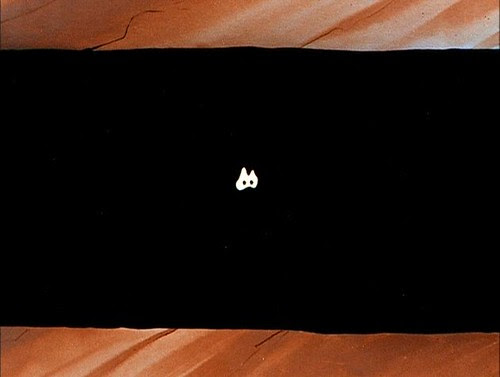 And lights a match, revealing that he’s surrounded by TNT: Of course, the TNT explodes. But we don’t see the explosion underground. We see it aboveground, where cactuses go flying: 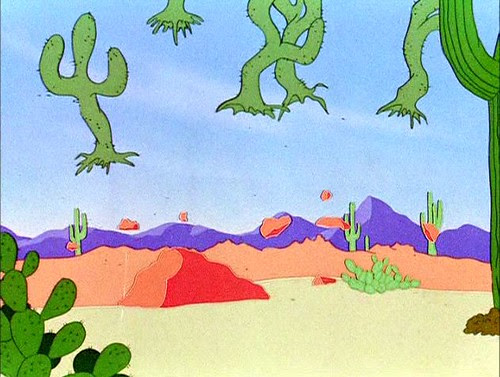 Here’s the motif that interests me: 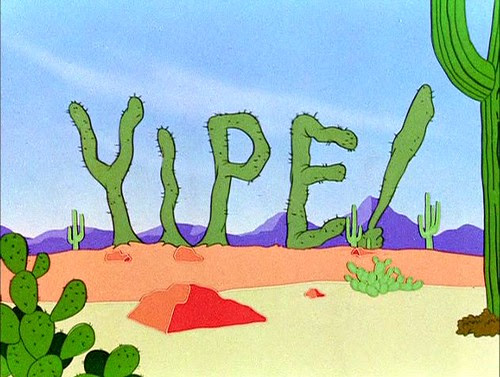 When the cactuses reseat themselves on the ground, they spell out “Yipe!” – as though they’re yelling on behalf of Coyote. It’s a good gag. But, I believe that it’s more than that.
Jones repeats it, albeit in a different form. Coyote ties himself to a rocket, presumably so that he can catch up to Road Runner: 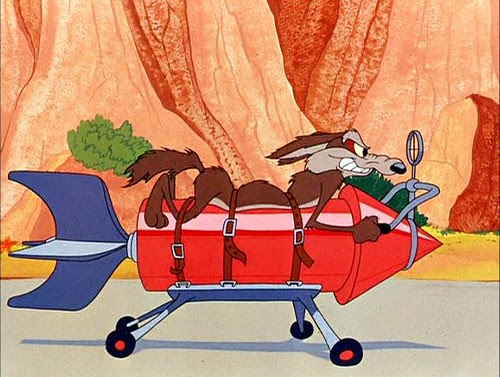 When the rocket takes off, however, it doesn’t go horizontal, it goes vertical . . . 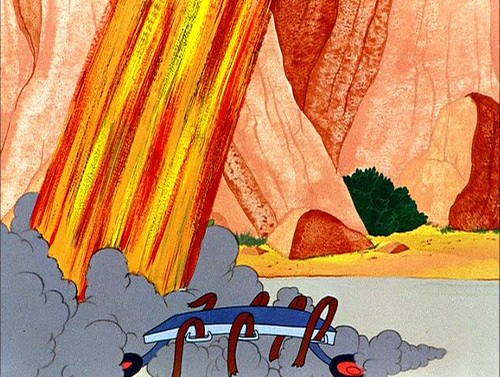 explodes in a shower of fireworks . . . 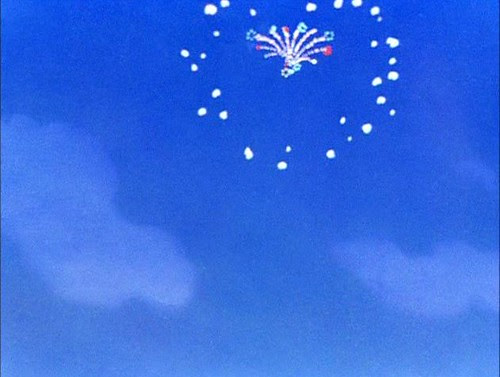 and they form themselves into an advertisement: 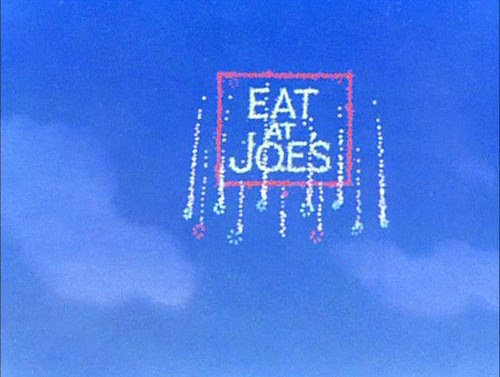 Again, an explosion leads to writing, first by cactuses, now by burning particles.
Why the writing? Yes, it makes a good gag, but why?
Let me speculate.
As I argued Saturday, the Road Runner cartoons are about the distinction between human desire toward the world and the causal mechanisms operating in the world. One might even say they’re about objectivity, reason, science. Hence every cartoon in the series opens with pseudo Latin names for Road Runner cartoons and every cartoon emphasizes Coyote’s ingenuity in constructing contraptions to catch Road Runner. He reasons things out, and tests his devices before using them. And yet they fail.
Two thoughts: one old, one a bit newer. The old thought is that abstract reason starts in anthropomorphism and then, at least sometimes, proceeds to carve away the human elements until nothing is left but impersonal causal forces operating between impersonal objects. The newer thought is from evolutionary psychology, that the human brain is, above all, a social brain. The massive size increase, relative to the brains of other primates, is to accommodate the needs of a richer and more complex social life.
As a corollary to the second thought, the newer one, let us posit that the neural machinery for dealing with social life is the richest and most versatile neural machinery we’ve got. Thus, we’re going to use it to think about our most difficult problems, even when they are not problems of social life. That leads us to the first thought, the older one. Abstract reason begins in anthropomorphism because that’s how it gains access to our most sophisticated computational machinery. To use Mark Changizi’s term, the social brain has been harnessed by reason and, in particular, by scientific and technical reason.
And that’s what’s going on when the cactuses come down spelling “Yikes!” and the fireworks enjoin us to “Eat at Joe’s”. The social brain is peeking through, using a medium natural to it, language.
There is in fact almost no social interaction in Road Runner cartoons. We have only two characters and their only face-to-face interaction comes when Road Runner taunts Coyote. Thus the social brains of the audience can be given almost entirely to the parody of scientific reasoning that is the substance of these cartoons. That parody, however, DOES make and preserve a crucial distinction, as I argued in my earlier post. Wile E. Coyote’s desire to convert Road Runner into food has no effect on the causal interactions exhibited by his devices, schemes, and contraptions. Instead of regulating the interaction between two or more actors, ego (that is, itself) and one or more alters, the social brain is regulating the interaction between desire and causality. Yet it’s still a conversation, and, as such, requires a conversational space.
As Mike Barrier points out in his commentary (in Vol. 2 of the Looney Tunes Golden Collection), we, the audience, enter the cartoon looking over Wile E. Coyote’s shoulder; he plays to us and thus draws us in, on his side. At the same time we’re aware of things Wile is not. We’re the ones who see “Yikes!” and “Eat at Joe’s”. We’re the ones who exercise the distinction between desire and causality. We’re the ones who learn that, no matter how ingenious it is, no matter how fast it can move, desire can never overtake causality. It’s a bitter lesson, but one essential to the conduct of reason.