I would like to clarify my earlier critique of Lakoff and Turner on “To a Solitary Disciple” (from the third chapter of More Than Cool Reason) by offering a crude account of how I would characterize the relationship between the text of the poem and their global reading.

Consider the following diagram. We have a fragment of a cognitive system above the double line and a sensory system (vision) below it: 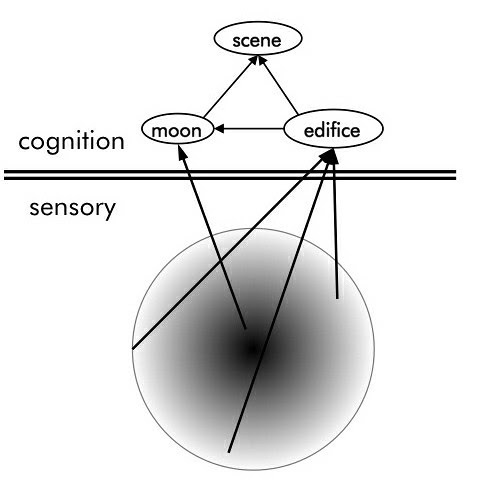 The sensory system contains a simple image schema, one in terms of which we can define two metaphor mappings – IMPORTANCE IS CENTRAL; LESS IMPORTANT IS PERIPHERAL – and one metaphorical inference: ESSENCE IS CENTRAL. While Lakoff and Turner discuss image schemas in the book, they don’t explicitly invoke them in their treatment of essence at this point. The cognitive system contains the concepts underlying the text of the poem, and the diagram only explicitly indicates the moon and the edifice (of the church), which are conjoined as elements of some scene. The moon is linked to (mapped to) the center of the image schema while the edifice is linked to the periphery of the schema. The sense of the diagram, then, is that the moon is central while the edifice is peripheral.

Note that those metaphor mappings (IMPORTANCE IS CENTRAL and LESS IMPORTANT IS PERIPHERAL) are not verbally represented in the diagram, nor is the inference, ESSENCE IS CENTRAL. Such verbal representations aren’t needed. I have replaced those verbal statements with diagramming conventions.

The sense of the diagram is that the moon’s centrality is understood directly in terms of the underlying image schema. In effect, the link between the center of the scheme and the moon node IS one mapping while the links between the periphery and the edifice node is the other mapping. The link (notice the arrow head) from edifice to moon asserts that moon is more salient; that is the metaphorical inference.


As I’ve already said, the diagram is a crude one. A lot more machinery is required to obtain that inference from the text of the poem. Off the top of my head, I don’t know how to construct the machinery. I know that Lakoff and others have done quite a bit of work building a neural version of the model over the last two decades; perhaps they now have the machinery to do that. But they didn’t have it when More than Cool Reason was published in 1989.

What, you ask, about the global reading, you know, the one that talks of religion?

Why not, you ask?

Because readings, that is, explicit interpretations, are not essential to appreciating poetry. One can enjoy a poem perfectly well without offering up an interpretation That is how most people have enjoyed most poems. The routine production of readings of literary texts is mostly a project of the literary academy in the second half of the previous century. That’s when interpretation became central to academic literary study.

Such interpretation is a secondary activity and, as such, it involves creating cognitive machinery purpose built for the task. David Bordwell has argued that point with respect to film in his book, Making Meaning: Inference and Rhetoric in the Interpretation of Cinema (Harvard 1989). As far as I can tell, the arguments he’s made for film apply to literature as well. One learns a body of concepts about literary texts, one learns how to identify textual features picked out by those features, and one learns how to construct a reading in terms of those concepts and those textual features.

With that in mind consider the following diagram, which has the same form as the previous one: 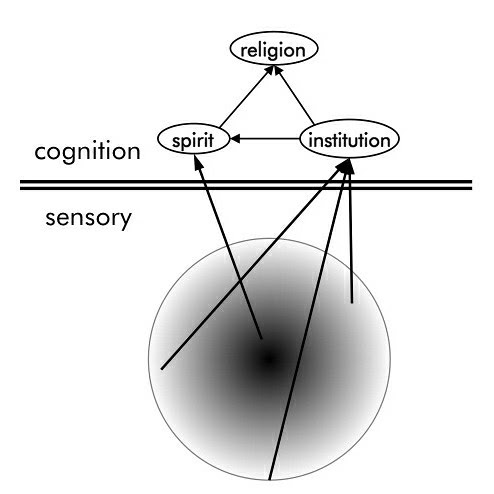 That is so because the discourse about religion is independent of the discourse in Williams’ poem. One can talk about the spirit vs. the institution in religion without ever referencing the poem and one can responded to the poem without ever having a theological thought.

The literary critic, however, sees some relationship between the poem and the religious discourse. Consider this diagram: 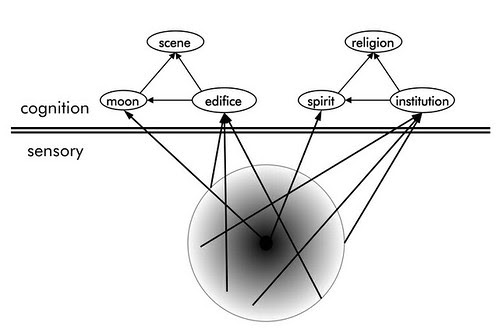 All I have done is conjoined the two previous diagrams. As the image schema is the same I’ve not bothered to make two copies of it.

However, we still don’t have any explicit relationship between the two cognitive structures. They are both there, and WE can see the resemblance perfectly well. But that is because we are outside the system itself and peering into its innards in a way that the system itself cannot do.

For that reason I haven’t depicted any connection between them. Lakoff and Turner have argued for a direct mapping from the poem (as source) to the religious discourse (as target). But that, I have previously argued, is implausible. Are they seriously proposing that such a mapping is “hard wired” into anyone’s nervous system, which is what cognitive metaphor theory implies? Maybe they believe that, but I do not.

I think the connection is more indirect. The following diagram depicts a different proposal: 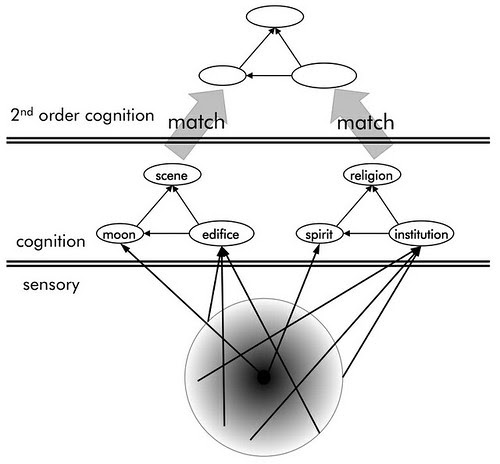 We now have a second order cognitive system (which Hays called gnomonic in Cognitive Structures, HRAF 1981). That system has matched the two first order patterns, one from the poem, and the other from religious discourse, to a second order pattern having the same form. The system has now “noticed” that the two patterns are the same.* Given that similarity, the critic is in a position to assert propositions about religion as an interpretation of the poem.

This pattern-matching process is done on the fly and does not depend on permanent linkages between these two domains. The pattern-matching apparatus can be assembled at will. And it dissipates when it is no longer needed.

As such, it seems a bit like conceptual blending. But I don’t see that there is any blending going on here. The two domains – poem, religion – remain separate and there is no third domain constituted through them. All we’ve got is a critic constructing a reading, though it does somewhat resonate with the notion of allegorical projection that Per Aage Brandt mentioned in his comment on my earlier post.

*Symbolic pattern-matching of this kind is well-understood and has been thoroughly investigated in the disciplines of computational linguistics and artificial intelligence. It is computationally demanding.