A Leak in Cool Reason

The cool reason I have in mind is George Lakoff and Mark, More than Cool Reason (1989), one of the founding texts of cognitive poetics. The leak is in the way they reason about their global reading of “To a Solitary Disciple,” by William Carlos Williams.

The poem presents a simple scene, the moon in the sky above the steeple of some building, a church presumably.

Lakoff and Turner set out to discuss the poem on two levels (p. 141). On one level they discuss cognitive metaphors the poem employs laying out that scene. They find a number of cognitive metaphors: SEEING IS TOUCHING, FORM IS MOTION, and EVENTS ARE ACTIONS. They also note that the poem employs “fresh”, metaphor that is novel and has not been precipitated down into the cognitive unconscious as a fragment of mundane working conceptual structure. This much of their analysis corresponds with the work I have done with Sonnet 129 and to the work that has more generally been done in computational linguistics and artificial intelligence on text comprehension and generation. As such these metaphors are directly related to the words in the poem itself and to their underlying meaning.

These metaphors belong to the cognitive base on which the poem is constructed. It is their second level of analysis that interests me here, for it is quite different in character. And its relationship to the poem itself is, if anything, even more problematic than that of a reading in, say, a Freudian, phenomenological, or deconstructive mode.

Of this second level, they assert “the poem as a whole can be given a metaphorical interpretation, in which the disciple to which the poem is addressed is told how to understand the nature of religion in terms of the scene presented to him” (p. 141). They note that the metaphorical global reading they propose is not the only possible global reading. What interests me is not so much the details of how they construct this particular global reading, but the overall relationship they posit between this reading and the poem itself.


As you may recall, conceptual metaphor theory is about relationships between different semantic domains. Structure in the source domain is used to give meaning to entities in some target domain. In the mapping, LIFE IS A JOURNEY, for example, the mundane business of traveling from one place to another is used to structure the more abstract business of living one’s life. Waypoints in the transit from one place to another correspond to life goals (e.g. graduate from school, get a job, get married, establish a home, etc.) and obstacles in a journey correspond to obstacles in life (e.g. failing a class in school, unable to get a job, etc.). In their global reading of the poem Lakoff and Turner propose that the poem itself is the source domain while the global reading is formulated in the target domain, religion in this case.

The illustration below shows the inter-domain relationships on which Lakoff and Turner seem to be basing their work on the poem. At the left we have what I am calling the world of Concrete Things and Events. The Poem itself is in the middle. Their first level analysis shows how the World of Concrete Things and Events contains source domains for various target domains represented in the poem. 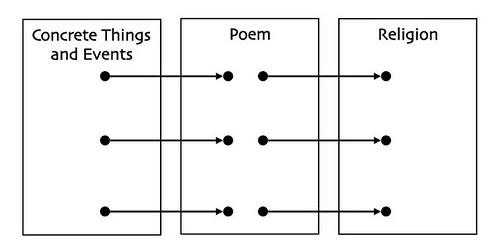 The poem, in turn, serves as the source domain for concepts in the target domain of religion. That is to say, Lakoff and Turner are arguing that certain comments in the religion domain are grounded in the poem itself. I find that a bit peculiar. That implies, in the logic of cognitive metaphor theory, that you cannot understand those religious concepts unless you first understand the poem. Just as the LIFE IS A JOURNEY metaphor used the domain of physical travel to ground assertions about life in general, so “To a Solitary Disciple” grounds assertions about religion. They tell us (p. 148):

They to develop this thought in terms of this metaphor mapping:

IMPORTANCE IS CENTRAL; LESS IMPORTANT IS PERIPHERAL, as in expressions like “Let’s get to the heart of the matter,” “What are the central points,” “We haven’t yet delved deeply into the matter,” “We uncovered an important truth,” and so on. The immediate metaphorical inference is that ESSENCE IS CENTRAL.

They go on to point out that, while the poem presents the appearance of the church – e.g. “converging lines/ of the steeple” – it also asserts a relation to the moon above, that is, to something beyond the physical edifice of the church. And that somehow points our way to the essence of religion.

But there is a problem in all this, and it shows up in the sorts of propositions they claim are authorized by or grounded in the poem, such as these (p. 151):

A bit later we learn “that the essence of the divine, which the church is to serve and protect, is not the abstract, perfect, lifeless doctrine of the institution, but rather real, imperfect, vital beings” (p. 153). Ultimately, “the disciple is to transcend, to rise above, the institution” (p. 154).

As far as I can tell, these various assertions are perfectly intelligible without reference to the poem. The assertions are certainly abstract, but those abstractions are not effectively grounded in Williams’s poem, wonderful though it is. I can hardly imagine that someone who does not understand those assertions would much benefit from reading “To a Solitary Disciple.” They would do better by reading about the ideas and lives of religious reformers, such as Martin Luther or Gautama Buddha. That’s where we’re more likely to find the grounding of those religious ideas, not in Williams’ poem.

The details of their analytic work, then, show something of why a particular analogical correspondence between poetic assertions and religious assertions is plausible. Lakoff and Turner are using some third body of conceptualization — cognitive metaphor theory — to point up correspondences between two other bodies of conceptualization, a poem, and some ideas about religion. But I’m afraid that their reading of a reading thus leaves the poem itself untouched.

Which, perhaps, is a virtue. But that, alas, is not the virtue literary criticism ordinarily claims for itself.

ADDENDUM: I've written a follow-up post in which I offer an alternative view of the relation between a poem and a reading of that poem.