Think Graffiti: The Academy of the Wall 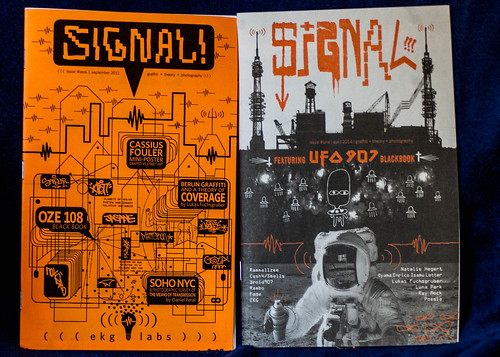 So you want to read about graffiti – and by “graffiti” you mean the form of visual expression that arose in New York City and Philadelphia in the late 1960s and early 1970 and wrote across walls world-wide by 1990. What to read? Where do you start?

The first question is a tough one, to which I’ll return in a sec. The second one is easy: Start with Mailer and Naar, The Faith of Graffiti. It was the first book about graffiti and still, as far as I know, the best. Why the best, given that the art has changed considerably since Naar’s classic photographs?

First, those photographs ARE classic. Few graffiti photos since come up to Naar’s standard, and that’s important. For photos belong inside graffiti culture and are not merely a record of and commentary on it. Second, Mailer’s text took graffiti seriously and put it in its proper context, which is that of world-wide art since the beginning of time.

After that, though, what next? Lots of possibilities, but Eric Felisbret, Graffiti New York, is one possibility, and a good one. As the title suggests, it’s an informal history of graffiti in New York City from the beginning up until not too long ago. By “informal” I mean that the book is written for a general audience and is not a formal academic history with all the conceptual apparatus that implies. Which is fine. But someday formal academic histories of graffiti are going to have to be written.

As such, it presupposes little or no prior knowledge of graffiti, which is true for most of the coffee table graff books around. And, like most such books, it is skewed toward pieces, aka masterpieces, the large elaborate murals that, at their best, just look so damn! goooood.

But they aren’t all of graff, not even half, and Felisbret knows that. Graffiti New York comes with the standard features of such books, an explanation of graffiti’s major forms – tags, throwies, and pieces, a glossary (a good one, too), and quotations from the writers themselves. Since it’s about the New York scene the book has sections devoted to the five boroughs and a chapter on the gallery scene.

But perhaps its best feature is the chapter on the community, graffiti as a form of social organization. You can pick this up from the other books, but Graffiti New York gives it focal attention: the writers, crews, hubs, women, and even the cops, all are covered. This is where graffiti lives, and how it lives in the community. If you want to understand how graffiti grows and flows, and why it’s important, you need to understand the community.

Still and all, Graffiti New York fits the standard mold, and that’s a scheme that treats graffiti as, well, you know, as art, capital “A” Art. On the one hand that’s a good thing, a progressive move. It’s a move Mailer took in his text, The Faith of Graffiti, but Mailer was writing in the previous century, indeed, the previous millennium. It’s time to move on.


For as Mailer himself knew, graffiti is a critique of capital “A” Art and the social formations it emerges from. It’s the platform for a new world cultural order. Or it can be.

Just what it is, we don’t know that yet. The coffee table books have little choice but to treat it as yet another turn of the Art wheel. They are, after all, commercial enterprises, like the galleries and, increasingly, museums that show graffiti. They can’t see the potential for a new world because that’s not their business.

If you want to see that potential, where can you look? If you want to advance that potential, how can you think the future? If that’s what you’re after, then hustle your butt over to EKG Labs and pick up the two issues of Signal, a graffiti zine. The fact that it’s a zine tells you something straight off – though I’ll let you characterize that something for yourself. Just leafing through the pages shows you the deal, black & white spreads of tags, throwies, and, yes, pieces. Signal is close to the streets, as close as you can get and still be in a codex (as opposed to a scroll).

There’s lots I could say about these two books, but I won’t. The photo at the head of this post gives you a good feel for them. But I’d like to dip into “A Major Minority” by Poesia & Ekg (Signal #one, pp 40-45). The essay marks the 2014 Graffuturism exhibition that took place at the 1AM Gallery in San Francisco. The exhibition was a survey of graffiti and subsequent forms of urban art, many, like graffiti, illegal.

...at its genesis this movement is rooted in the act of unsanctioned mark making in the streets, which on some level has guided and influenced everything to follow. This may be the true basis of contention by critics and institutions, who feel unconscious trepidation about promoting at art form that developed from illegal actions that brutishly and anarchistically challenge polite civil society, cultural mores, the legal system, and ultimately the capitalist economic system of profits and private property, specifically when it pertains to who controls public visual display and communications...These illegal visual disturbances within the urban radar matrix may be instigators of one of the most important aesthetic and cultural questions of our time, and, as the separation between economic classes continues to widen, this collective cultural query will eventually need to be answered with something other than the current legal system’s definition of these aesthetic acts. Their utilization of the simplistic definition of these aesthetic protests as merely Vandalism does not address the deeper meaning of Graffiti as a collective cultural statement, as well as spotlighting the element of illegality at the genesis and core of this art form.

The problem faced by the ART establishment, you see, is that ever since Duchamp hung a urinal on a gallery wall, or attempted to do so, the questioning of ART has been integral to the modern and post-modern ART styles of the 20th century. And when that questioning is done with the glitz and knowing winks of a Jeff Koons, why it’s Big Bucks for Koons and the gallery owners who live the life of the 0.1% while Koons’ army of assistants make a fast food wage, probably better (I hope), and swim with the 99%.

So how do you create an expressive form that both says THAT, and at the same time simply ignores that world and goes about creating a new one, treating the urban environment as the surfaces of cliffs and caves for a new humanity? That’s what graffiti is about, and that’s where you’ll find Signal.

And you’ll also find this diagram, available as a poster from EKG Labs, in which Daniel Feral, historian and theoretician, lays it out: 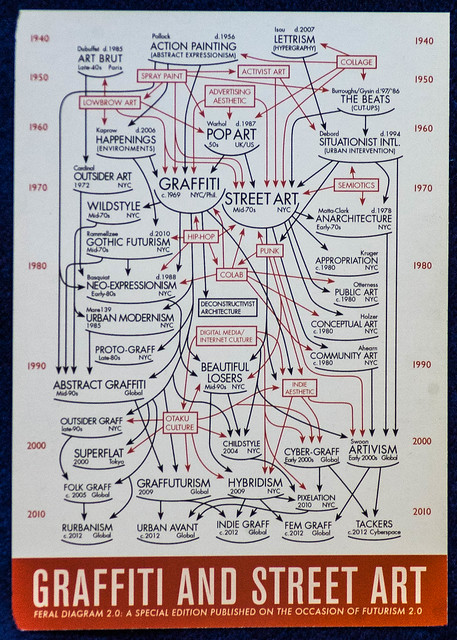 That’s knowledge. And it’s a pathway to the future.