“I Have a Dream” – Remembrance of “Nuggets” Past 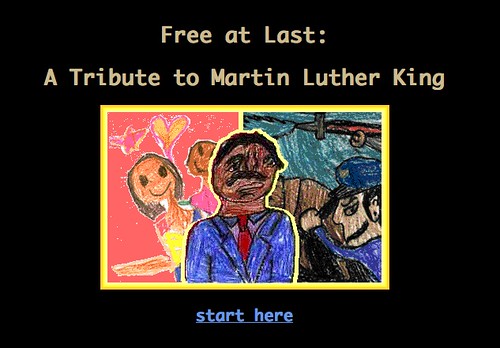 The phrase “I have a dream” is, of course, the refrain from Martin Luther King’s best known speech. “Nugget” is a term of art in the Connected Courses world that designates a bit of text that’s been tricked out and amplified by at least some of the wonders available on the web (scan down this page for a fuller explanation). Our assignment for this week is to create a nugget.

I’ve decided to substitute some old not-quite nuggets for making a new one. Back in the old days of the web, when you had to hand-code your html, I coupled up with Bill Berry to create a site that was first called “Meanderings” (after an email newsletter Bill had been circulating) but then became “Gravity” – a persistent black object to which everything was attracted, or at least that was the idea. One of the things we did was to create a tribute to Martin Luther King based on that famous speech. The idea was to pick words and phrases in the speech and use them as anchors for hyperlinks that would take you to some web page relevant to that topic, either directly or tangentially.


The execution, however, got a bit elaborate and took a crew two or three months of here-and-there now-and-then work. 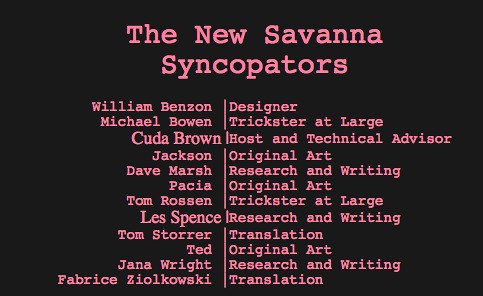 Notice the “original art” credits for Jackson, Pacia, and Ted. They were young primary school students on the West Coast (of the USA). In one of my many trips around the web I’d seen some charming illustrations they’d made of incidents in Martin Luther King’s life. I decided to use them in the tribute, though I worked the images over in some paint program I had at the time – Brush Strokes I believe. Of course I got informal permission to use them, though nothing in hard-copy.

As explaining the various presentations we offered is a bit tricky, I’ll skip it. But you can explore them if you wish, though I warn you that many of the links have rotted. After all, this first went up on the web almost 20 years ago. 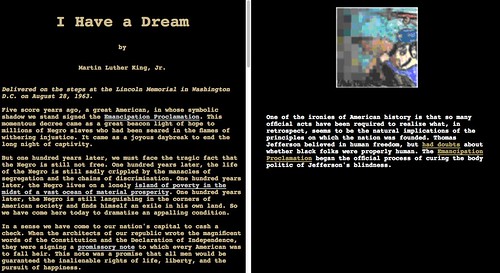 On the left you see the text of the speech. If you look carefully you can see hyperlinks in the text. We had 25 of them scattered throughout the speech, five by five (two presentations involved a 5 by 5 matrix). When you clicked on a hyperlink another display would show up on the right. At the top is a picture that is derived from one of the original images created by those children. Below it is a bit of text that is somehow related to the word or phrase linked in King’s speech. That bit of text in turn has hyperlinks, and they go out to the web at large.

Most of those links, alas, have rotted. One of my favorites went out to photographs of the Mississippi Delta. Another went to a small city in Japan that had performed Beethoven’s Ninth Symphony every year since, I believe, 1912. You got to that through a hyperlink anchored in the word “harmony.”

Here’s the fourth paragraph of the speech and it has a single hyperlink in it: 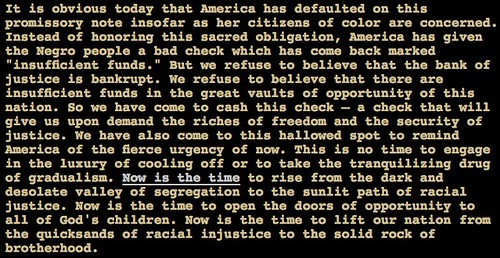 The under-lined phrase has deep resonance for any jazz fan, for “Now’s the Time” is one of the best-known tunes by Charlie “Yardbird” Parker, an alto sax player who was one of the progenitors of bebop. Accordingly, the gloss on that link is a short paragraph on the relationship between jazz and the Civil Rights movement (and, yes, I’m aware of problems in that paragraph that should have been copy-edited out): 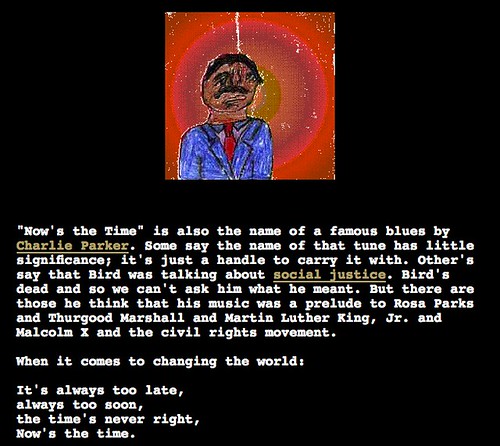 Both of the links in that paragraph are now rotten.

I’ve not gone through the whole tribute to check all of the links. I wouldn’t be surprised if they’ve all rotted. Nor would I be surprised if one or two are still good. When I looked at the tribute a month or so ago I quickly found one good link. When I tried that link earlier today it had rotted.

You get the idea.

I don’t know how many links went out to the web at large. Off hand I’d guess there were between 50 and 100. And we probably examined a dozen sites for every one that we actually used. Sorting through all that, creating the images, writing the html, testing it, and so forth, that took time. As I said up top, the tribute evolved over two or three months.

All of our interaction took place online through email. Though dial-up modems, too.

I’m still in touch with some of the New Savanna Syncopaters. Bill Berry (Cuda Brown in the credits) is a Facebook friend, as are Mike Bowen, Tom Rossen and Lester Spence. I’ve met both Bill and Mike face-to-face, but not Tom or Les, though I’ve come close. Back then Les was a graduate student in political science. He’s now a tenured professor at Johns Hopkins, where I did my undergraduate work back in the Civil Rights era.

But the time’s still now.

As Shakespeare said, though Lear, ripeness is all.