The Title “Heart of Darkness”

In the course of writing my open letter to J. Hillis Miller I reviewed the work I’d done on Conrad’s Heart of Darkness and realized that for all I’d written about the text, I’d said nothing about the title. That’s a minor matter, I suppose, but still: What about it? What’s the darkness, and where’s the heart?

King Lear and David Copperfield are named after principle characters and so, in an interesting way, is Moby Dick. Pride and Prejudice and A Passage to India are thematic. Since it’s not the name of a character, Heart of Darkness must be thematic as well.

If you knew only the title, and nothing else about the book, what would you think? If you knew the title and also knew that most of the story takes place in Africa or on the Congo, what then? I have no idea whether or not “darkness” alone would have triggered thoughts of Africa in Conrad’s readers, but “darkness” and “Africa” would likely have been strongly associated in many minds.

Between 1876 and 1877 Henry Morton Stanley traveled across central Africa from east to west. He published a book about the expedition in 1878, Through the Dark Continent. Roughly a decade later he traveled to relieve the besieged governor of Equatoria, Emin Pasha, and published the story of that expedition in 1890, In Darkest Africa. Both books were widely read.

I don’t know whether Stanley originated the trope or adopted it from some other source, and how much responsibility he bears for disseminating it. (See the graph of a Google Ngram query at the end of the post showing the rise of those tropes.) I am simply taking his books as evidence that the trope was well established a decade before Conrad published his book. The trope continued well into the 20th century and showed up, for example, in cartoons, as we can see from this screen shot from Bob Clampett’s 1938 Porky in Wackyland: 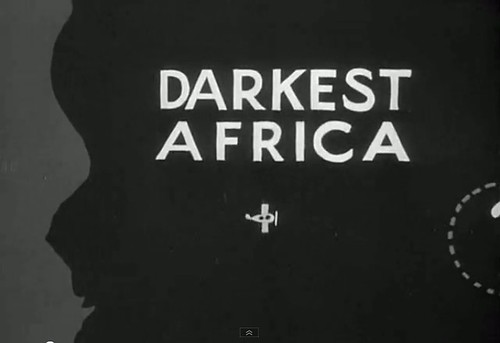 What of the heart? Kurtz’s station was deep in the interior of central Africa, putting it at the geographical heart of Africa. In that it was a trading post where Kurtz collected elephant tusks, referred to as fossil, it was also at the center of the European economic exploitation of Africa.

But there is something else: Kurtz’s fiancé, known in the book simply as the Intended. He had gone to Africa to make his fortune so this woman’s relations would regard him as being worthy of her. She was on Kurtz’s mind as he lay dying; he would ramble on about “My Intended, my station, my career, my ideas…” Marlow’s last act was to tell this Intended about Kurtz’s last hours. She wanted Marlow to lie to her in telling her that Kurtz died with her name on his lips. And that is what Marlow did, though Kurtz’s last words, we know, were “The horror! The horror!”

Could this Intended, Kurtz’s fiancé and the woman who tended to his mother as she lay dying, could she be this heart of darkness? If so, what does that do to our sense of the book?