In Memory of Bill Powers

This post is over two years old, but I'm bumping it to the top because I'm thinking about fundamentals of the mind and language. In particular: How much of it is computation? That, in turn, depends on how you define computation. Powers was a control engineer and created an elegant control-system account of the mind. My some accounts that's computation. By others it's not. It all depends. Back in the 1970s Dave Hays picked Powers' model to ground him computational model of cognition.

Just yesterday I learned that Bill Powers had died on May 24, 2013. Powers was an independent scholar and investigator. He came from an engineering background, had wide interests, and had a genial nature. Though I only interacted with him face-to-face on three or four occasions, I had some email correspondence with him for off and on over the years and his model of human perception and action is foundational to my work.

I first heard of Bill Powers in the Fall of 1974. I’d signed up for a graduate seminar taught by David G. Hays, who would become my mentor. The course was entitled “Language and Human Life,” which was an interdisciplinary rubric under Hays used for studying whatever interested him and his current students. I forget just how it went, but each one in the seminar got to suggest books and somehow we collectively arrived at a syllabus.

The first book up was one Hays picked, Behavior: The Control of Perception, by William T. Powers. It had been published in 1973 and received a good review in Science. Hays saw in it a way to ground his cognitive network model, which was at that time much of a piece with other such models (though it had a novel feature or two), in psychological reality.

We worked our way through the book, slowly and carefully. It was well-written and, though not dense, required deliberation and attention to detail. It had a number of relatively simple diagrams, such as this one (of a basic servomechanism): 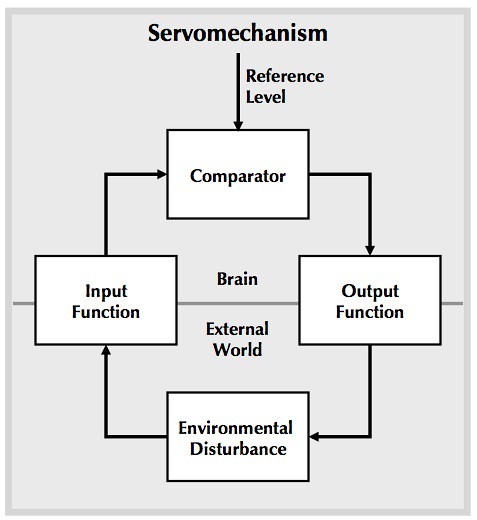 Much of Powers’ model was in those diagrams. The prose was commentary on them. There was an appendix with some simple algebra.


This is not the time and the place for a detailed account what we made of Bill’s work, but it became central to our own. In the Spring and Summer of 1975 Hays drafted Cognitive Structures (published by HRAF Press in 1981), an elegant, if at times obscure, model in which a sensory-motor system of Powers’ design was the basis and grounding for a cognitive network model: embodied cognition.

Powers was a control theorist, as the above diagram indicates. One of his innovations was to imagine behavior as being regulated by a stack of servomechanisms, a bit like this: 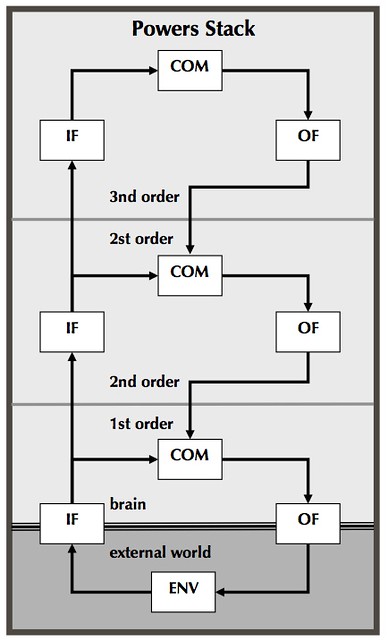 The bottom-level systems interacted with the external world and generated input to higher-level systems. They, in turn, regulated it. Each level received input from below, sent input up a level, and in return, was regulated from above and regulated the next level down. It was an elegant arrangement.

Powers hypothesized nine such levels (in 1973, more were added later), giving the most attention to the lower half-dozen or so, including suggestions about neural systems. He also built computer simulations that ran on PCs – he ran a four-part series in Byte Magazine in 1979. What Hays did was to replace Powers’ upper levels with a cognitive network, linking the network to the Powers stack through paramaters of perception, as he termed them.

Another innovation was to realize that memory could naturally be interleaved with the servomechanical stack, like this: 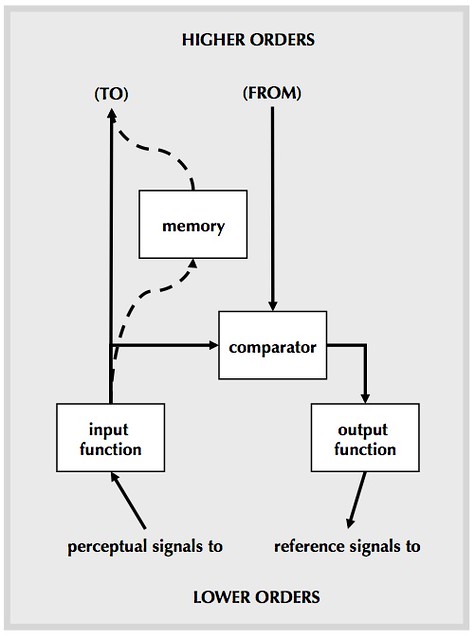 Those memory units would thus be distributed throughout the system. What Hays did was, in effect, to consolidate those memory units into a cognitive network that regulated a servomechanical sensori-motor system. This, in turn, implies that the cerebral cortex is but vast memory system for states and configurations of subcortical sensory, affective, motive, and motor systems.

That, in crude outline, is what we had done with Powers’ work by about 1980 or so. We then turned our attention to other matters.

Powers meanwhile had attracted a small group of people who were interested in his work and they made presentations at conventions of the American Society for Cybernetics. I attented two such meetings, one in Philadelphia, and the other at Foothills College in California. I kept in touch with the group for awhile – it organized itself into the International Association for Perceptualo Control Theory – and had occasional correspondence with Powers himself.

Most recently I’d read an old conversation between Gregory Bateson and Margaret Mead which got me to wondering about the use of the term “feedback.” So I asked Bill what he knew about its history. Here’s his reply, from Oct. 21, 2012:

I first encountered it in the 1930s when my father decided to build his own hi-fi audio amplifier, which used negative feedback to inprove its fidelity. All I knew was the term, but Dad was proud of having negative feedback in his audio system. Being only 10 years old or so, I had no idea why. Later on in the Navy, 1944-46, I came across it again in my electronics technician classes in the context of audio amplifiers, and then in different kinds of servomechanisms such as gun pointers, ship-steering systems and autopilots, and noise-seeking torpedoes. So it arose at the same time the discpline of control-system engineering was developing. Probably the earliest literature I've seen it in was an H. S. Black article in 1934 describing his moment of insight (August 3, 1927, on the way to work at Bell Labs via the Lackawanna Ferry) about how to use negative feedback to improve the amplifiers used in long-distance telephone systems. See

As early as the 1900s decade, the terms used were "regenerative" (positive) and "degenerative" (negative) feedback, though I'm not sure that "feedback" itself was used. I don't know when the switch was made to using the mathematical signs instead. By the time the new cyberneticists had picked up on control theory, it was all "negative feedback." Most of them barely learned anything about such systems.

He was a powerful and original thinker, that William Trevor Powers.

You will be missed.