Warhol Variations & the evolution of Macintosh graphics over 20 years

The Warhol, of course, is Andy Warhol. And the influence should be obvious, even if the tools are not. He used silkscreen printing to produce various versions, often brightly colored, of the same source image, often a famous person, such as Marilyn Monroe or Mao Tse-Tung. My source, which I'll reveal shortly, was somewhat different, as should be apparent in the image itself. 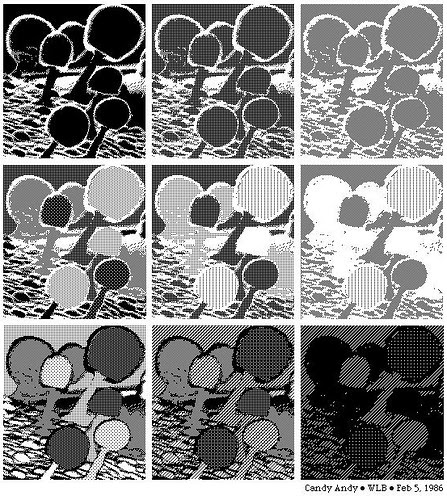 And I didn't have color available to me. I did that in MacPaint back in 1986. All I had to work with was a rather coarse bitmap that gave me either white, or black, but nothing in between. So I had to substitute texture for color in order to produce the requisite variations. 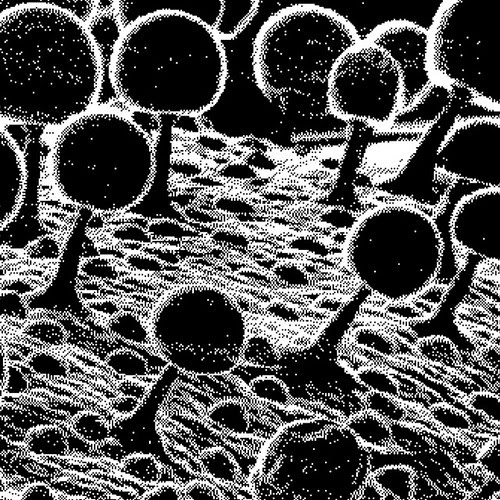 Actually, that's not the source. The source was a an electron micrograph reproduced in a magazine. As I recall, it depicted the surface of some fungus. I had to scan it into my trusty Mac Classic, which I did with a rather ingenious accessory. You removed the printhead from your Macintosh printer, a simple low-res dot matrix printer, and replaced it with a scanner that had a small 'electric eye'. You then placed your image in the printer, as though it were a blank sheet of paper, and then had the printer run the paper through as the eye scanned back and forth, sending the bits back to the Mac.

Some years and several Macs later I got Photoshop. And color. After quite a bit of messing around, I produced this: 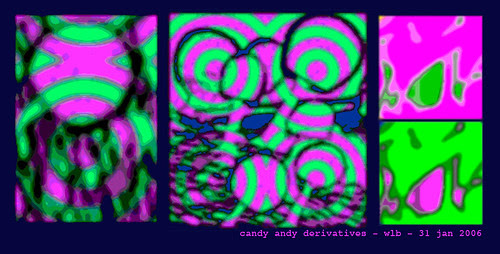 A CURIOSITY: If you look closely at the image I've called the original you'll see that it doesn't quite match with the one in the Andy variations. The Candy Andy square clearly comes from the upper right corner of "the original", but the original appears to have been clipped at the top and the right. I must have used a different file, but that, alas, appears to have disappeared from my hard drive.