Prompted by David Bordwell’s comment about King Kong being a candidate for ring form, I’ve decided to look into Gojira, the 1954 Japanese film that we drastically re-edited, with additional footage, to become Godzilla in America in 1956. Why am I analyzing Gojira? Simple, like King Kong, it’s a monster film.

And it’s one I’ve already worked on. And I’ve already got a candidate for the central scene, one I discuss in my essay-review of Gojira. This is the scene where Ogata, the Handsome Young Man, is going to tell Yamana, the Imperious (but kind) Father, that he and Emiko, Beautiful Daughter, are in love. It’s a tricky business because Emiko had been betrothed to Serizawa, the Brilliant Young Scientist, in childhood. Thus not only is he asking for Emiko’s hand in marriage, but he’s also asking to break a traditional arrangement, the childhood espousal. 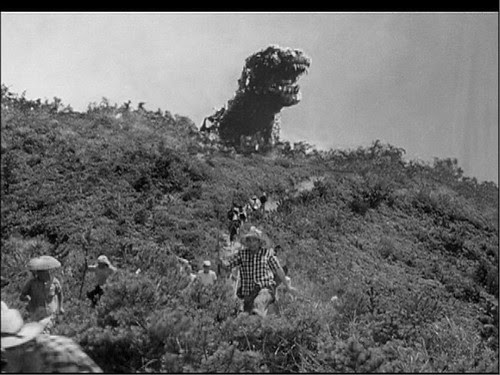 It does not go well. As soon as Ogata arrives at the house, he and Yamana get into a bitter argument, not about Emiko, but about Gojira. Yamana, who is a scientist, wants to capture Gojira and study him. Ogata wants to destroy him, as he is so very dangerous and destructive. The two get into a quarrel and Ogata leaves without ever having brought up his relationship with Emiko, the Beautiful Daughter.

Immediately after this scene Gojira attacks Tokyo, for the second time. But this attack is much worse than the first and lasts over 10 minutes on film (out of a total 98 minutes), making it by far the most sustained sequence in the film.


Why do I cast the confrontation scene as the center point? Because it conjoins what seem to be two otherwise different plot lines: 1) Gojira Attacks, and 2) Boy Meets Girl. In my essay I argue that these are, in fact, two sides of the same coin: Japan is changing and the old ways are dying out. Since these two plot lines don’t seem to have any causal connection, their conjunction in this scene is, shall we say, interesting. You also need to know that it is Serizawa, Emiko’s suitor, who finally destroys Gojira, and he commits suicide in the process.

When the film was re-edited for American release, the love plot was completely eliminated, thus changing the film quite drastically. My point here, though, is simply that, superficially, the love plot IS completely independent of the Gojira plot, and so could be eliminated while preserving the Gojira plot more or less intact – though some new footage was shot so the American distributors could reframe the story a bit.

That is to say, the two plots in the Japanese originally were so ostensibly independent of one another that one of them could simply be eliminated when the film was prepared for a very different audience. Thus, if the Japanese original is indeed a case of center point construction, that central scene has a lot of work to do, conjoining to apparently difference sequences of actions.

I’ve got more analytical work to do. But...

The point of this note isn't so much about the film as about the method. As I've indicated. I've already done quite a bit of work on this film, enough to produce a substantial essay-review. When I looked back at my notes I discovered that I'd also made a long table where each row indicates a scene or event in the film. I'd forgotten I'd done that and assumed that I'd have to start from scratch in examining the film for center point construction. It seems that I don't, but I still have more work to do.

And that work is more focused because I'm tracking down a specific hypothesis, a hypothesis that guides me through the otherwise bewildering complexity that this film, or any other film, presents to the analyst. I'm now looking for a pattern whereas before I wasn't. I just noted things that seemed important.