Gestalt Switch in the Emergence of Human Culture

The Proceedings of the National Academy of Sciences has just published a collection of 18 articles on culture and cultural evolution: Sackler Colloquium on Extension of Biology Through Culture. The articles can be downloaded free. It looks like an excellent collection, including pieces on culture among animals (monkeys, apes, songbirds, whales, dolphins, insects) in addition to humans, with pieces on neuroscience, learning, childhood development, cognition, and language. The conception of culture that runs through the collection is generally known as gene-culture coevolution or dual inheritance theory, which is reviewed by Nicole Creanza, Oren Kolodny, and Marcus W. Feldman, Cultural evolutionary theory: How culture evolves and why it matters. I think of this as the ‘orthodox’ or ‘mainstream’ approach to cultural evolution.

I’ve not had time to read much of the collection, but I’ve looked at a few pieces. I was particularly struck by a passage in the introductory article, The extension of biology through culture, by Andrew Whiten, Francisco J. Ayala, Marcus W. Feldman, and Kevin N. Laland:

Research over the last half-century has led to the revelation that learning from others (social learning) is widespread in the animal kingdom and spans a great range of important functional contexts, including diet, feeding techniques, travel route selection, predator avoidance, vocal communication, migration, and mate and breeding site choices (26, 28). Hundreds of laboratory experimental studies have demonstrated social learning and transmission in a wide variety of animals. Social learning is now extensively documented in mammals (29), with a particular intensity of research studies in primates (30–33) and cetaceans (34–37), in birds (38–41), in fish (42), and in insects (43, 44). The fact that social learning has been shown to play important roles spanning multiple functional contexts (25–28) suggests that many animals are not simply acquiring one or a few behavioral patterns socially, but rather that social learning is central to their acquisition of adaptive behavior.

That explains why seven of the 18 articles are devoted to animal culture.

I’ve known about animal culture ever since I read about sweet-potato washing among macaque monkeys when I was an undergraduate in the mid-1960s. And then we have tool-making among chimpanzees–stripping twigs of leaves and using them to fish for termites; and of course birdsong. But I hadn’t realized that cultural behavior is so widespread among animals. Explaining the emergence of culture is one kind of problem is only humans have it, with perhaps a rare exception or two. But that doesn’t seem to be the case. So we have a different kind of problem. 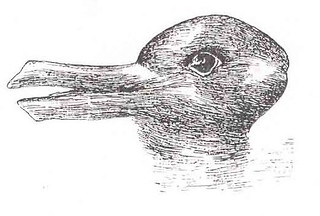 Is it a duck or a rabbit? The drawing will support either interpretation.

In the case of human culture I’m imagining a hominin that has quite a bit of culture, including the crafting of stone tools, and most likely some kind of proto-language and proto-music. And then something happens that reconfigures those mechanisms so that they function in a new way. That new way is fully human culture, homo sapiens sapiens. That something is, in effect, a gestalt switch.

Consider the following thought experiment, which I’ve developed more fully in UFO Events, a Thought Experiment about the Evolution of Language: We have this group of very clever hominins with rich pre-human culture. Intelligent creatures from another planet land among them and gift them with advanced (e.g. fully human) culture, training them for, say, one or two decades. The aliens then leave, but the advanced culture persists and is handed down from one generation to the next. The biological endowment of these creates has not changed, not in the small span of two decades, but they exhibit a new range of behaviors. The aliens were able to repurpose the old mechanisms to new ends and the switch has proven to be stable.

Of course I don’t believe that any such thing has happened. But whatever it is, it was something like that in the sense existing mechanisms would have somehow been reconfigured to perform a new function. What is that reconfiguration?

I don’t know. I suspect, though, that we might think of the result as being cumulative culture, which does seem to be unique to humans. The collection has two articles that address that: Dietrich Stout and Erin E. Hecht, Evolutionary neuroscience of cumulative culture, and Cristine H. Legare, Cumulative cultural learning: Development and diversity. I’ve taken a quick look through the first, but haven’t yet done even that much with the second. They address an interesting question: What is it that allows learned behavior to accumulate from one generation to the next? It’s the accumulation that’s special. It’s one thing to pass the same bit of learned behavior from one generation to the next. It’s another to that, AND THEN SOME. It’s the AND-THEN-SOME that’s the gestalt switch.

And this leads to another question: Is gene-culture co-evolution adequate to account for the AND-THEN-SOME? The name of this colloquium is telling, “The extension of biology...” Social learning is a biological mechanism, one that supports basic culture. But it alone is not sufficient to support cumulative, fully human, culture. Maybe gene-culture co-evolution theory is not adequate to account for fully human culture.

In the biological realm it is phenotypes that succeed or fail at life. Genes that contribute to successful phenotypes will remain in the gene pool while genes that contribute only to unsuccessful phenotypes will disappear from the gene pool. Gene-culture co-evolution adds nothing to that. The genetic endowment allows for social learning and for the limited transmission of learned behavior from one generation to the next.

I’m thinking that, while cumulative culture ultimately requires a genetic endowment sufficient to it (mostly, I’d guess, a large brain), it doesn’t require that endowment to get started. Given the appropriate behavioral substrate, it can get started without any change in genetic endowment. That’s our gestalt switch.

Most of what is unusual about man can be summed up in one word: ‘culture’. . . . Cultural transmission is analogous to genetic transmission in that, although basically conservative, it can give rise to a form of evolution. Geoffrey Chaucer could not hold a conversation with a modern Englishman, even though they are linked to each other by an unbroken chain of some twenty generations of Englishmen, each of whom could speak to his immediate neighbors in the chain as a son speaks to his father, Language seems to ‘evolve’ by non-genetic means, and at a rate which is orders of magnitude faster than genetic evolution.

He goes on to say that “As an enthusiastic Darwinian, I have been dissatisfied with explanations that my fellow-enthusiasts have offered for human behavior” (pp. 190-191), and he goes on to name group-selection and kin-selection, which are standard forms of sociobiological argumentation (though group-selection has a rather rocky history). “These ideas are plausible as far as they go, but I find that they do not begin to square up to the formidable challenge of explaining culture, cultural evolution, and the immense differences between human cultures around the world . . .” (p. 191). That is to say, those ideas do not pass muster in Dawkins’ phenomenological gut-check about what’s required to account for human culture. A new idea is needed.

I think that Dawkins is right about this, though his suggestion, the meme, was not well-formulated and has since been trivialized. The emergence of cumulative culture requires that culture become an evolutionary domain unto itself.

I realize that this is rather vague, and I could keep on going, but I think I need to let it rest for a moment and do a bit more thinking.

[For an idea of where I want to go with this see the note, Cumulative culture in the reticulum, in this post. And here's some more considered remarks, including some on Dawkins.]