Yesterday day New Savanna had over 10,000 page views and already has almost 5,000 as of 7Am this morning: 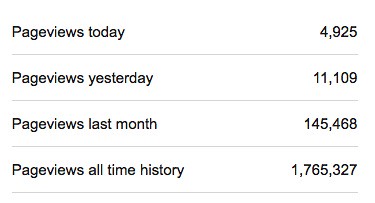 Until roughly the beginning of the year I got between 400 and 1000 hits per day, with occasional spikes above that, and then:

Here's the graph for last week:

The recent up-tick is quite visible. Is it just a transient spike or something more permanent? I'd guess it's the former, but I don't know.

Note also that the page views are fairly periodic. That makes sense, as relatively few people would by causing the web at night.

However, the web wraps around the world. If my viewers were evenly distributed around the globe, then you wouldn't see that periodicity. When people are awake in Japan and cursing the web, they'd be asleep on the East Coast of America, and vice versa. This map and chart confirms that my viewers are overwhelmingly from America: 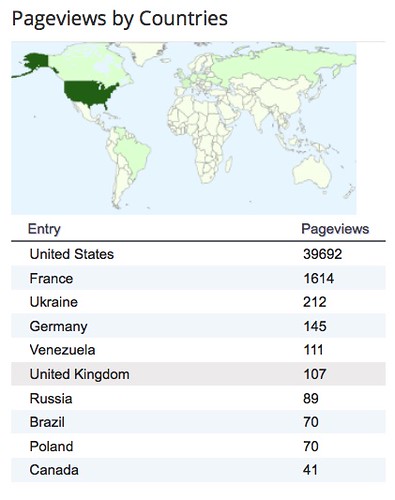 There is, however, a puzzle. According to this article in Wikipedia, Chrome is by far the most popular browser in the world, with Firefox a distant second. This shows all-time stats for browsers cruising New Savanna:

And this shows the stats for last week:

Why the preference for Firefox over Chrome?

Finally, what are people looking at? When I look at hits for individual posts it seems that most of the increase goes to photographs. That, of course, is pleasing. But I didn't start New Savanna to post photos–there's more of them at Flickr. I started it to discuss my intellectual work.