What’s on my plate. I ramble through NCIS, cultural evolution, description, #DH, and plot another article. [Ramble 5]

I’ve got a number of posts planned for the near future, perhaps even the very near future. But I’m not sure in just what order I’ll be writing them. Here’s (some of) what I’m currently thinking about.

NCIS, boundary issues: terrorism, sexual harassment, and rambling on: As I mentioned in this post, I’ve been watching a lot of NCIS and wondering why it’s perhaps the most popular show on network TV. It came on the air not too long after 9/11 and a good many shows are about terrorists; I don’t have a count, but let’s say it’s a third of them. That’s part of the appeal. One of the central characters, Sennior Special Agent Anthony DiNozzo, is a bit of a bully, wise guy, and sexual harasser. He’s real prick, but good at heart (of course). And the three characters who are more or less intellectual – the medical examiner, the forensic specialist, and another Special Agent – tend to ramble on about technical matters. I’m thinking these are all about more or less the same thing, boundary violations, and that’s part of the show’s appeal. How do we restore those boundaries?

Cumulative culture in the reticulum: This is a follow up to my post, Gestalt Switch in the Emergence of Human Culture. I’m not quite sure just where I’m going with this, but I do want to link up with some of my other thinking on cultural evolution. In particular, I want to connect with my concept of the cultural reticular, which I currently define as:

Reticulum or cultural reticulum: A network of persons and other cultural actors, whether animate or inanimate, that are linked together in a social group at the neural level. A reticulum in this sense is a Latourian actor-network. It is the environment in which cultural beings evolve and to which they must adapt. The actors in a reticulum are covered or painted with coordinators. Formerly mesh, which I may still use informally.


And here's a more considered remark on cumulative culture, including some comments on Dawkins.

But now I’m starting to write the post. Whatever the formulation, this is to be contrasted with explanation, which is about mechanisms (broadly and loosely understood) operating in and through the text.

How do humanists understand computational criticism (aka ‘distant reading’)? Computational criticism is quite technical, involving statistics and high-dimensional spaces, among other things, to make ‘observations’ about texts. And one needs to think like a social scientist to relate these observations to literary history. Literary critics are not ordinarily trained in these things. I’m particularly concerned about the technical issues.


You don’t need to understand the math in order to use any of the various analytic packages and I’m sure some critics do just that. But if you do this, how do you understand your results? What are your intuitions about them? Other critics, I’m sure, do understand the math, to some extent or another. But in general I can’t tell how just how much math a given critic has under their belt just by reading their criticism.

Note: My technical math skills are weak, but over the years I’ve developed relatively sophisticated intuitions. But I’ve also got a very sophisticated sense of how language operates and this is grounded in my technical knowledge of cognitive semantics.

Description and Form in Literary Analysis: The Case of Heart of Darkness: This is a working title for an article I’m thinking about submitting to the formal academic literature. I’ve done a lot of work on Heart of Darkness, description, and form. This is not a blog post (obviously), but I can write future posts with this in mind.

Why Heart of Darkness? Because I can lead off with this: 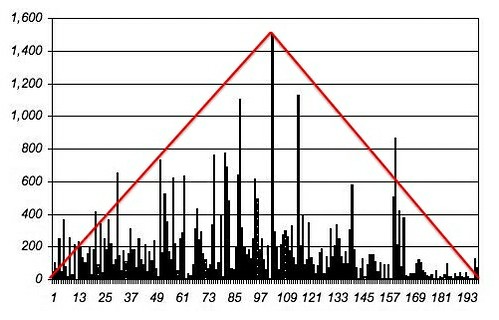 That chart depicts paragraph lengths in the text. It is descriptive in character, though not verbal, and is about form, not meaning. Moreover it depicts a fact about the text. For one facet of my argument will be to counter the casual and pervasive notion that “it’s interpretation all the way down.” No, it’s not. Objectivity is possible, and we can get it through the description of form.