Reality is not perceived, it is enacted

Reality is not perceived, it is enacted – in a universe of great, perhaps unbounded, complexity.

David Hays and I published that in a little article, we called it a note, we published over thirty years ago (see below). It was Hays’s formulation, but I liked it then. And I still like it?

But what does it mean? Forget the stuff after the dash, it’s that first part I’m thinking about. It clearly implies that without actors there’s no reality. Since we humans are the actors does that mean that before us, there was no reality? That’s absurd. The earth and the universe existed before we did, no?

Yes. Perhaps it means that they weren’t real. You mean they were imaginary, or illusions? No, more like the difference between the real and the not-real had no meaning.

That seems a little better. Let’s try something else. Let’s go the Latour route and say that everything is an actor, not just us humans. That leaves plenty of actors to enact reality prior to us.

It seems to me that we’re haunted by an old picture that we might as well attribute to Descartes, though it’s likely older. In this picture we are over here and the (external) world is way way over there somewhere. Our problem is to figure out what that’s like. How do we do that? By perception. 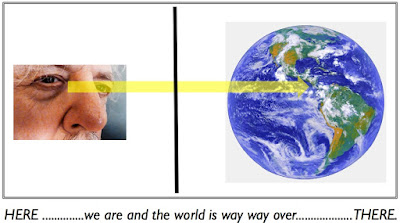 But that’s never really worked out. There’s always the problem of figuring out whether or not perception really matches the world. It never does or, what amounts to the same thing, there’s no place where we can stand to verify the match. The only way out of that bottle is to stop playing that game. We drop the convention of assigning agency only to humans and all the creatures get to enact reality.

We still have to verify our perceptions and theories, etc. But we accept that they’re always going to be provisional. But as long as we can use them to act effectively in the world, we’re OK.

Let’s consider a very different example, “The Rite of Spring” from Disney’s 1941 Fantasia. It depicts an enactment of the solar system and the earth prior to human habitation. It’s certainly not a perception. You can call it an artistic imagining, with considerable license taken, if you will – for example, the T. Rex and the Stegosaurus couldn’t have fought because they lived a hundred million years apart (and Disney knew that). But that’s an action, no? Yes. Disney isn’t doing science, though it obviously interests him a great deal in this episode. He’s doing art.

Science and art are two different ways of enacting reality. Two different modes. Which brings us back to Latour again, who has advanced a theory of modes. Note, however, that I have decided to take a somewhat different view of modes and have offered a preliminary sketch: Living with Abundance in a Pluralist Cosmos: Some Metaphysical Sketches, Working Paper, January 2013,
https://www.academia.edu/4066568/Living_with_Abundance_in_a_Pluralist_Cosmos_Some_Metaphysical_Sketches.

I could go on and on, and probably should. But not now. Later. Meanwhile here’s the paper where Hays and I offered that formulation along with the immediate context.

William Benzon and David G. Hays, A Note on Why Natural Selection Leads to Complexity, Journal of Social and Biological Structures 13: 33-40, 1990, https://www.academia.edu/8488872/A_Note_on_Why_Natural_Selection_Leads_to_Complexity.

We open the paper by noting that at least some thinkers have observed that, over the long run, “natural selection tends to deliver larger and more complex species.” Why? A bit later:

One could imagine a universe in which successive adaptations do not become more complex. What we need is a clear statement of why our universe is not that imagined universe.

The answer that we propose requires no new physical principles or mechanisms. Our proposal is essentially an exercise in conceptual clarification. The necessary clues come from the work of a perceptual psychologist, J. J. Gibson, who considered his theory ecological, and from the theory of computation.

We then present Gibson:

Gibson's ecological psychology is grounded in the assertion that we cannot understand how perception works without understanding the structure of the environment in which the perceptual system must operate. In the context of his analysis of visual perception (1979) Gibson addressed an issue formulated most poignantly by Rene Descartes in his Meditations on First Philosophy (1641): How do I distinguish between a valid perception and an illusory image, such as a dream? The difference, Gibson (1979:256-257) tells us, between mere image and reality is that, upon repeated examination, reality shows us something new, whereas images only reiterate what we have seen before.

A surface is seen with more or less definition as the accommodation of the lens changes; an image is not. A surface becomes clearer when fixated; an image does not. A surface can be scanned; an image cannot. When the eyes converge on an object in the world, the sensation of crossed diplopia disappears, and when the eyes diverge, the “double image” reappears; this does not happen for an image in the space of the mind.... No image can be scrutinized – not an afterimage, not a so-called eidetic image, not the image in a dream, and not even a hallucination. An imaginary object can undergo an imaginary scrutiny, no doubt, but you are not going to discover a new and surprising feature of the object this way.

Gibson presupposes an organism which is actively examining its environment for useful information. It can lift, touch, turn, taste, tear and otherwise manipulate the object so that its parts and qualities are exposed to many sensory channels. Under such treatment reality continually shows new faces. Dream, on the other hand, simply collapses. Dream objects are not indefinitely rich. They may change bafflingly into other objects, but in themselves they are finite.

With this simple remark, Gibson answered not only Descartes's question but also the first question in epistemology. If we want to assure ourselves of the reliability of our knowledge of the universe, we must first assure ourselves that we are observing it. Descartes realized that percepts do not contain within themselves markers indicating where they came from. If the percept is all you have, where can you find such a marker? Gibson suggests that the search for a marker is beside the point, in the same way that Alexander's solution to the Gordian knot problem made it clear that untying it won't work. Gibson's answer is like Alexander's sword, in that it rejects the stipulated terms of the problem. Reality is in the eye of the beholder, or more precisely, in the eye-hand coordination of the active observer. Therefore the answer has to be found in the actions available to the observer.

Reality is not perceived, it is enacted – in a universe of great, perhaps unbounded, complexity.

Now, it follows immediately that the more capable observer can obtain more knowledge of the universe. To repeat the same acts of manipulation and observation gains nothing; to do justice to the universe's unlimited capacity to surprise, the observer needs a large repertoire of manipulative techniques and perceptual channels. Indeed, nothing assures us that we, with elaborate technology for experiment and observation, have exhausted nature's store of surprises. After billions of years of biological evolution, thousands of years of cultural evolution, and centuries of scientific and technical cumulation, we can still hope to add to our capability and learn about new kinds of phenomena.