Relational Nets Over Attractors, A Primer: Part 1, Design for a Mind 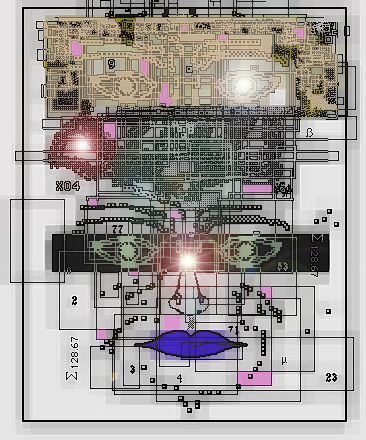 Abstract: Miriam Yevick’s 1975 holographic logic suggests we need both symbols and networks to model the mind. I explore that premise by adapting Sydney Lamb’s relational network notation to represent a logical structure over basins of attraction in a collection of attractor landscapes, each belonging to a different neurofunctional area (NFA) of the cortex. Peter Gärdenfors provides the idea of a conceptual space, a low dimensional projection of the high-dimensional phase space of a NFA. Vygotsky’s account of language acquisition and internalization is used to show how the mind is indexed. We then define a MIND as a relational network of logic gates over the attractor landscape of a neural network loosely partitioned into many NFAs. An INDEXED MIND consists of a GENERAL network and an INDEXING network adjacent to and recursively linked to it. A NATURAL MIND is one where the substrate is the nervous system of a living animal. An ARTIFICIAL MIND is one where the substrate is inanimate matter engineered by humans to be a mind; it becomes AUTONOMOUS when it is able to purchase its compute with services rendered.

Preface: Notation as Speculative Engineering 2
1. How it Began: Symbols, Holograms, and Diagrams 3
2. A Semantic Net vs. A Relational Network over Attractors 12
3. Simple Animals, Attractor Landscapes, and Lamb’s Notation 18
4. Some Basic Constructions 27
5. Language, Inner Speech, and Thought 38
6. Kinds of Minds 49
Coda: Topics for Further Exploration 62
Appendix: The Idea in 14 Statements 67
References 69

I write this paper as a kind of philosopher, a speculative engineer. I am an engineer because I am curious about how to design and build things. I speculate because that is the only way to enact what I attempt in this paper. W. Ross Ashby wrote Design for a Brain. I write in that spirit, but my topic is a bit different: design for a mind.

I propose a diagrammatic notation convention as a crucial design tool. It is a convention that relates patches of cortical tissue with a classical model derived from mid-century computational lingistics. My aim is to provide a way of thinking about how a meshwork of neurons can give rise to symbolic thought. Think of the notation as a collection of Lego pieces for a mind.

As such it is a simplification, an idealization. I have had to leave much out of account. Setting aside the things I do not know, and the things I’d don’t know that I do not know, incorporating all that I do know – not to mention things I but know about, more or less, would have made it impossible for me to do much of anything at all. Organization is the problem, gathering these many and various things, these ideas, facts, models, observations, what have you, gathering them together and laying them out in a coherent order, that is the problem.

It is my belief that by pushing through, if not to completion, at least to some kind of closure is the best way bring order to this material. Get it one place where we can see and examine it. Then and only then does it make sense to ferret out the many things I have missed or gotten wrong. In this case, closure means an explicit definition of what a mind is. That in turn leads to definitions of artificial and natural minds, and autonomous artificial minds.

Are those definitions correct? They may be useful without being correct. They are best thought of as being provisional, a means to deeper conceputalization and more refined definitions. The only way to measure their limitations is to try them out and see what becomes visible.

Appendix: The Idea in 14 Statements

1. I assume that the cortex is organized into NeuroFunctional Areas (NFAs), each of which has its own characteristic pattern of inputs and outputs. It does not appear that NFAs are sharply distinct from one another. Their boundaries can be revised – think of cerebral plasticity.

2. I assume that the operations of each NFA are those of complex dynamics. I have been influenced by Walter Freeman (1999, 2000) in this.

3. A low dimensional projection of each the phase space for each NFA can be modeled by a conceptual space as outlined by Peter Gärdenfors.

5. Interaction between NFAs can be approximated by a Relational Network over Attractors (RNA), which is a relational network defined over basins in multiple linked attractor landscapes.

6. The RNA network employs a notation developed by Sydney Lamb (1961) in which the nodes are logical operators, AND & OR, while ‘content’ of the network is carried on the arcs.

7. Each arc corresponds to a basin of attraction in some attractor landscape.

8. The output of a source NFA is ‘governed’ by an OR relationship (actually exclusive OR, XOR) over its basins. Only one basin can be active at a time. [Provision needs to be made for the situation in which no basin is entered.]

9. Inputs to a basin in a target NFA are regulated by an AND relationship over outputs from source NFAs.

10. Symbolic computation arises with the advent of language. It adds new primary attractor landscapes (for phonetics & phonology, and morphology) and extends the existing RNA. The overall RNA is roughly divided into a general network and a lingistic network.

11. Word forms (signifiers) exist as basins in the linguistic network. A word form whose meaning is given by physical phenomena are coupled with an attractor basin (signifier) in the general network. This linkage yields a symbol (or sign). Word forms are said to index the general RNA.

12. Not all word forms are directly defined in that way. Some are defined by cognitive metaphor (Lakoff and Johnson 1981). Others are defined by metalingual definition (David Hays 1972). I assume there are other forms of definition as well (see e.g. Benzon and Hays 1990). It is not clear to me how we are to handle these forms.

14. The common-sense concept of thinking refers to the process by which one uses indices to move through the general RNA to 1) add new attractors to some landscape, and 2) construct new patterns over attractors, new one or existing ones.