It is not clear to me just what Marcus thinks about this. At the beginning of chapter 6 of The Algebraic Mind[1], which is, I believe, his major theoretical statement, Marcus says (p. 143): “The suggestion that I consider in this chapter is that the machinery of symbol-manipulation is included in the set of things that are initially available to the child, prior to experience with the external world.” Later on he will reject the “idea that the DNA could specify a point-by-point wiring diagram for the human brain” (p. 156). After weaving his way through a mind-boggling network of evidence about development, Marcus offers (p. 165):

Genetically driven mechanisms (such as the cascades described above) could, in tandem with activity-dependence, lead to the construction of the machinery of symbol-manipulation—without in any way depending on learning, allowing a reconciliation of nativism with developmental flexibility.

At this point I’m afraid I’m driven to echo the great Roberto Duran and to say “no más”. It makes my head hurt.

As I suggested in chapter 6, differences between the cognition of humans and other primates may lie not so much in the basic-level components but in how those components are interconnected. To understand human cognition, we need to understand how basic computational components are integrated into more complex devices—such as parsers, language acquisition devices, modules for recognizing objects, and so forth—and we need to understand how our knowledge is structured, what sorts of basic conceptual distinctions we represent, and so forth.

I agree with Marcus on that first sentence. I’m not so sure about some of the rest, though I do believe that last remark, after “so forth.” That structure what most of the primer is about.

Now, the word “modules” is most important in an intellectual tradition of which I’m skeptical. If by parser Marcus means the sorts of things that are the staple of classical computational linguistics, then I doubt that human brains have such things. That’s not an argument, and this isn’t the place to make one, but I will point out that, from its origins in the problem of machine translation in the 1950s until well into the 1970s, computational linguistics had little to no semantics to speak of – nor, for that matter, has it ever developed more than a smattering of semantics. Without semantics, syntax is what is left. If syntax is what you have, then you need a sophisticated and elaborate parser. I believe that human language is grounded in semantics, which is in turn grounded in perception and action, and that syntax supports semantics. Relatively little parsing, as such, is required.

As for the language acquisition device, we have already seen that Marcus believes symbol manipulation is available to children “prior to experience with the external world.” I certainly do not believe that the mind is a proverbial blank state. Infants do come into the world with some fairly specific perceptual and behavioral equipment. But whether or not that includes a language acquisition device, well, let me evade the issue by spining a tale.

This is a tale, not a true one, but a thought experiment. I invented it while thinking about the origins of language. I came up with this tale while thinking about various early attempts that had been made to teach chimpanzees language. All of them ended in failure [2]. In the most intense of these efforts, Keith and Cathy Hayes raised a baby chimp in their household from 1947 to 1954. But that close and sustained interaction with Vicki, the young chimp in question, was not sufficient.

Then in the late 1960s Allen and Beatrice Gardner began training a chimp, Washoe, in Ameslan, a sign language used among the deaf. This effort was far more successful. Within three years Washoe had a vocabulary of Ameslan 85 signs and she sometimes created signs of her own.

The results startled the scientific community and precipitated both more research along similar lines — as well as work where chimps communicated by pressing iconically identified buttons on a computerized panel — and considerable controversy over whether or not ape language was REAL language. That controversy is of little direct interest to me, though I certainly favor the view that this interesting behavior is not really language. What is interesting is the fact that these various chimps managed even the modest language that they did.

The string of earlier failures had led to a cessation of attempts. It seemed impossible to teach language to apes. It would seem that they just didn’t have the capacity. Upon reflection, however, the research community came to suspect that the problem might have more to do with vocal control than with central cognitive capacity. And so the Gardners acted on that supposition and succeeded where others had failed. It turns out that whatever chimpanzee cognitive capacity was, it was capable of orchestrating surprising behavior.

Note that nothing had changed about the chimpanzees. Those that learned some Ameslan signs, and those that learned to press buttons on a panel, were of the same species as those that had earlier failed to learn to speak. What had changed was the environment. The (researchers in the) environment no longer asked for vocalizations. The environment asked for gestures, or button presses. These the chimps could provide, thereby allowing them to communicate with the (researchers in the) environment in a new way.

It seemed to me that this provided a way to attack the problem of language origins from a slightly different angle.

How Aliens From Outer Space Brought Us Language

I imagined that a long time ago groups of very clever apes – more so than any extant species – were living on the African savannas. One day some flying saucers appeared in the sky and landed. The extra-terrestrials who emerged were extraordinarily adept at interacting with those apes and were entirely benevolent in their actions. These space aliens taught the apes how to sing and dance and talk and tell stories, and so forth. Then, after thirty years or so, the ETs left without a trace. The apes had absorbed the extra-terrestrials’ lessons so well that they were able to pass them on to their progeny generation after generation. Thus human culture and history were born.

Now, unless you actually believe in UFOs, and in the benevolence of their crews, this little fantasy does not seem very promising, for it is a fantasy about things that certainly never happened. But if it had happened, it does seem to remove the mystery from language’s origins. Instead of something from nothing we have language handed to us on a platter. We learned it from some other folks, perhaps they were short little fellows with green skin, or perhaps they were the more modern style of aliens with pale complexions, catlike pupils in almond eyes and elongated heads. This story hasn’t taught as anything new about just how language works, but one source of mystery has disappeared.

But, and here is where we get to the heart of the matter, what would have to have been true in order for this to have worked? Just as the chimps before Ameslan were genetically the same as those after, so the clever apes before alien-instruction were the same as the proto-humans after. The species has not changed, the genome is the same – at least for the initial generation. The capacity for language would have to have been inherent in the brains of those clever apes. All the aliens did was activate that capacity. Once that happened the newly emergent proto-humans were able to sustain and further develop language on their own. Thus the critical event is something that precipitates a reconfiguration of existing capabilities, a Gestalt switch. The rabbit has become a duck, or vice versa, the crone a young lady, or vice versa. 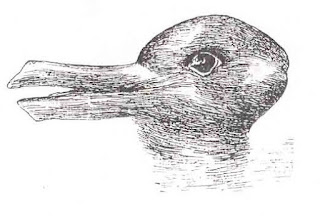 However, we’re not interested in the phylogenetic origins of language, we’re interested in how children acquire it. Whatever their genetic endowment, they live in a world surrounded by language speakers, and some of them are closely attuned to the infant’s needs, desires, and evoling capacities. It’s not clear to me just what specialized language acquisition device the infant needs.