Is Academia Eating Its Young?

Bumped to the top of the queue from a decade ago on general principle. Nothing's changed on this except that other social media have displaced blogging. The pandemic has killed off some of the weaker schools and hastened the transition to forms of distant learning. Permatemping is still a scandal. 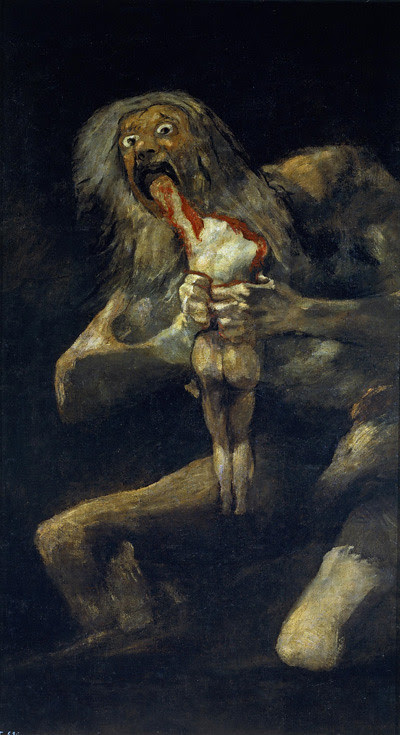 The fate of bloggers has been a matter of some interest in the academic blogosphere. Not bloggers in general, but graduate students and junior faculty. The concern is not just that no professional credit accrues for blogging, but that blogging may actually hurt one’s career. It is a fact that many (older) faculty are, at best, ignorant of and indifferent to, online activity of all sorts, including blogging. Some – many? – are actively hostile to it.
This issue came to my attention most recently though a discussion at Arcade, a humanities site sponsored by Stanford. Arcade includes a group blog where a wide range of humanists have blogging rights. This particular issue was not the central focus of the discussion – which was about the anxieties attendant upon thinking in public and, by the way, why aren’t people posting as much anymore? – but it did come up.
In thinking about the issue I was struck by one thought: it’s pointless to try legitimating blogging in the current academic world. Of course I think blogging is a valid intellectual pursuit,; that’s not an issue. The current academic world is too far gone to be able to accommodate blogging in a robust way. Just why I think that would require some explaining, which I don’t want to at the moment. Let’s just say that I’ve been deeply skeptical about academic institutions for some time, and this is just another reason to despair of them.
And that leads me to this question: Is the academic world eating it’s young? And if so, how can it survive?
I believe the answer to the first question is “Yes.” And the answer to the second question must therefore be, “No, it cannot survive. Not in its present form.”
On the first point, it’s long been common wisdom that graduate students and junior faculty must curb their creativity and get with the program so they can obtain, first, a tenure-track appointment, and then tenure itself. But, if you’ve been holding back during what may be the most creative period in your intellectual life, will you be able to open it up once you’ve gotten tenure, or will you have forgotten how? And, it’s not as though having tenure brings you home free. There are still many lines to toe, many hoops to jump. I take the case of Mark Changizi as an index of the current state of affairs. He’s one of the most brilliant and creative psychologists of his generation, but has chosen to abandon the academic ship because it didn’t give him room to think deep thoughts.
Then there is the scandal of permatemping, using graduate students and poorly paid adjuncts to teach the bulk of undergraduate courses. Not only does this make research impossible – and research has never been of primary interest to more than a small number of academics – but it makes good teaching difficult to impossible. How can you do a good job if you’re teaching five courses at a time, spread over two campuses? You can’t. All you can do is hang on and hope your spouse has good health coverage.
No, the current system cannot survive, not when the structure of the institution forces older faculty to grind the younger faculty into hamburger. At the same time there’s the pressure from the on-line for-profit world. Those institutions have their own problems, but they’re here to stay. They’ll continue to siphon students away from more traditional institutions, and those traditional institutions will offer more and more online instruction, taught by graduate students and adjuncts.
Many schools will survive, in some form. But the system as it currently exists is dying. It cannot be saved. The best that can be hoped for is that some gifted people at some institutions will be able take hold of change and do something interesting. I see precious little of that on the horizon.