Presidential Politics 2016: The Real, the Ritual, and Beyond the Pale – A Report from Mars (@ 3QD)

Well, not exactly. But it’s that strange, really it is. Anyhow, I’ve got an essay about it over at 3 Quarks Daily: Prelude and Exordium to the Ordination, Coronation, Inauguration, and Installation of the Grand High Singularity, Donald of Trump, Ruler of Universes Known, Unknown, Unimaginable and Phantasmagoric.

Title, of course, is ridiculous, which is the point. I figure I worked on it off and on for an hour or so, picking words, moving them around. It was only late in the process that I decided to use “singularity,” and it took a bit of manouvering to slip it in. Still, I slipped. It should have been “Lord High Singularity” rather than “Grand High Singularity.”

What can I say? You win some, you lose some.

The essay itself took 5 or 6 hours, along with two tumblers of scotch. Some of the prose – the middle section, about The Crown – had already been written. And I’d been thinking about it, of course, for weeks. Alas, it could use more work. Like, maybe I should have written 10K words and then extracted the essay from that.

The problem, of course, is I don’t know what to think about this event. Neither does anyone else. Of course, everyone’s saying this and that because they have to. Maybe eventually we’ll get a handle on it. Maybe.

But what if events unfold more rapidly than we construct categories to make sense of them? The old categories no longer work – and that’s where most of the explication and punditry is going these days, the existing, the old categories – but we don’t have time to construct new ones. We don’t even know that’s what we need to do. Maybe that’s what I meant by singularity. For better of worse we’re never going to catch up.
But have we ever, caught up I mean?

Meanwhile I’ve been wondering if the reign of King Trump were a Shakespeare play, which one would it be? Perhaps King Lear. I know, it’s a great play and Trump’s a power-mad buffoon. But then Lear was rather foolish and gullible, wasn’t he? He actually gathered his children together and asked which loved him most. Frankly, sounds like something Trump might do. Sounds like something he is, in effect, doing all the freakin’ time: Do you love me? – to his kids, his staff, his entourage, the world – Do you love me? Perhaps for a few of them, yes – even more than a few (I’m thinking of those who voted for him, but have never had to deal with him day after day). For most of them, though, they want to use him. But he knows that, as did Lear. Hence the no win lose lose questions.

Will the reign of The Donald Supreme be a think of Shakespearean tragedy, or Marxist farce? Only time will tell.

What will happen with his businesses? He clearly wants to keep his hand in. I can appreciate that. And unwinding his connections to his businesses would be a tough one, but then he should have thought of that when he decided to run. Except, of course, he didn’t really think he’d win, did he? He may never had said to himself, I’m doing it for the fame and the brand; he would have kept that hidden. Nor did he ever think about actually governing, the day-to-day, the long-term strategy. He just ran, ran to see if he could beat those other chumps.

He did. Now he’s stuck with it. And the White House just doesn’t have enough bling for his taste. He doesn’t really want to leave friends and family in New York. And the meetings. Oh, the meetings. And being in the press all the time. PR is PR but this is ridiculous.

OTOH, something might come of his midnight tweeting. Yes, it’s absurd, but also kind of interesting – here I’m thinking in terms of myth, symbol, and ritual. Donald Trump, Tweeter in Chief. That might amount to something. Evolution. In the old days rulers could fight battles by proxy. Each chooses a champion and the champions fight it out. Now its Tweet against Tweet.

I’m thinking there’s some kind of reality media thing here. Not TV. The web. Yes, the tweet streams, by all means. But with graphic interpretation, amplification, and explication: 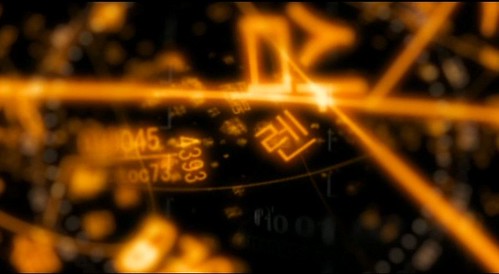 Viewers vote on the winner. Obviously a lot depends on the graphics teams.

Frame grabs from (top to bottom): Ghost in the Shell 2: Innocence, Animatrix: Matriculated, The Matrix, Tron.