The evolution of agriculture from 10 kya and into the future

Abstract: Since its emergence around 12,000 years ago, agriculture has transformed our species, other species, and the planet on which we all live. Here we argue that the emergence and impact of agriculture can be understood within new theoretical frameworks developing within the evolutionary human sciences. First, the improvement and diversification of agricultural knowledge, practices, and technology is a case of cumulative cultural evolution, with successive modifications accumulated over multiple generations to exceed what any single person could create alone. We discuss how the factors that permit, facilitate, and hinder cumulative cultural evolution might apply to agriculture. Second, agriculture is a prime example of gene-culture co-evolution, where culturally transmitted agricultural practices generate novel selection pressures for genetic evolution. While this point has traditionally been made for the human genome, we expand the concept to include genetic changes in domesticated plants and animals, both via traditional breeding and molecular breeding. Third, agriculture is a powerful niche-constructing activity that has extensively transformed the abiotic, biotic, and social environments. We examine how agricultural knowledge and practice shapes, and are shaped by, social norms and attitudes. We discuss recent biotechnology and associated molecular breeding techniques and present several case studies, including golden rice and stress resistance. Overall, we propose new insights into the co-evolution of human culture and plant genes and the unprecedented contribution of agricultural activities to the construction of unique agriculture-driven anthropogenic biomes.

Here is Figure 2, along with it's caption: 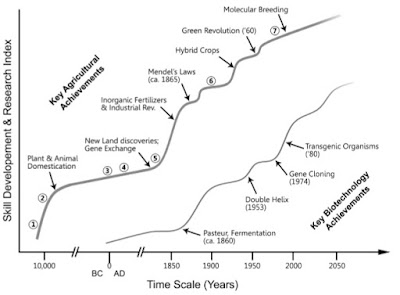 Key evolutionary events in agriculture and general biotechnology. Schematic illustration of cultural evolution of the major agricultural niches and sub-niches and accompanying technological and biotechnological innovations are depicted (bold line) as a relative skills and research index vs. the timeline (from the accepted start of agriculture, domestication, to present). The parallel evolution of general key biotechnological events is also depicted (standard line). Several major events in agricultural evolution are indicated with arrows pointing to the approximate time. The resulting major agricultural sub-niches are indicated in a series of encircled bold numbers above the timeline (1 to 7), at the approximately corresponding period: initial plant domestication resulted in small-scale horticultural food production (1); With further domestication, large-scale agricultural food production took place as a result of trial-and-error plant trait selection and agronomic improvements (2); As excess quantities of food became more available, people started to extend the shelf life of fresh food by preservation via drying, salting, smoking and other technologies, some of which were practised already by hunters-gatherers (3) and by fermentation (Nummer 2002) (4); Three key events further enhanced food quantity and quality from the thirteenth century (5): (a) long distance travelling and discoveries of new countries resulted in imports and exports of new plants between countries, which allowed for new gene combinations, global gene exchange and domestication of new species, (b) introduction of agricultural machinery during the industrial revolution, foremost the steel plough, cotton gin, seed drills, and later tractors as well as (c) chemical synthesis of ammonia that resulted in massive use of nitrogen fertilizers and large increase in crop production (Erisman et al. 2008). Discovery of Mendel’s laws of genetics and its rediscovery later, allowing revolutionary intentional science-based traditional breeding (Hallauer 2011) (6). This was followed by molecular breeding using genetic engineering, and more recently by genome editing. (7)

In terms of the cultural ranks theory developed by me and David Hays, the line 1-2 is the rise  of Rank 2 agriculture while developments 3, 4 & 5 are within Rank 2. At that point we start moving into Rank 3, which is achieved with Inorganic Fertilizers and Industrial Revolution. Rank 4 at 6.

Note that as far as I can tell, those curves are informal and don't actually track any measured quantities. They are illustrative.