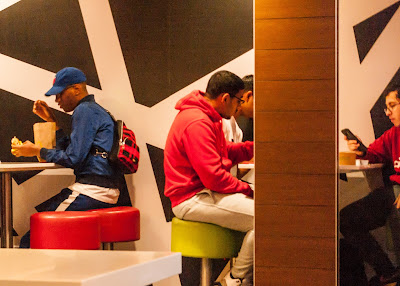 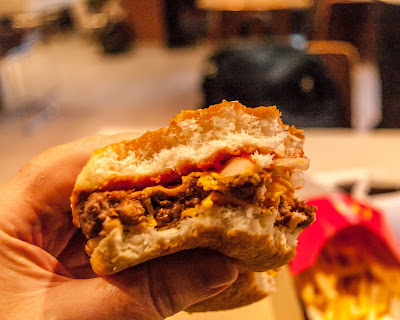 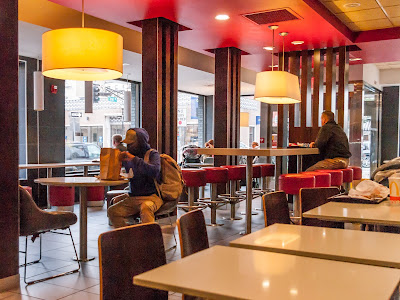 
A note added later: I really like that first photograph. One might observe that it's badly framed, what with that partition running through it on the right and with most of that one fellow being cut off at the right edge, leaving only a slice. But I like that. And I like the diagonal lines along the wall, which give the photo a feeling of motion even as we see four people sitting and eating lunch. It all works together to give a sense of dynamic calm.

Not, mind you, that I had anything like that in mind when I shot the photo. I didn't think two seconds about it, didn't even pause to get just that off-key framing. I just pointed the camera and clicked the shutter. That's the third of three room shots I took at 11:11 AM on Thursday, October 3 (I haven't rendered the other two). That is, I took them so quickly that the camera recorded them as happening within the same minute. Then, judging by the data, I went back to eating for four minutes and then snapped a burger shot, a fries shot,  then two tray shots, another burger shot (that's the one you see in the middle), and two more room shots, all at 11:15 AM. The last of those room shots is third one you see.