This gets a bump because it's music and kids time on New Savanna. Also, check out Cece's Drum Lesson. 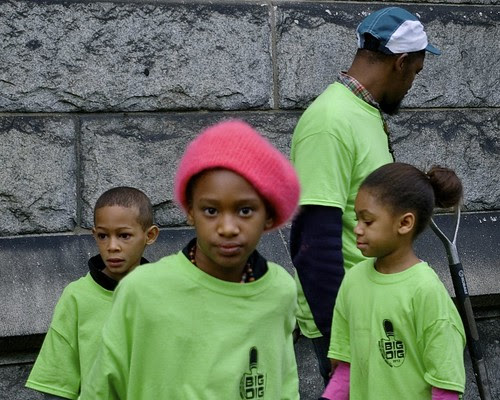 That’s Cece looking straight at the camera. The photo was taken a year ago, when she was eight. That’s her dad, Wymie, with his head turned.

It wasn’t quite Cece’s jam. But it wasn’t not her jam, either. Let me explain. 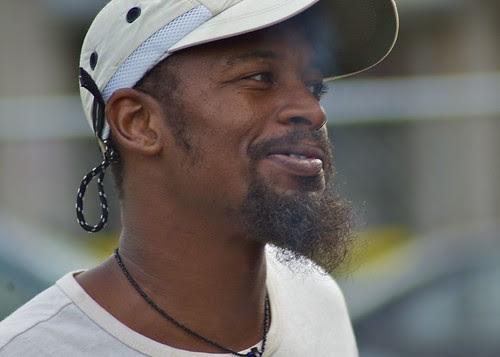 He’s a local musician. He’d called a rehearsal for Sunday’s gig at Grace Church. We were gonna’ do “Grandma Got Run Over by a Reindeer” and “The Christmas Song.” Which we’d never played before. Heck, we’d never even played together, not all of us – Wymie, vocals; Wendelin, spoken word and percussion; Greg, guitar; Mitch, drums; and me, trumpet and flugelhorn. And Cece, who was along just to check out the scene.

So we had some work to do. First up, “The Christmas Song,” sometimes known as “Chestnuts Roasting on an Open Fire”, which Nat King Cole recorded four times between 1946 and 1961. Not only had we not played this song together, I seemed to be the only one really familiar with the musical idiom, at least as a player, and so I had to guide things along.


Which I wasn’t terribly good at. You see, I can play the tune, and I can jam on it; but, while I know about chords, and have written changes for tunes of my own, I don’t know the names of the chord changes for this particular tune. I couldn’t tell Greg, the guitar player what to do and when to do it, much less help him with voicing. So he had to figure it out from a chord chart he found online, plus listening to a recording played on a smart phone hooked up to the stereo in the rehearsal studio. At the most basic level, though, I explained that this was a 32-bar AABA standard, and that the B section is called the bridge (some musicians call it the channel). And then there’s the fact that the A section has two different endings, and Greg was having trouble figuring out that second ending.

Anyhow, we worked our way through it, and then opened up the arrangement so Wendelin could do the spoken-word piece that she’d written while the rest of use were trying to find one another through the song. Wymie figured out that on the last time through the A section he could go up above the melody, in effect singing high harmony to a virtual Nat King Cole on the melody. Very Nice.

And Cece was sitting beside me on the couch, writing a rap in a notebook;  more or less taking it all in; and probably thinking some nine-year-old thoughts about “what ARE these grown-ups trying to do?” Good question.

Somehow or other, I don’t know quite how it happened, but let’s say that Cece started rapping into the mike. And Wymie started rapping with and back at her, face-to-face, about eight or nine feet apart, father to daughter to father and around we go. Mitch laid down a medium funk groove on the drums, Greg came in on guitar, and Wendelin came in on shaker or tambourine – I forget which, and it doesn’t matter, because she alternated between them. I noodled some short late-period Miles Davis lines on trumpet.

And we were off. The whole thing revolved around the father-daughter axis, which means that it really revolved around the daughter, Cece. Hence, Cece’s jam. We went on for half an hour, forty-five minutes, non-stop. Not bad for a nine-year-old bandleader.

We started out in Hoboken, where the rehearsal studio is located. Then we headed south through Jersey City and Bayonne (where Cece lives) and then northwest to the Great Lakes, down the Mississippi to New Orleans – gotta check out the birthplace of jazz, and out to the Caribbean, Puerto Rico and the Dominican Republic. At about that time the Mother Ship had found us and we jetted out to Venus, Mars, Saturn – where we said hello to Sun Ra – and then headed on out of the Solar System. Milky Way, here we come!

That’s all metaphor, you understand. We didn’t literally do any of that. We stayed right there in the rehearsal studio on Harrison Street in Hoboken.

When we’d landed Wymie, Wendelin, Greg and I went out in the hallway and chatted while Mitch gave Cece a drum lesson. At 2:30 AM in the middle of a cold December night – do YOU know where your kids are?

W W G and I went back into the studio and we ran grandma down. It took a minute or three, but wasn’t so tetchy as the Nat King Cole. Wendelin, however, had problems with it being a grandma who was run over.

But that’s only a metaphor. In fact, Grandma had signaled the Mother Ship. That’s how the crew knew to pick us up when where were touring the Caribbean. Grandma danced a mean tango out there among the stars. 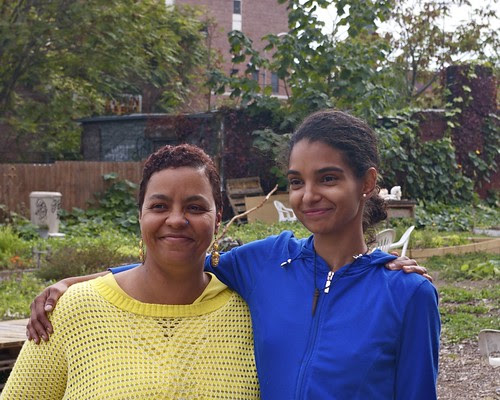 Wendelin on the right; Kelly on the left – another friend, but without a role in this particular story.