Horgan’s The End of Science, a reconsideration, Part 5: Mind-culture coevolution

Horgan has suggested that we are facing the end of science in the sense that science has by now laid down the basic foundations of the world and that, while scientific knowledge will continue to accumulate, there are no more “cataclysmic insights” to be had. If some fundamental questions, such as “How, exactly, does a chunk of meat make a mind?”, remain hanging in the intellectual air (like Wily Coyote suspended in air beyond the edge of cliff?), that’s tough. What we see now is all we’re going to get. Why? Because we’re up against biological limitations to human thought.

I have replied that, no, cultural development has overcome cognitive limitations in the past and may well do so in the future.[1] That is, I accept Horgan’s argument that we face limitations. But I argue that those limitations are set jointly by our biology and by the current state of human culture. While our biology is rightly constrained by genetics, culture is not. Now is the time to say a bit more about culture.

That human minds are constructed has been a commonplace for several decades. It as become a cliché, on ofted abused one. Some thinkers have construed that as meaning that reality is an often arbitrary contraption shaped up by hegemonic cultural elites who are concerned primarily with consolidating and maintaining their power. Hence, science is bullshit! (pardon my French).

In any event, things hadn’t gotten that far when I was an undergraduate at Johns Hopkins where I first encountered constructivism, as it was called, in a course on developmental psychology taught by Prof. Mary Ainsworth. We learned that the prevailing view of child mental development was more or less that children accumulated fact after fact, getting smarter and then, one day, they were adult. Jean Piaget, who was just becoming known in the United States, had a different view.[2] He believed mental development went through stages: Sensorimotor (roughly 0-2 years), Preoperational (2-7), Concrete operations (7-11), and Formal operations (11+). Each of those had sub-stages. Each stage was characterized by specific mental capabilities, with those capabilities accumulating over the course of development. Those capabilities determined the type of mental operations and objects a child could construct.

And so, the world is constructed. In due course I became aware of the more political uses of constructivist ideas, but Piaget was closer to my core interests. I must have read a half-dozen or more books by Piaget by the time I joined Hays’s computational linguistics research group in graduate school. There I learned specific mechanisms through which a mind constructs the world.

Hays was particularly interested in the construction of abstraction concepts. He had proposed that abstract terms got their meaning from stories.[3] Charity was the standard example. What is charity? Charity is when someone does something nice for someone else without thought of reward. Here’s a diagram: 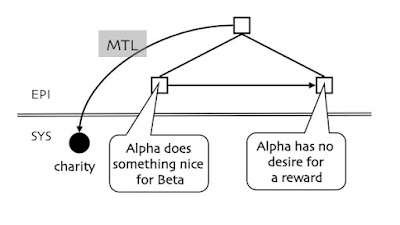 For our purposes we need not go into the technical details of this diagram, which are somewhat obscured by those speech balloons involving two individuals, Alpha and Beta. Those balloons can easily be replaced by richer and more accurate structures. The diagram asserts that charity, at the lower left, is defined by the entire structure at the center and right. We spent a great deal of time working on abstract definitions in the workshop. One student, Brian Phillips, used the concept in a computational investigation of story coherence[4], while another, Mary White, used it in an ethnographic investigation of the belief system of a millenarian community.[5] This conception of a mechanism for abstraction definition is one thing that Hays and I had in mind when we developed our approach to long-term cultural evolution.

That, in turn, brings us back to Horgan, who suggested that we are up against biological limitations in our cognitive capacity. Here’s how I introduced our ideas in my original 1997 essay:

I like this suggestion, and for the most self-serving of reasons: it is consistent with my own thinking. David Hays and I have argued (1990b) that human reasoning has so far been based on 4 different broad classes of paradigms, which we call ranks, with each rank based on a different cognitive process. The processes are ordered such that the process for the Rank 4 paradigms presuppose the processes for the other three; Rank 3 presupposes the first two; and Rank 2 presupposes Rank 1. Rank 1 paradigms are based on the process of abstraction, which is inherent in language. The Rank 2 process is rationalization and it arises in the wake of writing; this is where we find Greek science. The Rank 3 process is theorization and it is grounded in algorithmic calculation; here we find the rise of modern science. Model-building is the Rank 4 process and is grounded in computing. It is this fourth process which Dyson intimates may simply give rise to an entirely new way of thinking about the world.

If one assumes that knowledge is constructed, then one might well inquire about the nature of the tools the mind uses for creating these constructions. Each of those processes requires different mental mechanisms, even different patterns of gross brain activity.[6]

Speech gives us the capacity for metaphor and abstraction, which are mechanisms of Rank 1 cognition. Writing catalyzes the emergence of Rank 2 cognition. Of course, it can be a more or less permanent and readily sharable record of something that has been said, but it is more sophisticated than that. Here’s how Hays and I introduced writing in our core paper [7]:

Writing is critical not only because it allows the In contemplating the written word, scribes and sages begin systematically to think about words, the sequencing of words, and, inevitably, about the mental processes behind words, about thought. They were able to do this because they could see a text as a whole, they could get outside the flow of discourse as no illiterate speaker or hearer could do. They had to do this in order to create and refine the conventions of written discourse. For writing imposes much stricter requirements of completeness and grammaticality to make up for the lack of paralinguistic and contextual clues available in face-to-face conversation, not to mention the ability to question the speaker about anything one doesn't understand. The writer is inherently more self-conscious than the speaker and such self-consciousness is likely to engender thought about writing, language, and ultimately, about thought itself.

While the capacity to formulate discourse about language is intrinsic to language—Roman Jakobson (1961) called this the metalingual function—the use of writing facilitates such metalinguality. For with writing the text becomes a sense-data entity of a much more palpable sort than the airy nothings which carry speech from tongue to ear. Metalingual thus can first be about the text, and then by abstraction about the language and the thought that the text represents. The problem of creating and using a writing system thus moved metalinguality to the point of engendering a new process of thought, rationalization, through the form of metalingual definition.

And, so we argued, it goes with each successive mechanism, algorithmic calculation at Rank 3 and electronic computation at Rank 4. New mechanisms, new modes of thought, new construction of reality.

Consider the following diagram, which depicts this evolution: 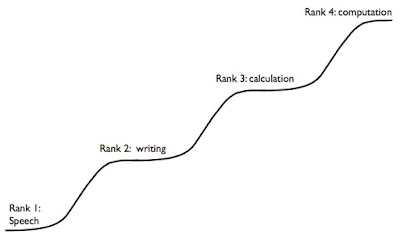 It is an over-simplification in several respects. For one thing it depicts culture as a unified whole, which is not. Culture resides (in the minds of individuals) in groups, and of human groups there have been many. Rank 1 cultures emerged from Africa had covered by globe by ten or fifteen thousand years ago. Various groups changed and evolved according local circumstances and opportunities. Moreover there is change in evolution in various spheres, general thought, the expressive arts, practical technologies, social organization and governance. These spheres do not necessarily change in lock-step.

But I want to focus on a different aspect of that diagram, the apparent timing. It depicts these ranks as equidistant in time. That is surely wrong. We have no direct evidence when full-blown language finally emerged; let’s say it was between 50K and 100K years ago, with precursors perhaps going back a million or more years before that. Writing emerged between 5000 and 6000 years ago. Arithmetic calculation arrived in Europe from the Middle East roughly 1000 years ago and the scientific revolution bubble-up roughly a half century later. Hays and I dated Rank 4 cognition to roughly the beginning of the 20th century, the time of relativity and quantum mechanics – but also abstract art and the modern novel, among other things. If we look at those numbers – crudely, 100,000 years ago, 6,000 years ago, 500 years ago, 100 years ago – the length of intervals between ranks drop precipitously: from 94,000 (R1-R2) to 4600 (R2-R3), to 400 (R3-R4). That’s roughly a factor of 10. If that continued, if it were something like a law (which we never proposed), that would put the interval between R4 and R5 at roughly 40 years ago, two decades before The End of Science.

While we did speculate about a possible Rank 5 in private conversation, Hays and I never published about it. We saw no reason why it wouldn’t be possible. But thinking about thought is hard. That’s why we never published about Rank 5, which we believed to be likely. Here’s the thing: 40 years? That’s just a bit more than a single human generation. Is it possible to reconstruct whole bodies of thought, expression, technology, and modes of social organization so quickly? Considering the intellectual turmoil of the last several hundred years that seems unlikely.

I am suggesting, then, that cognitive evolution runs up against limits set by the time course of human life. It is one thing to study classical mechanics in freshman physics and move on to relativity and quantum mechanics a year or two later. That’s possible because those subjects are relatively mature and have been digested into textbook form. But historically, physicists didn’t move from the one to the other nearly that quickly. The same goes for the other disciplines Horgan surveyed in The End of Science. They’re all backed up against a limit set by the time people need to learn existing modes of thought in full depth and then to go on to invent new ones.

I am reminded of a sentence in a recent article about the future of computational linguistics: “To understand the future of our field, we need to understand its past, which we will describe as tribes of researchers migrating through a changing conceptual and socio-economic landscape.”[8] So are we all. It appears to be chaotic and aimless, but that’s no reason to believe, as Horgan seems to, that we’ve come to the end of significant – that is to say, “cataclysmic” – discoveries.

Human biology is relatively fixed on a scale of decades and centuries, but cognition and culture are not. The human mind can evolve even as human biology remains the same. It is not bound by the limitations of that biology.

[6] This blog post is a guide to that work, Mind-Culture Coevolution: Major Transitions in the Development of Human Culture and Society, New Savanna, July 4, 2020, https://new-savanna.blogspot.com/2014/08/mind-culture-coevolution-major.html.