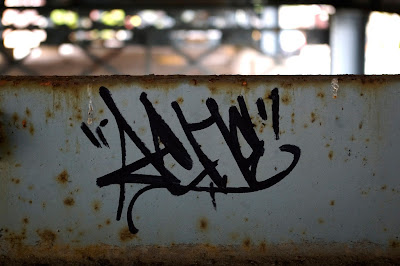 I’ve been thinking about my post of April 9, Courts decide that graffiti is REAL – Meaning and identity in graffiti, skateboarding, and on the web. I’ve been tinkering with it since I had originally posted it. The title has changed a bit (I forget what the original title was), the final three paragraphs (after the asterisks) weren’t there, and some other changes. The effect is to give the piece an emphasis on identity and meaning that I didn’t have in mind when I’d originally written it.

The piece needs to be rewritten, reframed with that in mind. But I don’t want to do that now. Instead I offer some observations.

In the first place, graffiti IS about identity. Graffiti is built on the name, not the writer’s legal name, but the name they take as a writer, e.g. TAKI 183, SEEN, DONDI, etc. The objective was/is to get your name out there as widely as possible. As CAY 161 told Norman Mailer a half-century ago, “the name is the faith of graffiti.” Because these names are not legal names, they cloak the writers from ordinary (‘legitimate’) society while revealing their presence to the graffiti community, thus setting the graffiti community apart.

In particular, the graffiti community originated outside the regular art community, with its institutions of schools, galleries, and museums, and has had and still has at best a problematic relationship to that world. But it has become the accepted graphic style of hip-hop and extreme sport. The legal decision in the 5Pointz case grants legal recognition to the rights of graffiti writers and their art and represents acceptance of graffiti by the institutions ‘legitimate’ society.

[I need a better term than ‘legitimate’ society. Is there one? What about coining a new one? Later.]

The world-wide web and, in particular, social media, present a different picture. They have arisen within the commercial communication and media infrastructure of the what I’m an calling legitimate society. But the present individuals with a new arena in which they can develop an identities. This is most obvious in the opportunity to create one or more user names that are distinct from one’s legal name, thus introducing an element of opacity between one’s online identity or identities and one’s ‘real’ identity in ‘meat-space.’ Much of the friction and anger that exists in social media is directly tied to the dynamics of identity formation and elaboration. Cancel culture and wokism are dependent on it, as are a whole range of conspiracy theories. The online world abounds in the elaboration of alternative construals and constructions of reality.

At the same time, as people navigate the online world they throw off streams of data that are gathered and sold by service providers. The same data can be used for surveillance by the state. What ownership rights to people have in the data about them? And the moment, few to none.

To a significant extent, these issues exist around and about and outside the boundaries of existing law and institutions, as graffiti originated outside ‘legit’ institutions. Do-it-yourself skate parks, like FDR in Philadelphia, are similarly outside those institutions. While skate boarding doesn’t present the acute identity that graffiti, by virtue of its emphasis on the name, presents, it originated outside the existing institutions of organized sports and so has had to struggle to establish itself. The existence of DIY skate parts is a manifestation of this status. The inclusion of skate boarding in the (now postponed) 2020 Summer Olympic Games represented recognition of skate boarding.