Bumping to the top of the queue because it is relevant to my current interests (the impossibility of brain-to-brain thought transfer).

And student-centric pedagogy in which learners attempt to make meaning of texts together isn't as new as social media. Dewey, Freire, Vygotsky and others pointed in that direction.

I’m not sure what he had in mind with that reference to Vygotsky, but Vygotsky is one of the seminal 20th century thinkers about language and mind and has had a strong influence on me.

Vygotsky argued, in effect, that thinking – considered as a quasi-verbal voice in the mind – is just internalized speech. The young child learns to speak to herself as others speak to her and thereby gains a mechanism affording some control over her mind. We can contrast Vygotsky’s view with the somewhat later view of Noam Chomsky, the linguist, who regarded language as primarily an instrument of thought and only incidentally an instrument of communication. On the contrary, Vygostkians argue, we can think (in the sense of talking to ourselves) because we can communicate.

I’ve already got a relatively brief post on this elsewhere on New Savanna: Thought as Inner Speech. In this post I excerpt a long article published in PSYART: A Hyperlink Journal for Psychological Study of the Arts: First Person: Neuro-Cognitive Notes on the Self in Life and in Fiction. When reading this excerpt keep two things in mind. First, there is no deliberate instruction going on. For the most part we acquire language without being deliberately taught; we just “breath it in.” The child is not, in this process, imitating the adult (or other speakers). She’s internalizing.

Think of the process Vygotsky describes in terms of the scaffolding metaphor that's currently all over the place. The adult's speech scaffold's the child's behavior, both in action and perception. Then the child learns to use her own speech to scaffold. Finally there's no need for external scaffolding, that is, no speech either from an adult or from the child herself.

Vygotsky on the Emergence of Thought as Inner Speech

Given this conception of self and language I now want to turn to Vygotsky's conception of thought as inner speech. The general idea is that as others direct the child's actions and perceptions through language, so the child learns to use language in controlling herself (Vygotsky, 1962; Luria, 1959). In effect, the child peoples her brain with an other and uses that other as a mechanism to control her own mind.

When a young child is requested to do something, the linguistic channel in the child's brain analyzes the acoustic input and activates the appropriate cognitive and perceptual schemas. The command "come here" will activate a plan for locomotion while the command "look at the bunny" (see Figure 1 for an informal representation) will activate a plan for seeing. The child knows that she is to execute the command because of the intonation pattern (Jakobson's conative function, 1960), which, presumably, is grounded in the various neural systems subserving social interaction. Upon receipt of that intonation pattern, the child's motor system is prepared to execute a pattern. As the content of the utterance is decoded the motor schema, whether for moving her body or looking in a certain direction, is executed. This sounds as though the infant is helpless in the face of intelligible commands from others, that she has no choice but to execute them. Initially, I believe, this is the case. The motor control center has no way of distinguishing between a command originating in the brain of another and a command originating within the child's own brain. Once the ability to make the distinction is learned, the word "no" enters the child's vocabulary as a means of marking autonomy (Church, 1966, p. 101).

Not only can the child listen, she can also speak – though there is a lag between the child's capacity to understand language and the child's ability to produce it such that the child can understand more than she can talk about (Lenneberg, 1967). If the child's utterance contains a command directed toward herself – and there is evidence on this (Vygotsky, 1962; Luria, 1959) – then she is using language to direct her activity in the way which others use language to direct her activity (see Figure 2). The route from acoustic analysis to the execution of the action is the same in both cases, only the utterance's point of origin is different. In one case the utterance originates with another, in the other case with the child herself. 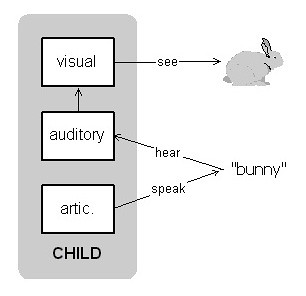 Figure 2: Child talking to herself about a bunny.

The next developmental step, so Vygotsky's account goes, is that the child's self-directed speech becomes silent and internal (see Figure 3). In a word, it becomes what is ordinarily known as thinking (Benzon, 1976a, cf. Lamb, 1998, pp. 181-182). Given that this process starts with language which others direct to the growing child and involves mental structures for coordinating language and social interaction, this would make thought, so understood, to be an inner dialog between virtual persons. It is thus not surprising that, in his investigation of the metaphor system governing folk conceptions of the self, George Lakoff (1996) found that we conceive the self to be a multiplicity of agents. And when we leave the world of folk psychology and enter the world of psychoanalytic thinking we find that the superego, the inner agent of social norms, develops as an internalization of parent figures (for example, see Freud, 1960, pp. 18-29; Erikson, 1963, pp. 256-57). 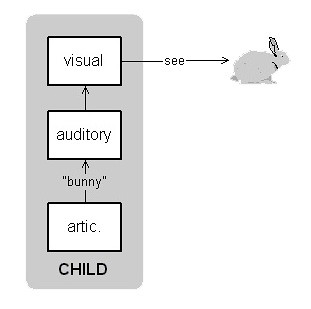 Figure 3: Child thinking about a bunny.

Let us then assume the existence of the mental machinery responsible for the process Vygotsky has outlined. This machinery operates on the self-structure as described in the account of personal pronouns. In the context of this more sophisticated machinery the ego and alter nodes are variables. Let us assume that this machinery creates what Gilles Fauconnier (1994) calls mental spaces; a mental space is an occasion for thinking, speaking, or writing [Note 9]. It is a temporary event; neurologically it would correspond to a particular pattern of brain activation.

[Note: the talk of ego and alter variables in the following paragraph refers back to an earlier section of the original article. Just read through it.]

A mental space can be real or hypothetical (Lakoff, 1996, pp. 95 ff.). A real space is one representing real events, whether immediately present or recalled from the past. When activated in a real space the ego variable is set to equal the self-image while alter is set to equal the person with whom one is talking. This means that all the knowledge one has of that other is brought into play, whatever that means, through the operations of the alter variable. And, of course, all the knowledge one has of oneself is brought to bear through the ego variable. One constructs a hypothetical space to consider hypothetical situations about real people or, possibly, imaginary events about completely imaginary folks. When activated in a hypothetical space ego can be set to equal any person, as can alter. In particular, it is possible to set both ego and alter to the same value. When one is just thinking, ego and alter may both be set to the self-image, thus making such thinking into a conversation with oneself. When one is watching a performance of Antony and Cleopatra, ego may be set to Antony while alter is set to Cleopatra, or Caesar, or Enobarbus, whomever Antony is interacting with at the time – a matter we'll take up in the next section.